When It Comes to the ultimate theatrical experience, the play’s the thing. The arc of the characters and the story, the rising action, the dramatic climax, the final resolution—all of these elements are what make live theater so singularly enthralling that you don’t even notice you’ve been sitting there for two hours. Now, imagine getting all of that in just 10 minutes. That’s the goal of a Ten Minute Play Festival. A playwriting contest format that’s been around for decades, it was recently brought here to Bainbridge by our own Island Theatre, a local group that “brings literature to life” with staged readings throughout the year.

Sponsoring a Ten Minute Play Festival was the brainchild of board member Sara Scribner. “I wanted to give local playwrights a chance to see their work produced,” Scribner explained. She knows of what she speaks, since she herself is a playwright who has sent her own full length plays to national contests over the years. “I also knew that writers could commit more easily to writing a 10 minute [rather than a fulllength] play.” It may be an easier commitment, but it’s still a writing challenge.

“Every word counts,” Scribner said. “You have to introduce your characters, develop the story and give it an ending in just 10 minutes. It’s harder than it sounds.” Hard, but not impossible, and sometimes a whole lot of fun. Over 50 plays were submitted and then blindly judged in either the adult or teen playwright category. On two consecutive nights in August, 14 plays were produced, including the two winners: “I See France” by Wendy Wallace and “There’s a Goblin in My Kitchen” by 16 year old Bainbridge High School junior Megan Gleason.

Beyond the challenges of condensing a play to just 10 minutes, there’s originality to consider. For Wendy Wallace, using lingerie as a metaphor for women’s body issues, as well as the way they relate to one another, was the “foundation” from which she worked. “When I open the drawer, my underwear talks to me,” Wallace said. She considers her play, which featured three actresses portraying pairs of lacy undies, cotton hipsters and full on granny panties, a “comedic exploration of beauty, aging and female friendships in the lingerie department.”

For Wallace, the play spoke to the feminine obsession with looks. “So many women put all their value into that. As they get older, their perspective changes, but I wanted to highlight the struggle women go through in relating to each other.” As for the short format, Wallace rose to the challenge. “You’ve really got to come in in the middle and get to the action right away. You can’t go at it in a slow, meandering, novelistic sort of way.” For Megan Gleason, winning her category was definitely a highlight of her five year writing career, which began in sixth grade.

“This is the second play I’ve written,” she explained. Her first, a one act play, was the product of a BHS partnership with Seattle’s ACT Theatre. For Gleason, the 10 minute format was welcomed. “I wasn’t intimidated by the structure; I think writing a full length play would be a lot scarier.” For subject matter, she turned to something familiar to almost all teenagers: the awkward relationship. But she initially thought her play lacked pizzazz. “Once I got it on paper, it seemed boring, and I tried to figure out what I could do to make it more exciting.

The idea of a goblin kept coming into my head.” In the end, she used the goblin (played by local children’s book author George Shannon) as the magic that ignited her boy meets girl and decideshe’s not a nerd after all story. If the two nights of packed houses were any indication, the Ten Minute Play Festival will be back. Based on the audience’s laughter, applause and sometimes silently rapt attention, islanders had big appreciation for these tiny tales. Bravo to Island Theatre for showing us that great theater only takes 10 minutes! 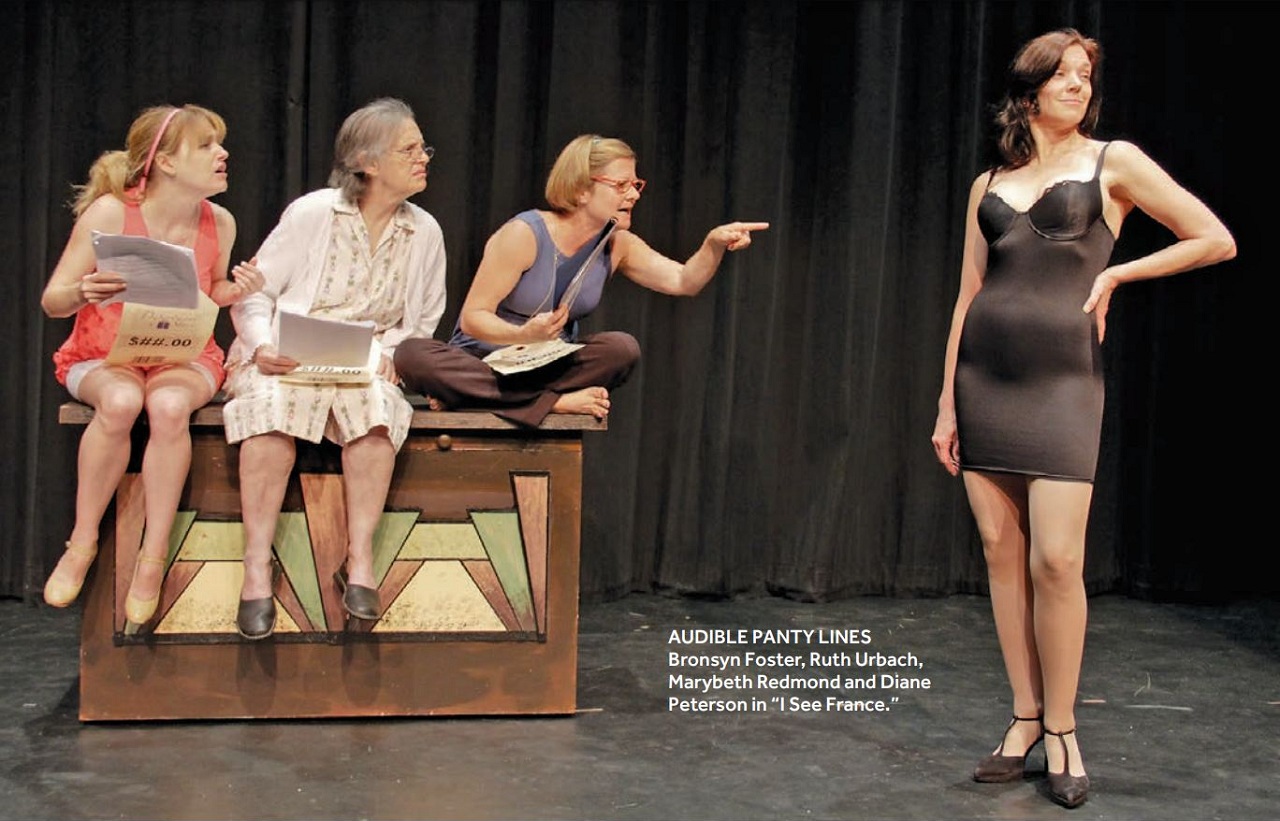 At This Stage // Actress Turns to Public Service for Personal Healing