Peruse the playbill from “Mary Poppins” by Bainbridge Performing Arts (BPA) or “Young Frankenstein” by Ovation! and you will notice many family names showing up more than once within the cast of characters. Parents and children, brothers and sisters, husbands and wives, each with a part, acting together to put on the shows we love to attend. What is it about the days spent memorizing lines, long hours of rehearsals, learning dance choreography and song lyrics that draws these families to the theater? We went behind the scenes, quite literally, to find out from several families what makes playing together in Bainbridge Island’s vibrant community theater so much fun.

It all began for the Eldridge family when they moved to Bainbridge in 2009. Matt Eldridge and Joy Koumans were looking for an entertaining, affordable summer activity for their two kids, Bentley and Sophie. When they found the BPA Theatre School’s summer program practicing for a production of “101 Dalmatians,” they knew it was a fit for the kids. The siblings stuck with the theater classes until they auditioned for their first mainstage show, “Hansel and Gretel.” “We got into the exciting stuff with kids and adults. Now we can’t stop,” said 12-year-old Sophie, who went on to play Jane Banks in BPA’s performance of “Mary Poppins” in 2015.

“There’s nothing I don’t like about it,” said 14-year old Bentley, who not only acts but also sometimes helps out as part of the lighting crew. “I always want to know, ‘When’s the next show?’” he added. Bentley has recently begun applying what he’s learned on the stage to writing and directing short films, including one that debuted last summer at the San Diego Film Festival. Eldridge had been performing in summer Shakespeare plays like a “A Midsummer Night’s Dream” and “Twelfth Night” at Bloedel. “I went to a BPA show and was impressed by the production value and how it was all put together,” he remembered. Soon after, he was auditioning alongside the children for roles in “The Little Mermaid” and “Mary Poppins,” in which he played the father, George Banks, opposite his own daughter.

While Sophie enjoyed the character’s freedom to yell at her father, Eldridge took a longer view of the experience. “These are memories that will last a lifetime,” he said. Koumans was so moved by what her children were gaining from their participation in theater that she joined the board of trustees for BPA. “I have watched how they have matured being in a production,” Koumans said. “They are learning more than the core performing arts. They’re learning to work on a complex project with a large team of diverse people to bring a meaningful story to life.”

The Riedel sisters, Chyna and Myriah, began acting in grade school in the Kitsap Children’s Musical Theatre. After their mother encouraged the sisters to try a host of different activities, it was the theater they liked the most. “Acting has been a way for us to do things together,” Chyna said. “We get along really well,” she added about their offstage relationship. In fact, the sisters work side by side as hair stylists at Phoenix Rising on Bainbridge. Myriah, who has performed in 40 Bainbridge Island musicals, credits acting with helping her to find her voice. “I remember one of my teacher’s called me a wallflower,” she said. “I’ve watched kids that are shy come out of their shells in the theater.”

The now 20-something sisters have acted together in 10 plays on the island, including Ovation!’s “Fiddler on the Roof” as well as last summer’s hit, “Young Frankenstein.” “Being in theater, we really bond with each other. The cast becomes family. You have to develop a trust that each person will play their part,” Chyna said. And that may be the greatest attraction for families playing together in theater—the chance to make family connections even stronger. 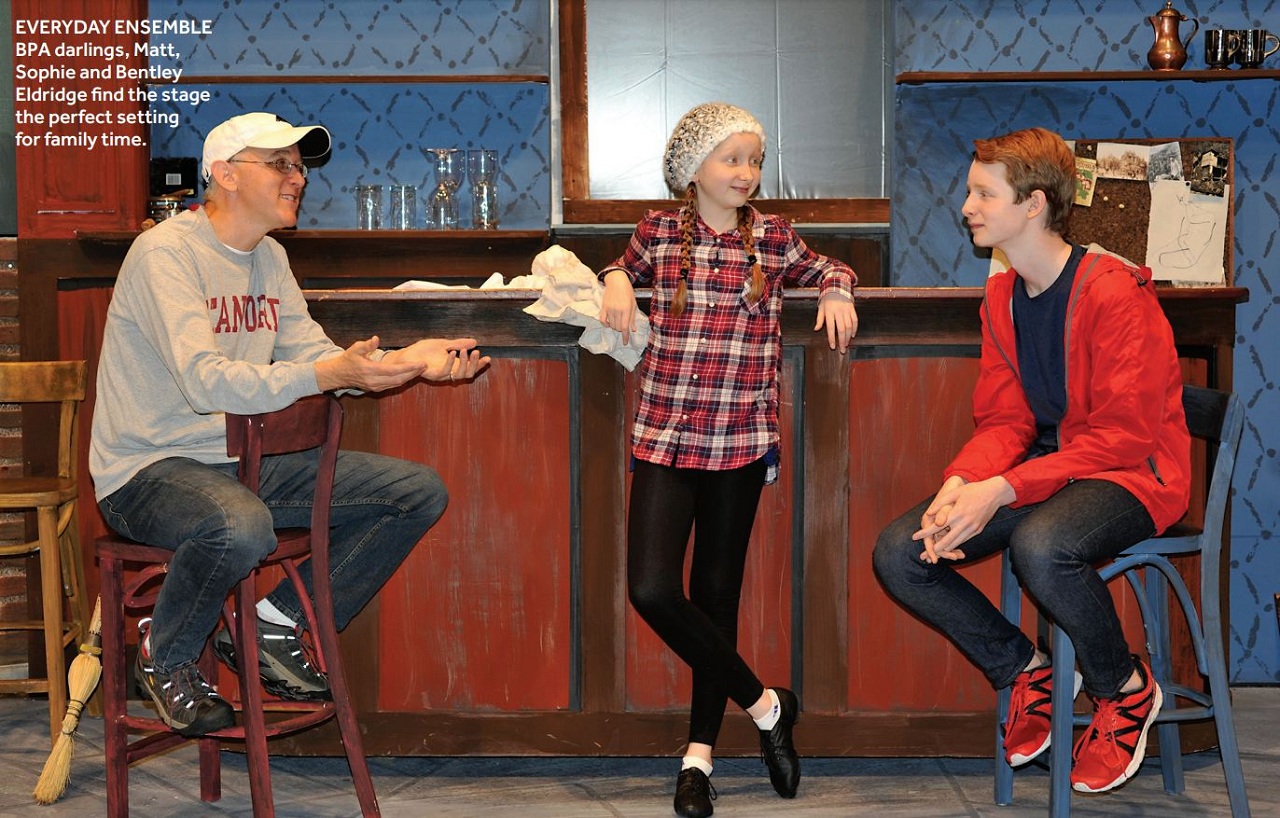