At This Stage // Actress Turns to Public Service for Personal Healing

You may know her as an actress, writer and director, but Dinah Manoff sees herself as a mother and teacher.

Having grown up between New York and Los Angeles, Manoff left the “factory town” of Hollywood 13 years ago with her husband, Arthur Mortell, to raise their three boys on Bainbridge Island. She now teaches acting at Bainbridge Performing Arts and, as of two years ago, at the Purdy Corrections Center for Women in Gig Harbor.

“I really fell in love with teaching,” Manoff said. “I thought, ‘Wow, this is my calling.’ I love being able to help people express themselves in ways they didn’t know they were able to, and laugh at themselves and find their creative juices.”

Passionate about teaching acting to people who have never tapped that part of themselves before, Manoff had long wanted to bring improvisation to women’s prisons as a way to encourage the inmates to find a voice and outlet through acting. Then life took a sudden and tragic turn when her oldest son, Dashiell, died in an automobile accident while returning to Washington State University in early 2017.

“After Dashiell died, I was in so much pain and grief that I felt the only people I could be around were people who were also suffering,” Manoff said. People who had their own difficulties but knew nothing about hers.

Moving forward with her idea to bring the art of acting to women in prison was a way to cope, “to put one step in front of the other.”

She went to see a play at Purdy, directed by friend and founder of Seattle’s Freehold Theatre Robin Lynn Smith, who had been running a program at the center. Islander and playwright Elizabeth Heffron wrote the play.

“It was marvelous,” Manoff said. “Smith and her colleagues take a group of women all the way through production to writing their own play, costuming, doing the sets, and it’s really powerful; they become in-house mentors for these women.”

Manoff met with Sultana Shabazz, who was then educational director at Purdy and is now the administrator of educational services for the Washington State Department of Corrections. She pitched an eight-week curriculum that she proposed to teach alongside friend and assistant Michelle Allen. Shabazz asked Manoff to participate in Purdy’s High School 21 program, which is designed for offenders who have not earned their high school diploma and need fine arts credits.

Manoff said it is also transformative for the women she teaches.

“I find that the first class is them with folded arms and sour expressions on their faces and being tough and shut down, and by the time they get through eight weeks, they’re raising their hands to volunteer and get on stage,” she said.

While the women at Purdy have personas that they have to protect, acting is about being vulnerable. So, Manoff said, she tries to create a space where they can do both.

“I let them dictate how far they’re willing to go,” Manoff said. “Some of them are talented improvisers. Some of them have beautiful singing voices. Some can write. And some of them are a great audience for the people that are up, and they have something to contribute. We try to use everyone and meet them right where they’re at.”

Purdy now has a creative writing program, taught by screenwriter and producer (and Bainbridge Islander) Renee Longstreet, and Manoff said they’d like to add an art history course.

When asked about any danger she faces by teaching at a prison, Manoff said she considers it safer than shopping at the Silverdale Mall.

“Mostly, we have fun,” Manoff said. “We had a woman come up to us after the second class of our session, and she said, ‘This is the first time I’ve laughed in a year. Thank you so much.’ And I thought, that’s it. That’s enough. That will keep me going for a year.” 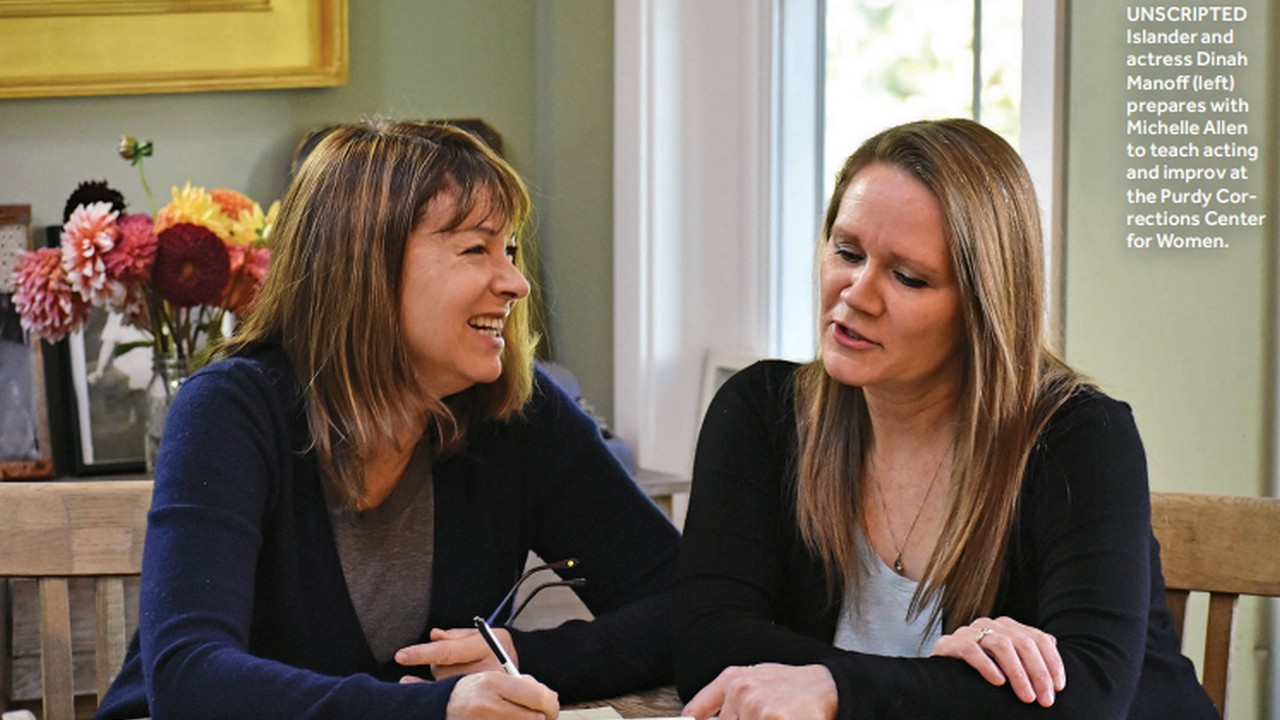