Advice When in Bainbridge Island

During peak tourist season, free advice and resources including maps, brochures and regional information can be found at the Visitor Center kiosk at the ferry terminal in Bainbridge Island.

Additionally, free advice and resources including maps, brochures and regional information can be found at the Bainbridge Island Chamber of Commerce office during normal working hours.

Below is a map displaying all Bainbridge Island Parks. Click on a green park to see more details and pictures of that park.

The western loop includes parks, restaurants, marinas and a chance to view some of the island’s historic sites and trees. People usually walk the 2-mile loop in about an hour. Ample shortcuts are available for those pressed for time.
The eastern loop goes through a residential neighbor- hood and then along the beach at Hawley Cove, ending with a path into a wooded area. For most walkers, the 1.5 mile round trip takes less than an hour.

Bicycles can be rented near the ferry terminal, as can an assortment of boats at Waterfront Park. Coffee cafes and restaurants abound along the western Waterfront Trail. A grocery store and picnic benches can be found for those who would rather pack their own. (The grocery will even recycle your empty bottles.) 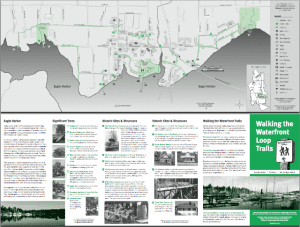 Produced by the City’s Non-Motorized Transportation Advisory Committee, this is the first map to show all the public trails on Bainbridge, and includes four map insets for the most recently developed trails. Recommended kayak launch points and other shore access areas are shown, as well as the mean low tide. Selected photos show the variety of users and scenery across the island.

Traffic volumes and shoulder widths are shown for primary roads, allowing people to choose the sort of routes they prefer based on their own skill and interests. Chevrons mark the steeper grades, and contour lines give a feel for the lay of the land.

The Bainbridge community supports active transportation and recreation. We take pride in our “Bainbridge Shares the Road” signs proclaiming a culture of mutual courtesy and safety among people using all modes of transportation: pedestrians, cyclists, drivers, people with disabilities and equestrians.

This map celebrates the collaboration between the City, Park District, Open Space Commission, and Bainbridge Island Land Trust, as well as numerous donors and volunteers who are actively growing our system of greenways. 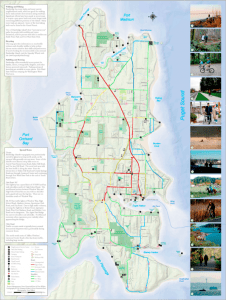