Friends support us in the most amazing ways. Sometimes they even go overboard.

When Olivia Carey, beloved trainer at Island Fitness known for her joyful demeanor, was diagnosed with stage 4 ovarian cancer in 2007, that grim news motivated seven friends to rally behind her in a unique way—they took a plunge in the Puget Sound.

They swam. And swam. In fact, the aqua-minded friends swam so far, they stitched together a 30-mile swim around Bainbridge Island, raising $14,000 through pledges and donations to offset Carey’s staggering medical expenses.

Putting their best foot— and stroke—forward ultimately led to a nonprofit organization to benefit others with serious illnesses and financial burdens. Over the following two years, they took their charity to the next level, spreading the word and coalescing its goal to help other islanders like Carey. And so was born Arms Around Bainbridge (AAB).

August marked the 10th year for the successful swim that skirts Bainbridge’s shoreline. Most of the roughly 30 people who swim the event pay a $100 registration fee and swim just a small section of the island—accompanied by a kayak and buoyed by dollars pledged for their brave feat. Though last year, Seattle marathon swimmer Andrew Malinak donned his wet suit and completed the entire 30 miles around the island.

Only a few participants swim face first into jellyfish. Most enjoy seeing the starfish and the seals that follow. Some are even tailed by Dall’s porpoises in the frigid waters. Last year, an 11-year old girl swam with her dad to help raise awareness. Not up for the plunge? AAB welcomes kayakers to register to escort swimmers with a goal of a one-to-one ratio for optimal safety. No matter how or why they participate, everyone gets something special out of the event.

“When I swam that first year, I thought I was doing it to challenge myself,” said participant Meg Batson. “But when I dropped off my registration, I met Olivia Carey, the first AAB recipient. She gave me a hug and thanked me for supporting her. I was overwhelmed. The ability to help a fellow community member is an honor. Honoring their courage is why I swim.”

AAB works to tailor its giving to fill each recipient’s needs. One time it was a car. Another a recliner. Sometimes it’s basic, like putting food on the table or keeping the lights on. Often, it’s helping with medicine or transportation. “I would not be standing here without Arms Around Bainbridge,” said Nellie Thomas. “They are a lifesaver. I’ve been their longest recipient, struggling with stage 4 breast cancer for five years. The support I’ve received has been in so many forms—I can’t even count. I am overwhelmed with gratitude.”

The list of recipients has grown over the years, as have the people who contribute cash, goods and services. “It really resonates with people,” said AAB board member Heather Burger. “Everyone already knows someone with cancer. They get it. It’s not hard to ask for money.”

Although the around the island relay swim is the organization’s primary event, other activities have been added to bolster fundraising. Bingo Night in January features homecooked food, prizes, music, comedy, a great emcee, paddle call and brief sharing. Local photographer Pete Saloutos contributes in his own way, each year donating beautiful photos, often of local subjects, for a calendar that benefits AAB. In 2015, less than a decade after its inception, AAB raised a whopping $121,400.

Tears came to Burger’s eyes as she shared a story about Melanie Sattler, an AAB recipient who was very sick. The two had spent a lot of time together, and even though Sattler had no background in swimming, she announced that she wanted to participate one August. Typically, the recipients don’t or can’t do the swim, but Sattler was fearless. She swam a half-mile leg, a powerful show of passion, ending in Blakely Harbor. Her kids were there when she got out. “She was so grateful for that experience, and the support,” said Burger. Sattler died six months later.

AAB is a reflection of the kind and generous community in which we live. A safe harbor. The AAB swimmers and paddlers should indeed inspire our collective arms to stretch a little farther and hold a little tighter. 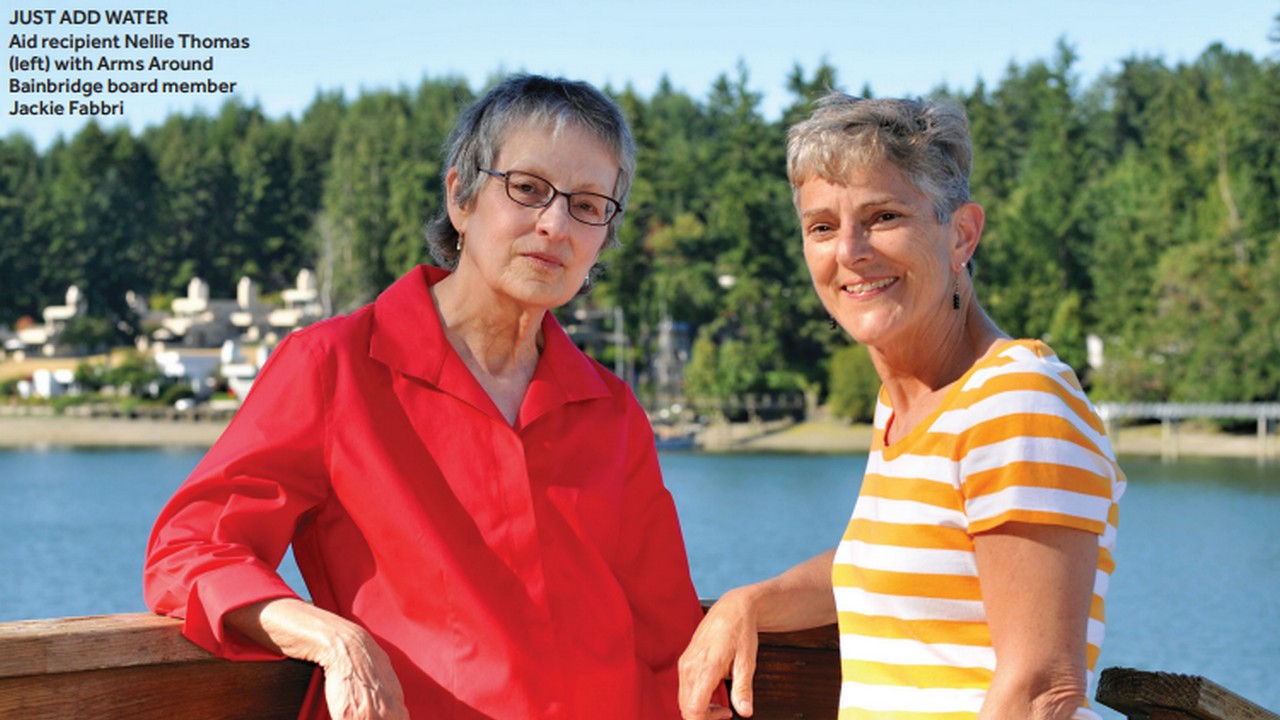