You know when you meet someone who’s so smart and so inspiring that it makes you wonder what the world looks like through his eyes? That’s what it’s like to be around Michael Jensen. And he’s curing pediatric cancer. Seriously. A pioneer in the field of immunotherapy to battle childhood cancers—like leukemia, neuroblastoma, medulloblastoma, and sarcomas—Jensen began his work early on. At just 16, the Mercer Island teen paid a visit to a neighbor, Professor Philip Greenberg, and asked to work in his lab. He started the following Monday. Friends and colleagues still today, the two work side by side and are scientific co-founders of Seattle-based Juno Therapeutics, which is developing transformative cancer immunotherapies.

“We now have clinical results where we’ve treated children, their bodies are cancer-free and they’ve had side effects comparable to having the flu for the weekend,” said Jensen, who has lived on Bainbridge since 2010. “In the future, we want them back on the soccer field within weeks of being cured.” Jensen noted that Seattle has become an epicenter for immunology study because of cooperation between the Fred Hutchinson Cancer Research Center, University of Washington and Seattle Children’s Hospital, where Jensen is the founding director of the Ben Towne Center for Childhood Cancer Research.

“Kids are growing so their bodies are vulnerable to the toxic side effects of conventional cancer treatments,” said Jensen, whose grandfather Claus Vogelius Jensen was instrumental in the development of the vaccine that prevents diphtheria, once a major childhood killer. “That’s why developing immunotherapy specifically for children’s cancers is so critical.” Jensen explained that the traditional therapies used in pediatric oncology are over 30 years old. “The chemo, the radiation, especially where children are concerned, is antiquated and it’s brutal,” he said, maintaining that many families come to fear the treatment more than the disease itself.

“We found that we could harness the power of the immune system,” said Jensen, explaining that an essential player in immunotherapy is the T cell, a kind of white blood cell. “When you’re healthy, T cells usually identify and kill infected or abnormal cells, including cancer cells. What we do in immunotherapy is to reprogram a patient’s own T cells so they attack the cancer cells.” The nascent therapy—its breakthrough came about three years ago, when labs started treating patients with end-stage leukemia—involves harvesting blood from a cancer patient, and then through genetic engineering, inserting a gene into the T cells so they can recognize cancer cells. After growing the cells to the appropriate dose level, the cells are then infused back into the patient.

“The great promise of what we’re doing is that it’s specific and has the potential to use the body’s own immune system to eradicate the cancer,” said Jensen, his humble smile turning brighter as he explained. With such remarkable preliminary clinical results, Jensen now spends a good amount of his time traveling stateside and abroad giving scientific lectures (including a TedX talk last year), participating in community outreach and fundraising. Jensen pointed to a lack of financial support for stalling the advancement toward a cure for pediatric cancer, a disease for which at any given time, 40,000 children are receiving treatment in the United States.

“It’s not for lack of ability to do the research,” he said. “The fact is that pediatric cancer researchers receive just three percent of federal funds allocated to cancer research, which really hobbles the potential progress.” Jensen’s ability to deliver a complex scientific message in such an accessible way speaks both to his intellect and to his personal emotional investment. It’s also just plain inspiring. His enthusiasm for his work gives you the sense that the field of childhood cancer research is on the cusp of something amazing.

For Jensen, his inspiration is the kids. “Patients who have lost the battle to cancer stick with you forever,” he said, “but when you get a Christmas card from someone who’s healthy and cured and has their whole life in front of them, there’s no doubt we’re doing the right thing and that we have to keep going.” 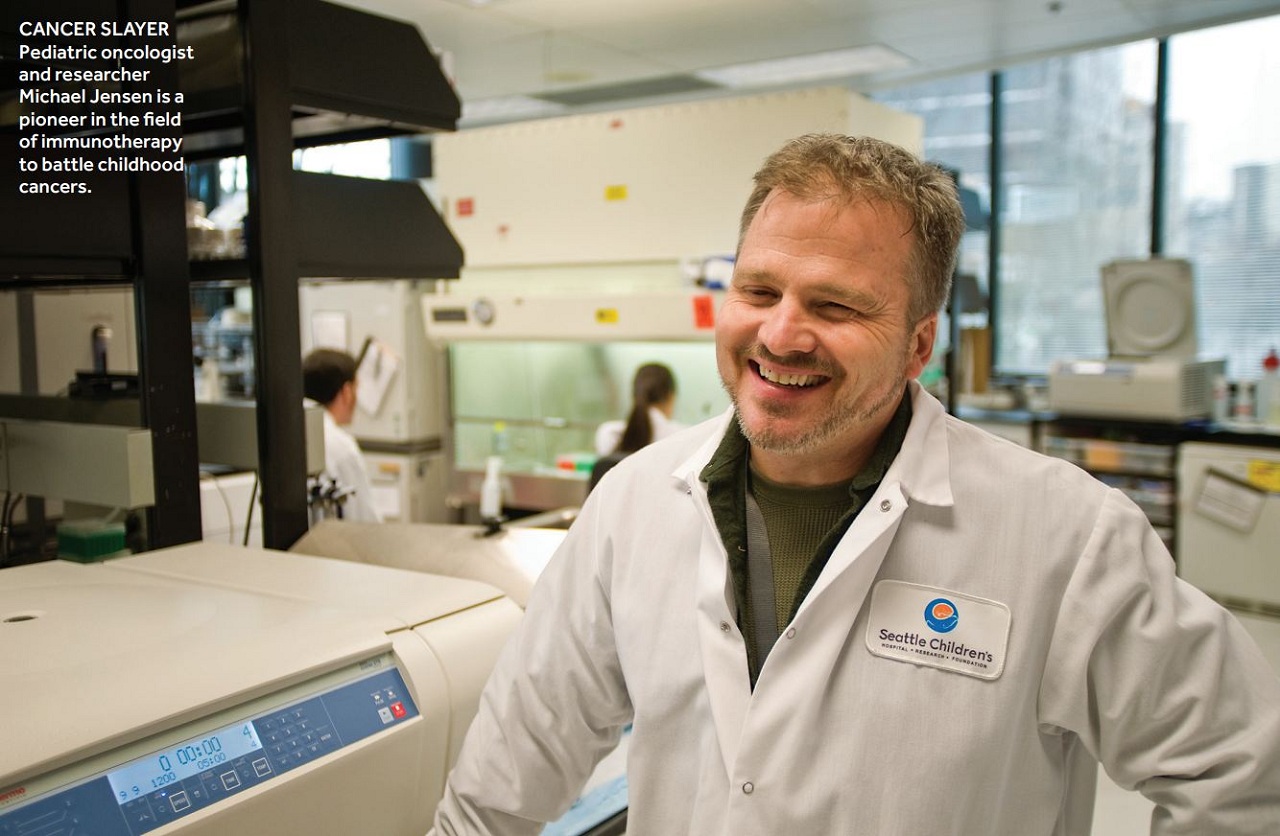