None of the three friends wanted to admit to coming up with the idea of swimming across the Strait of Juan de Fuca, but when pressed Ken Goodman, 60, Orlando Boleda, 59, and Paul Webber, 56, cast the blame on each other. They are still trying to figure out exactly why they did it. “It’s in our neighborhood,” Boleda said in a slow drawl. Webber admitted, “I don’t think we recognized the magnitude of the challenge.” Prior to the trio’s success on September 19, only seven others have made the more than 12-mile swim between Washington and Vancouver Island, Goodman said.

On that day, the three Bainbridge men also became the oldest successful swimmers. Swimming the strait involved proper planning and a hearty respect for the challenging conditions. Goodman noted that the water temperature varied only a few degrees on the day of the swim—between 50 and 53. Boleda said that the cold “induced pain at the cellular level.” There were also tides, strong currents, westerly winds, waves, kelp, “jellies,” nosy seals, the occasional container ship and orcas to worry about.

The three Masters swimmers were quick to downplay the dangers of swimming the strait, quicker at dismissing their achievement, and quickest at giving most of the credit to their support crew—including the kayakers who shadowed them. They also are surprised at the attention they’ve received. “I don’t think of it as such a big deal,” Boleda said. “Water is my element.” The three men are experienced swimmers, with more than a few open-water swims under their belt in the past decade. In 2007, they swam around Bainbridge Island, and in 2008 they swam to Seattle and back. The strait was the trio’s longest and coldest swim to date.

Boleda reached the Canadian shore first, west of Beechey Head on Vancouver Island, at 1:53 p.m.—making the crossing in 6 hours and 58 minutes. Webber finished at 2:05 p.m. Goodman gratefully touched ground at 2:40 p.m. Webber and Goodman clearly enjoy teasing Boleda about his thin frame, but on that day in September hypothermia was on everyone’s minds. Severe hypothermia can cause death. An hour into the crossing, Boleda felt like he was “sucking pond water.” In layman’s terms, he was pretty miserable, despite wearing a wet suit and despite the warm broth and honey water the support crew offered him.

“He was shaking [from the cold],” Webber said. “We were worried.” That wasn’t even the hardest moment for Boleda and Webber. That came in the morning, before the swimmers left Freshwater Bay, just west of Port Angeles. There was something about staring down the strait, Webber said, that was sobering. Boleda described the sky and sea as monochrome. He couldn’t tell where the gray sky ended and the gray waters of the strait began. Goodman, the quietest member of the trio, seems to have weathered the strait the best. At one point during the swim while he was treading water, he thought to himself, “This is so cool. Sublime.”

“We had phenomenal conditions,” Webber said. “It ended up all going our way.” Other swimmers haven’t been as lucky. In 1999, Peter Urrea abandoned his attempt after he was surrounded by a pod of pushy orcas. Last year, Andrew Malinak, 26 at the time, attempted the crossing. Pulled off course by the current, the seasoned swimmer was forced to quit. Goodman said that Malinak was in a different league: He wasn’t wearing a wetsuit, the water was colder, he didn’t touch his support boat when he stopped to rest and feed, and he was alone in the water.

Malinak, who wrote a blog about his experience, estimates that there have been more than 85 failed attempts. Goodman, Boleda and Webber were wearing wetsuits, and they had each other for support. “I never felt alone,” Goodman said. Seven years ago, the three friends helped organize Arms Around Bainbridge, a charity that provides financial support for people who are struggling with a life-threatening illness. The nonprofit is a source of pride for the three swimmers—maybe even more than the Juan de Fuca swim.

Their next open-water swim is scheduled for New Year’s Eve at Manzanita Bay. After that, who knows? Boleda mentioned the Strait of Gibraltar, and Goodman and Webber looked thoughtful. What is certain is that one of them will come up with the idea. And then, the other two will enthusiastically jump in. 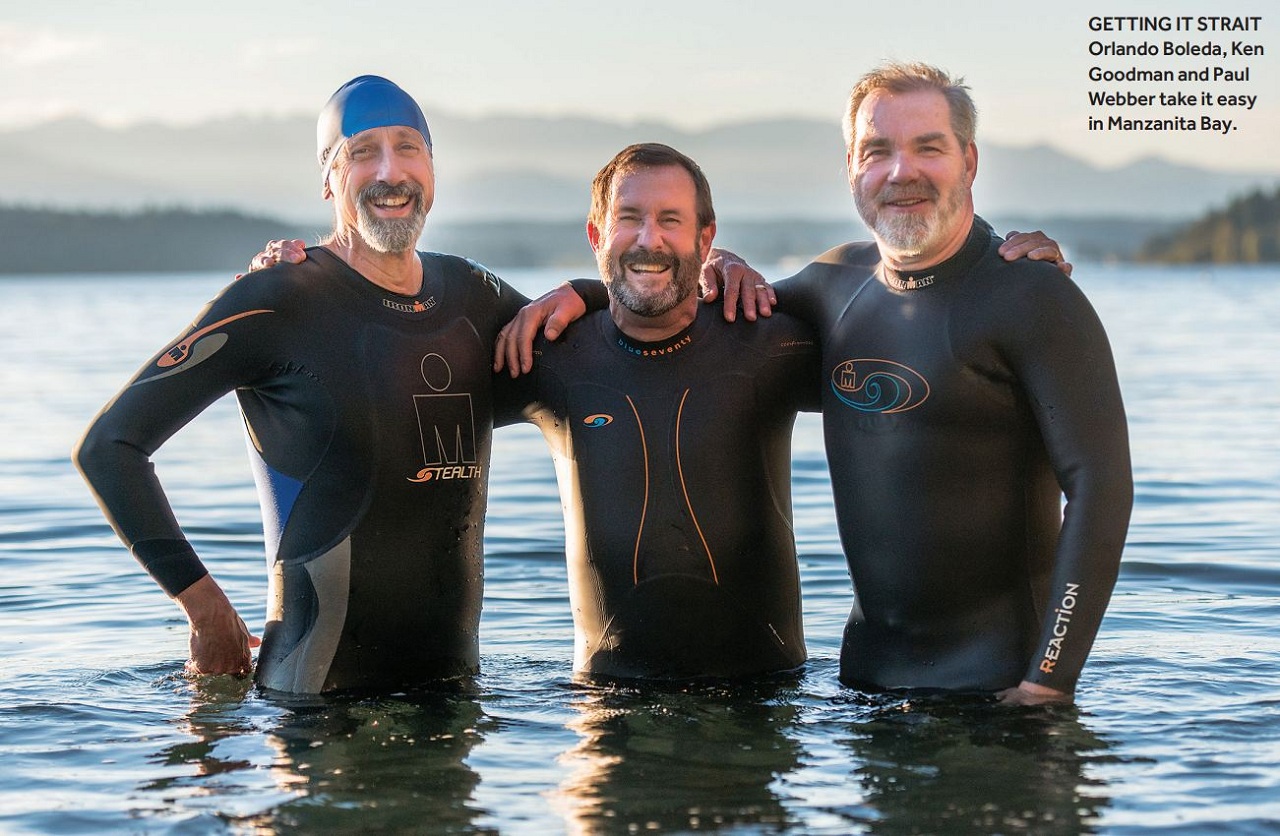 Splash Into Summer // Where to Get Wet