Connecting a ball and goal has always fascinated Bainbridge resident and retired basketball star Todd MacCulloch. Throughout his athletic life, which included a stint with the Philadelphia 76ers, the quietly competitive 7-foot MacCulloch is particularly adept at directing a ball where he wants it to go. Today—although the ball is smaller and made of steel—the same accuracy that made MacCulloch a great NBA center is driving his growing success as a competitive pinball player.

A native of Canada and graduate of the University of Washington, MacCulloch quickly excelled in pinball after going professional in 2007—traveling the domestic circuit, competing in the 2007 European Pinball Championships and twice playing in the International Flipper Pinball Association (IFPA) World Championships. He annually attends the Professional and Amateur Pinball Association’s World Pinball Championships, and in 2011, MacCulloch earned his first major title by winning Chicago’s Pinball Expo, defeating two reigning world champions.

“Todd got really good, really fast,” said Josh Sharpe, MacCulloch’s friend and president of the IFPA. “His work ethic and passion show in how quickly he advanced from rookie to the top ranks.” MacCulloch hopes to continue advancing, ranking high enough in the world’s top 100 to play in more local tournaments and to play in the IFPA World Championships every year. “Todd is easily the most well-known figure playing pinball at a high level, and his celebrity is great for the sport,” Sharpe said. Pinball is gaining recognition; in 2006, when the IFPA first ranked players, there were 500 listed worldwide; by 2014 that number had grown to 30,000 registered competitive pinball players in 42 countries.

MacCulloch’s infatuation with pinball began early. As a kid, he visited 7-Eleven for Slurpees and Pinbot, and played anywhere he could. Pinball provided downtime through high school and UW basketball season, and when training with Team Canada for the 2000 Olympics. In his third NBA season, MacCulloch bought his first machine. “Besides practices and games, I had extra time and money on my hands,” MacCulloch said. “[My wife] Jana and I purchased our first house, in New Jersey, and bought a pool table. I thought it would be pretty cool to add my favorite pinball games.”

As MacCulloch sought games to buy, he also met some of pinball’s best players—wizards like Sharpe, Rick Prince, five-time world champion Bowen Kerins and pinball designer Steve Ritchie—who mentored him and shared strategies. When his basketball career ended unexpectedly at age 27 in 2004 due to foot damage, pinball provided MacCulloch—also a Bainbridge Masters swimmer—an alternative outlet for competition. “Giving up basketball is by far the hardest thing I’ve had to do,” said MacCulloch, who last November was inducted into the Manitoba Sports Hall of Fame. “Having pinball and the pinball community definitely helped.”

While his NBA experience is a great asset for pinball—hand-eye coordination and fast reflexes, as well as patience and focus—MacCulloch admits he still struggles with nerves. His heart rate rises and he rushes things. “It surprises me how nervous I get playing pinball; I didn’t expect that.” Today, his “man cave” boasts a collection of almost 80 different pinball and arcade games, and in 2012, the MacCullochs hosted the IFPA World Championships, with 64 players from around the globe alighting on Bainbridge for a weekend of pinball. They also host local tournaments.

MacCulloch shares his passion by supplying pinball games to Walt’s Market in Lynwood Center, Soup’r Burger in the Pavilion, and Westside Pizza, splitting all proceeds 50/50 with the businesses. Walt Hannon, owner of Walt’s Market, sees all ages playing the two machines MacCulloch provided. His Frito-Lay and wine vendors typically play after a delivery, and kids will stop for a few rounds after school. “It’s a fun little hobby,” said Hannon, who remembers walking three miles as a kid on Bainbridge just to play pinball in the old bowling alley in Winslow.

Even gamers who trained their thumbs on the controller of a PlayStation3 are getting in on the pinball action. BHS freshman Andrew Zech likes playing Indiana Jones with his buddies at Westside on early dismissal days. “I like the sound effects of pinball, and that there is constant motion,” Zech said. MacCulloch agrees. “I’d always thought there was something wrong with me—because I wanted to play pinball so much,” he said. “But I realized there are a whole lot of us pinheads out there—pinball is just our thing!” 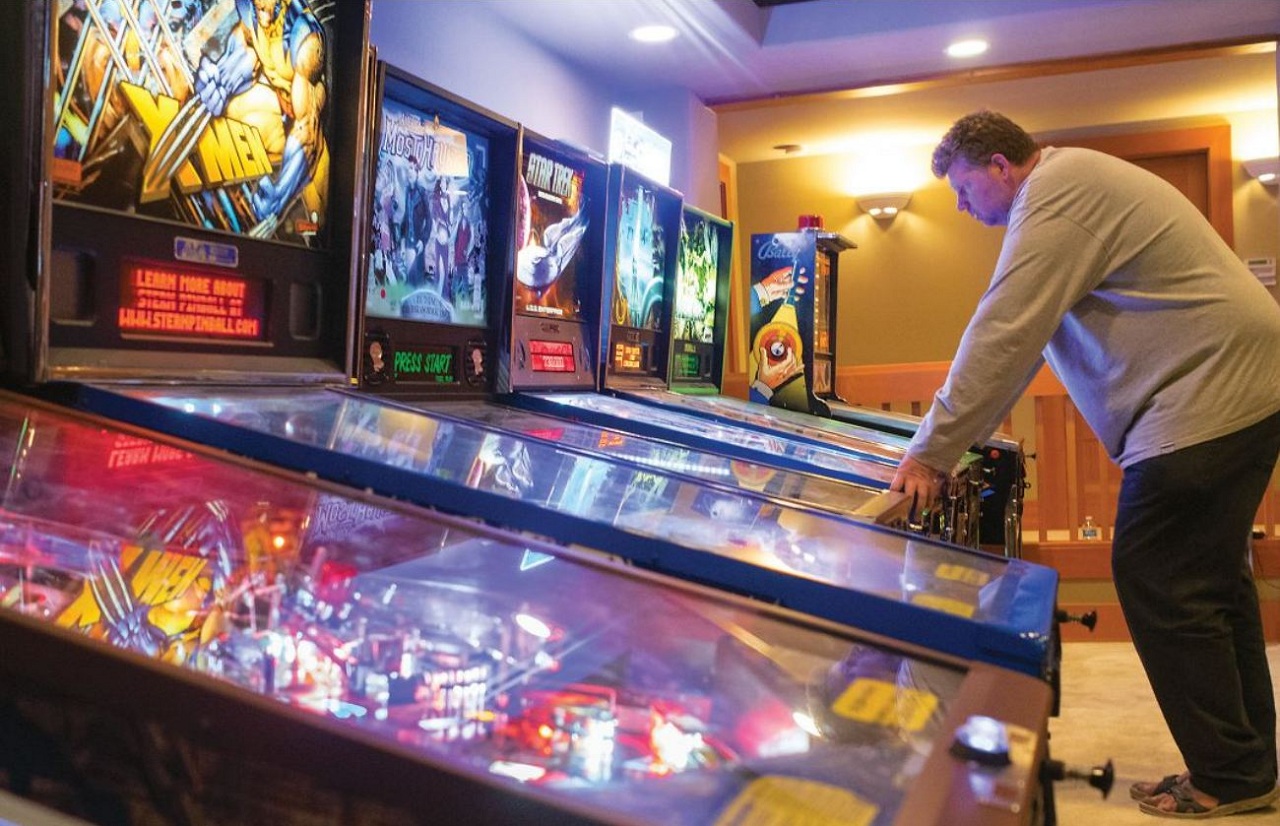