A few things have put Bainbridge Island on the national map. Our high-profile governor calls Bainbridge home. Its history inspired the bestselling novel Snow Falling on Cedars. And, increasingly, our island is known across the sporting world as the birthplace of pickleball—one of the fastest growing sports in the country with millions of players.

Yet until recently, pickleball and its legendary beginnings at a Pleasant Beach summer cottage in 1965 went largely overlooked. While the sport’s popularity skyrocketed over the past decade with clubs and tournaments multiplying from Washington to Florida, play on the island was largely limited to a smattering of backyard courts. That’s changing, however, thanks to a passionate group of local players and island historians. Their separate but coordinated efforts have serendipitously launched a pickleball revival of sorts on Bainbridge Island.

“This thing has kind of circled back to Bainbridge Island,” said Scott Stover, a former pickleball champion who now lives in the Pleasant Beach home where it all began. “I think it’s being rediscovered here.”

Stover and his wife Carol were among the pioneers of the game, which famously began on a lazy summer day with a gaggle of kids complaining of boredom. Joel Pritchard sent them out to his badminton court with a whiffle ball and ping pong paddles and told them to invent a game.

It didn’t take long for Pritchard, a charismatic congressman, and his neighborhood buddies to take over the court and start a friendly competition that continued summer after Bainbridge summer. Rules were invented and tweaked. Rackets were crafted and refined in neighbor Barney McCallum’s basement. Legend has it, Pritchard’s dog Pickles inspired the sport’s whimsical name. An amalgam of tennis, table tennis and badminton, pickleball eventually crossed the sound to Seattle and beyond in the 1970s and 80s, championed by the late Pritchard, McCallum and friend Bill Bell.

“People think it’s a new sport,” said David McCallum, Barney’s son and the first employee of Pickle-ball Inc, his dad’s equipment company. “It just had a very slow growth curve for about 30 years.”

The sport has exploded over the last decade, proving especially popular among retirees with its emphasis on precision over power. The number of pickleball players has topped 3.3 million players, growing about 10 percent annually, according to the Sports and Fitness Industry Association. That makes it one of the nation’s fastest growing sports complete with a national tournament in Indian Wells, California, that draws thousands of people—not to mention countless smaller tournaments across the country, a roster of sponsored pros and a planned 3,500-seat stadium in Naples, Florida. “It’s unbelievable,” said Stover. “Not what we ever imagined.”

And it’s now coming full circle with renewed local interest in the game and the construction of six new pickleball courts at Battle Point Park. The $350,000 project, which broke ground last fall, is being privately funded by Bainbridge Island Pickleball, a group of more than 200 players that meet regularly in the summer at the Battle Point tennis courts. Tennis courts convert easily to pickleball courts, but dual use can create friction with tennis players. Since getting the green light from Bainbridge Island Parks and Recreation last year, the group has raised more than $75,000 for the project.

The group’s not stopping there. It’s working with Bainbridge Island Parks Foundation to raise an additional $50,000 for an adjacent Founders Courts commons honoring Pritchard, Bell and McCallum. Bricks can be purchased from the foundation for $150 a piece. The group is already well over halfway to its fundraising goal and hopes every pickleball club in North America will buy a brick.

“How many games start in a backyard and turn into a sport with over three million players?” said Clay Roberts, who co-leads Bainbridge Island Pickleball. “It speaks to the quality and ingenuity of the folks on Bainbridge.”

Just as the Founders Courts project got underway, local pickleball got another big boost. Bainbridge Island Historical Museum launched an annual Founders Tournament last August at Bainbridge High School that attracted more than 250 players from across the U.S. and Canada. Barney McCallum, who has since passed away, signed paddles and regaled fans with pickleball lore alongside Frank Pritchard and Bill Bell Jr., sons of his fellow founders.

Museum director Brianna Kosowitz calls McCallum a legend and says his participation was a perfect bookend to his long and storied pickleball career. Kosowitz, a former tennis player, has become hooked on pickleball herself since moving to Bainbridge two years ago. She enjoys how inclusive the sport is, quickly embracing all ages and athletic abilities. “It’s a total blast.” 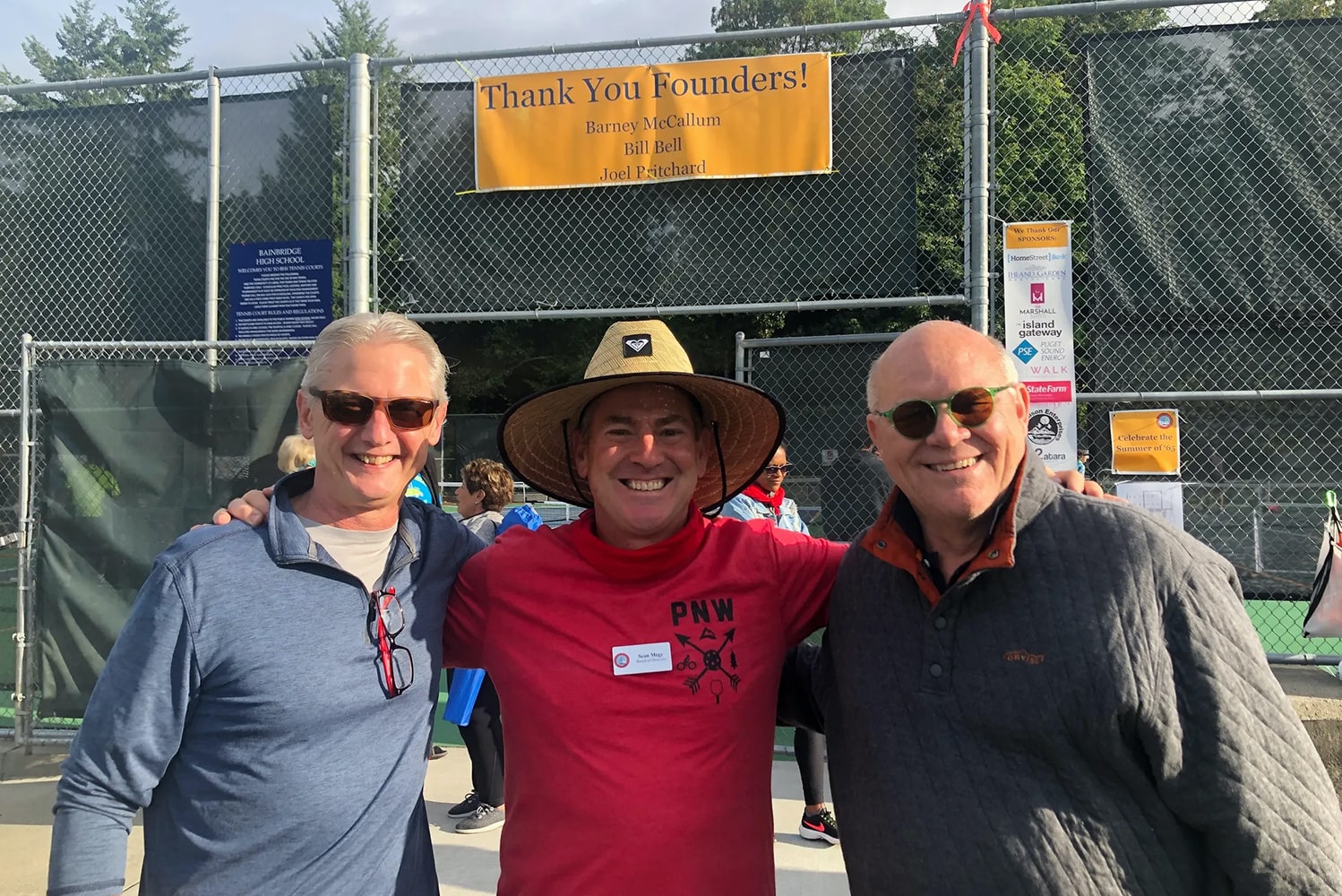 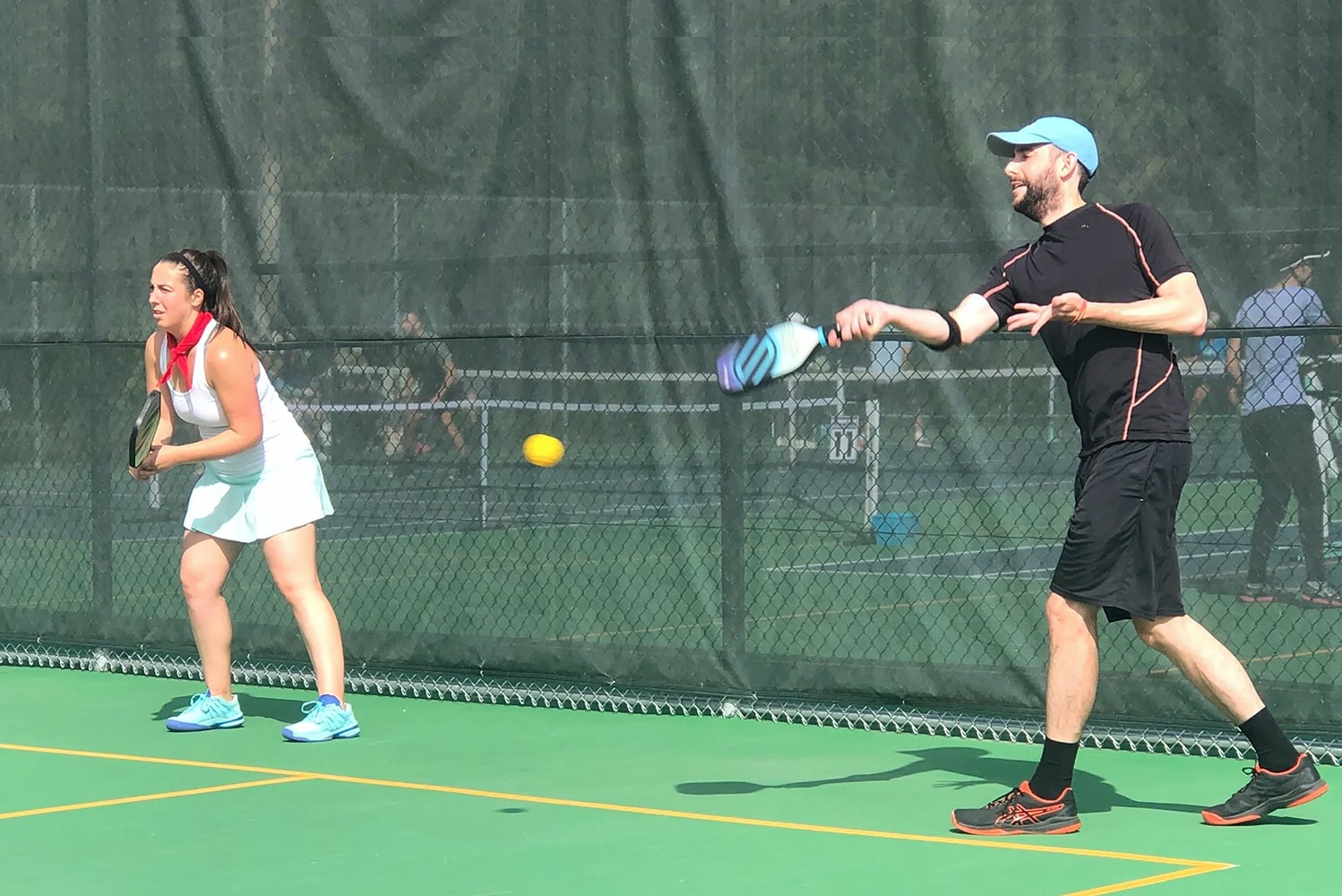 Participants in the BI Founders Tournament in August 2019.

How Did Pickle-Ball Get Started?