The balls drop into the hopper, signaling the start of a game. The crowd’s attention turns to the man at the microphone. “O-74.” Heads bend over as players search their cards, the silence broken by a Dean Martin tune coming from the radio. “Don’t forget to get your spaghetti,” says the caller. “Get it while it’s hot.” “I-25.” “G-58.”

This rhythm continues for a few minutes until someone yells, “Bingo!” Good-natured groans erupt. From across the room, someone laughs and says, “How’d you get bingo so quickly?” This scene has played out at the American Legion Hall on Bucklin Hill Road since 1951. Stepping into the hall is like going back in time—back when entertainment didn’t involve touch screens or virtual friends. Back when games were truly interactive and you’d sit face to face with your opponent and chitchat between rounds.

Louise Kelly should know. For as long as bingo has played at the Legion, she has been in attendance. “Back then we used dried navy beans as place markers,” Kelly said. “Now we use daubers.” Other than that small detail, not much has changed. (For the novices, daubers are paint-filled markers players use to cover the bingo squares.)

Week after week, players try their luck at winning. Payouts run from a few dollars to a few hundred. But it’s not all about the money. What brings folks back each week is the camaraderie and the friendly banter. “People here are so down to earth,” said Cindy McCarthy. “This has become my Wednesday family.” McCarthy recently moved to Bainbridge and found the games a perfect place to meet new friends.

The cost is minimal—$10 buys you a game packet for the night. Throw in a homecooked meal for $6, and you’ve made it a complete evening. The games begin at 6:30 p.m. and usually wind down around 9:30 p.m.—rather late for Bainbridge. Each session includes 26 variations of bingo. The ever-changing games may seem confusing at first, but these folks are friendly and welcome beginners.

First-timer Roberta Post chose to play bingo for her birthday celebration. She had driven by the sign outside the hall for years, and finally got around to playing. After one round, she was hooked. “I can’t believe this has been going on for the 12 years I’ve lived here, and I’ve never gone,” she said.

Before the casino opened across the bridge, bingo on Bucklin Hill averaged 90 people each week. Now the group hovers around 25. Proceeds from the games go toward the Legion’s operating costs and ongoing support for veterans. Organizing the weekly games is no easy task. Volunteer manager Rena Beyke puts in long hours making sure the games run smoothly. Wednesday nights you can find her running around the hall, taking care of the details.

It’s the crowd’s enthusiasm that fuels Beyke. For some patrons, Wednesday’s bingo night is their primary outing for the week. For others, it’s an opportunity to socialize that they might not otherwise have. “This is why I do it,” Beyke said, gesturing across the hall. “It’s all for them.” Bingo! 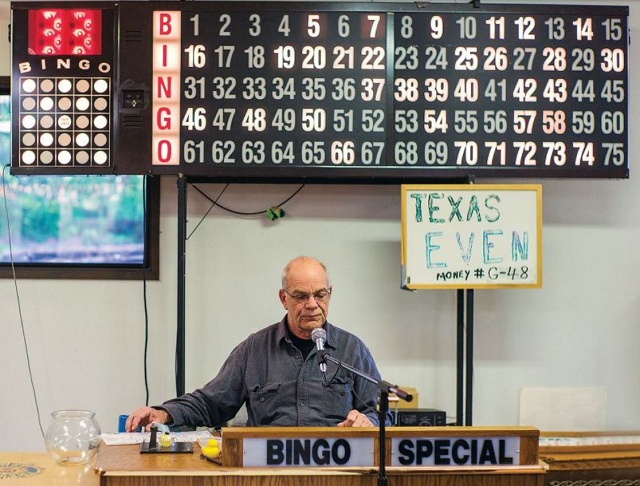