Before the Kingdome or Safeco Field beckoned fans to cross the sound, America’s pastime figured prominently in Bainbridge’s social life. For more than 45 years, slow-pitch softball has provided an all-comer outlet for the island’s fun-loving and active adults. Although the island’s baseball and softball programs—including Japanese, Filipino, Indopino, Native American, women’s, men’s, co-ed, youth and senior leagues—have waxed and waned over the years, they’ve never ceased to create generational camaraderie, competition and memories that continue to reach far beyond the baseball diamond.

Officially established as a recreational program circa 1972 through the Bainbridge Island Metro Park & Recreation District (BIMPRD), Bainbridge’s adult softball league separated into the Bainbridge Island Softball Association (BISA) in 1974, sporting 28 men’s and women’s teams with players from all over Kitsap County. “Slow-pitch softball is such a great program because anyone can find a team and play,” said Glenn Hagen, long-time player and coach and BISA’s first president. “You don’t need to be athletic or a jock—everyone can have fun, and the rules of slowpitch are designed to keep people from getting hurt.”

A combination of traditional slow-pitch regulations and senior rules, along with uniquely creative ones, help keep the game fun and everyone safe. “Dwayne’s rule,” for example, allows someone with limited mobility to still bat, while a pinch runner starts from the fence at home plate to run the bases. Another rule allows a force out at home which prevents collisions at the plate. Local inspiration “Uncle” Daniel Rapada—who started at age 16 and is still going strong at 74—makes good use of these rules both as a batter and a pitcher. Although no longer running bases, he throws a wicked curve ball while wearing a catcher’s mask and practices daily to perfect his underhand knuckleball.

“Not only is it fun, softball is a great way to teach kids good morals, consideration and respect for their elders,” said Rapada, who plays in three different leagues and whose three sons and two daughters also played. His current team, Crown Royal, is made up mostly of players from the Suquamish, Lil Boston and Filipino communities and is team to many of his grandchildren and greatnephews. While BISA thrived through the 1990s, numbers tapered and the co-ed and women’s divisions lost momentum. BIMPRD eventually took back the organizational reins in the early 2000s. Annual participation fluctuates, but the league has had a resurgence of late. 2017 saw eight men’s teams—with 15 to 20 players each, ranging in age from 18 to the mid-70s—stirring up dust a Battle Point on Monday and Wednesday evenings through June and July, culminating with a round-robin tournament in early August.

Games double as social gatherings—a chance to connect with friends and family, enjoy summer and continue last year’s rivalries. For many, the relationships extend to the off-season with poker games, crabbing expeditions and get-togethers that keep teammates connected. “For lack of a better word, I like the fraternity of it,” says Ken Fox, whose team B.O.F. went beyond softball a few years ago when they raised over $1,700 toward cancer treatment expenses for the coach of an opposing team. According to Michelle Byron, whose husband Julian put together B.O.F. in 2009, their two kids don’t consider it summer until they’ve been to at least one of their father’s games.

Kay DuPont, a 35-year league veteran, remembers watching her father play. Likewise, her own children grew up watching softball too. “That’s just where you spent your summer evenings—you came to the park and ran around,” said DuPont, who plays on R Gang and is one of three remaining women in the league. While the league is truly recreational, some play more intensely than others. Rapada’s team, Crown Royal, traditionally takes home the annual trophy, with team Slainte gunning for them year after year. According to Dave Allen, who has played and coached from the start, manages the team R Gang, and works part-time with BIMPRD to help maintain the fields, most players are there simply to have fun and see old friends. “It’s not that we don’t want to win—we do,” he said, “but if we lose, the sun will still come up. The softball season is something I look forward to every summer.” 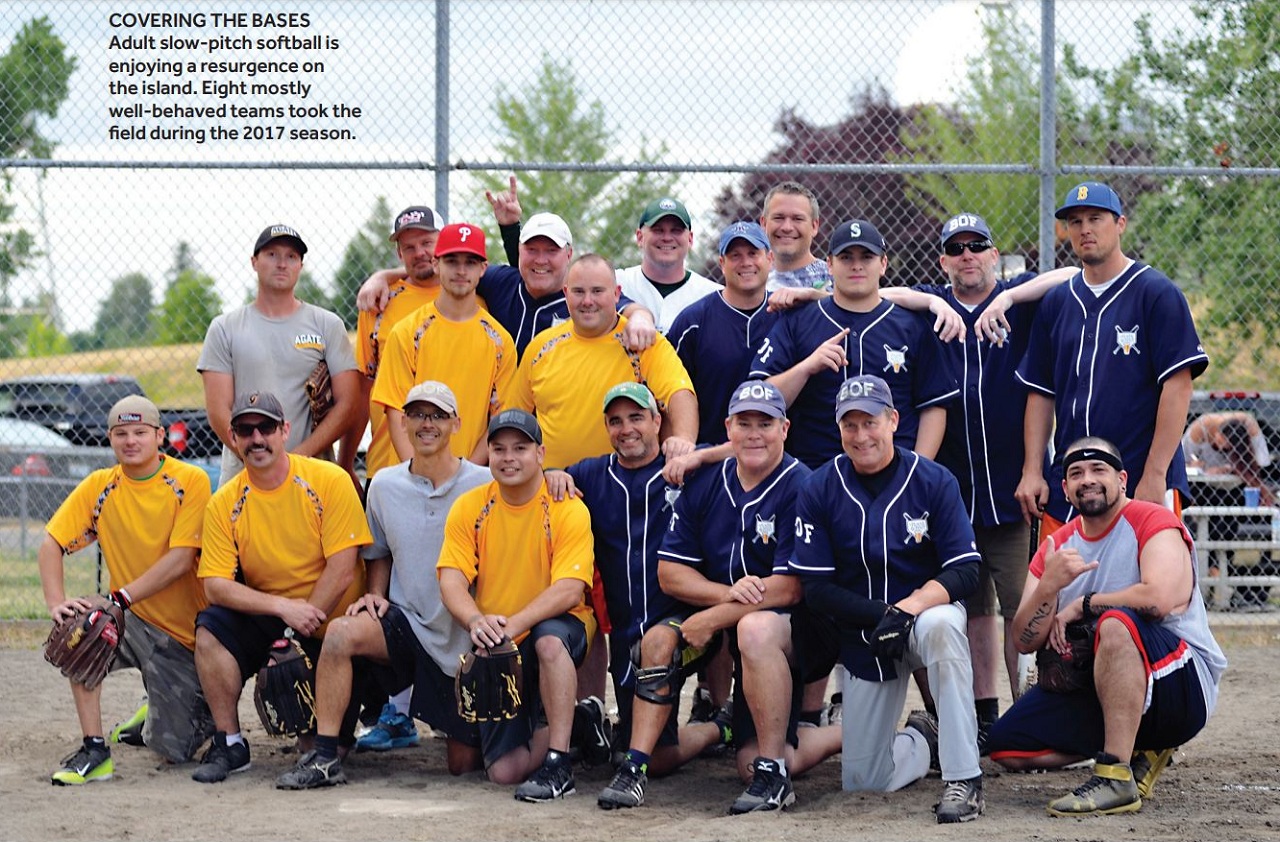