It’s Fitting that Bainbridge Islanders—surrounded by the sea—love their water sports. Stop by the Bainbridge Aquatic Center and you’ll see a pool constantly in use. Swim, dive and water aerobics classes are full, Bainbridge Island Swim Club is capped, and Bainbridge Aquatic Masters has more than 120 members. But none are experiencing a renewal like water polo. This season, 49 kids, ages 7 to 14, are registered in water polo instructional classes, compared to an average of 17 in 2011.

Separately, Bainbridge Water Polo Club has 10 kids, ages 5 to 8, in Splashball, a USA Water Polo-affiliated early instruction program, with another 12 playing BWPC youth polo. In addition, the high school water polo teams boast approximately 30 players. Originally called water rugby or aquatic football, water polo originated in Great Britain in the late 19th century as a showcase of brute strength and wrestling and swimming skill, and really, not much has changed. Similar to that of soccer, the objective is to move the ball down the pool, score in the opposing team’s goal, and prevent the other team from doing so.

All this happens in water, requiring constant movement; a player might sprint as much as one mile during four periods of play. The sport isn’t new to Bainbridge. In 1986, Steve Killpack, a youth counselor, started a boys—and later, a girls—high school team and soon Bainbridge became a powerhouse. BHS girls won state eight years in a row, from 1991 to 1998, and again in 2004. The boys won in 1995 and 1996, and frequently placed in the top seven under Killpack. Over the years, however, for many reasons, including Killpack’s retirement in 2003, participation in polo waned.

“Water polo lacks the familiarity of more traditional sports, so it’s harder to get players,” said BWPC and BHS boys head coach Jacob Millican, a BHS and University of Massachusetts water polo alum. “But the sport speaks for itself—swimming, having a ball and scoring goals make for a pretty interesting game. Thanks to a core of strong coaches, players and parents, the popularity of water polo on Bainbridge is starting to come back.” Besides Millican, the club includes BHS girls head coach and JV boys coach Drew Keller, and BHS JV girls and BWPC youth coach Cooper Rooks, both BHS alumni. Volunteer coaches Jody Howard and alumnus Riley Deering also help, as does J.P. McCann, an instructor with the Bainbridge Island Metro Park and Recreation District.

“Middle school can be rough, so a positive outlet where you can be a little aggressive is good,” said Rooks, who ensures practices are safe and welcoming. “Our program works well because we work with kids, not to make them Olympic athletes but to make them better people. Hopefully, they have fun and discover something they’re passionate about in the process.” Among those who play and coach water polo, there is a particular bond, perhaps rooted in the toughness of a sport that by necessity puts team above individuals.

Another appeal of water polo is how the game bridges age groups and genders—high school players help coach Splashball and BIMPRD classes, boys and girls play mixed during club season, and players frequently attend Masters swim workouts. “Water polo has a certain culture and is accepting of many different personalities,” said Keller, who competed in soccer, swimming and water polo for BHS. “There is a family-like connectedness from the youngest up through masters-level players.”

Spanish exchange student Alejandro de Santiago experienced this camaraderie last year at BHS. “My year would have been totally different without water polo,” said Santiago, who played both BHS and club. “We were like a family, and being on the team helped me not feel alone. It was an experience that I loved.” Kristin Gellert, a BHS alum who as BWPC head coach from 2010 to 2013 was instrumental in reinvigorating Bainbridge water polo, is excited about the sport’s future.

“Bainbridge was the team to beat for many years,” said Gelllert, who played Division 1 at the University of Hawaii, and now coaches Puget Sound Water Polo Club in Tacoma. “I believe it can get back to that.” 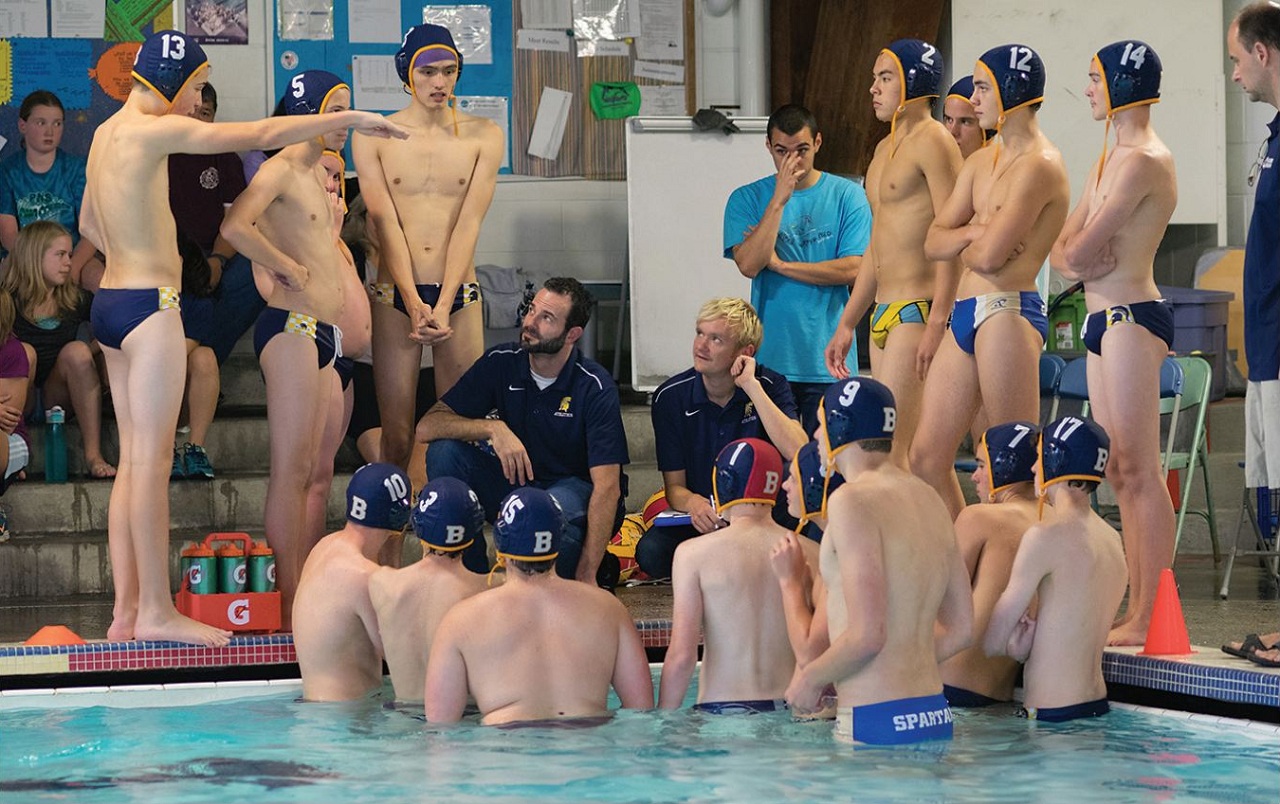 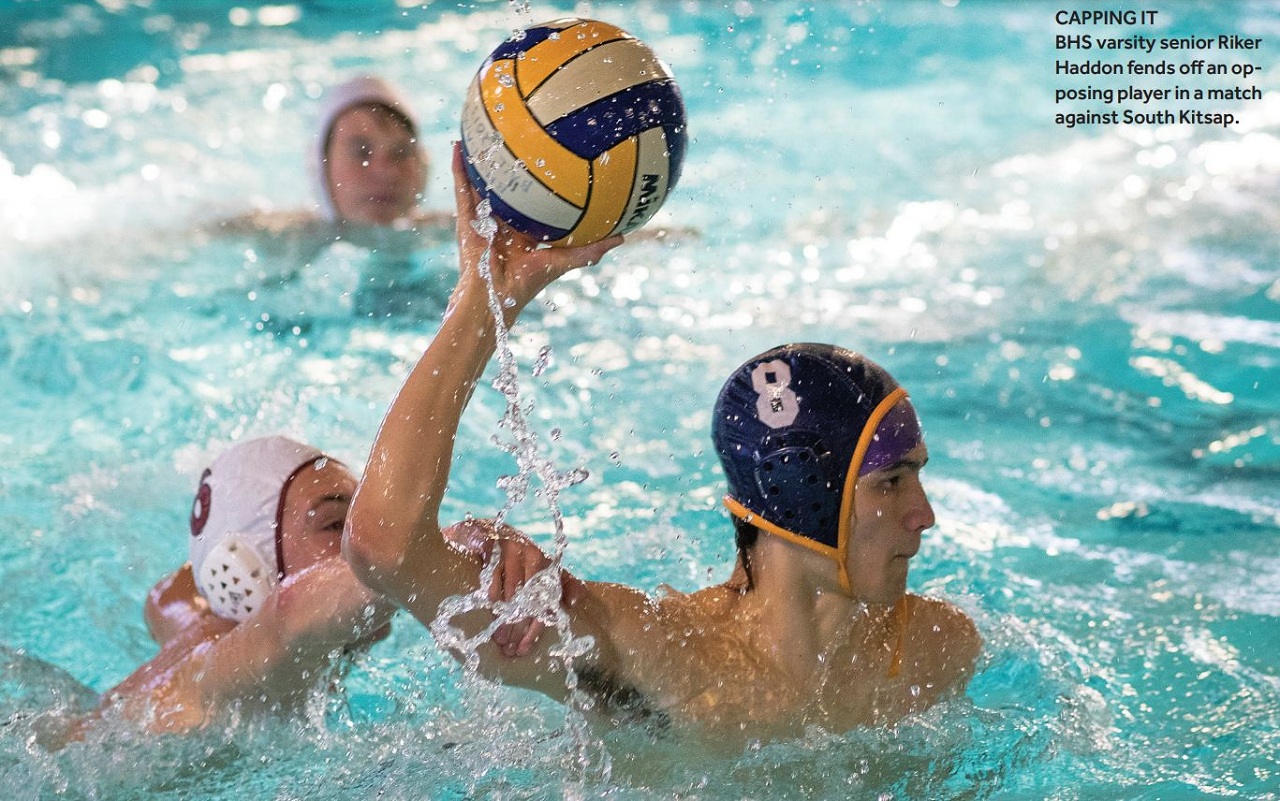