Carolyn Leech recently marked her 20th anniversary as postmaster at the Rollingbay Post Office, a post (pun intended) that dates back to 1892. Things are done a little differently at Rollingbay, from the spelling of the name (one word, not two), to the zip code of the P.O. boxes (98061), to the smiles and casual conversation meted out along with stamps from the window of the cozy 480-square-foot space in the Bay Hay & Feed building.

What services are offered at your office?

I have 368 post office boxes and deliver to them six days a week. I’m a full retail window, so I do everything at the window that Bainbridge does. My office also has a great selection of commemorative stamps, one of the best, if not the best, in Kitsap County.

I sing with the Bainbridge Chorale. I’ve been there for almost nine years. I love movies, so I also work at the Bainbridge Cinema because all my movies are free. I work Friday and Saturday nights at the cinema. I get to see a lot of movies.

Any thoughts about retirement?

In the back of my mind, but I just like working. I’m not a homebody. I like to come to work. This is my community. This is what makes me happy. I love my job, I love my customers and I’m honored to be their postmaster.

How did you get started with the post office?

I moved up from California. I was visiting a friend who had moved here and fell in love with it. While I was looking for a job, I took the postal exam. I started in Bremerton, then got my first office at Lilliwaup on the Hood Canal. I was there for 11 years. Something came up about Rollingbay being open and I thought, “Well, where’s Rollingbay?” I called them up and learned it was on Bainbridge. I wanted a nice small office and it was perfect for me. It just fit.

Rollingbay and Winslow are the last of 11 post offices that have served Bainbridge over the years. What do you think is special about the Rollingbay location?

When you’re in a smaller office, you have a closer relationship with your customers. You have a little more time to talk to people and to get to know them. It’s kind of nice to have that feeling of community, when people come in and they see neighbors that they haven’t seen for a while. It’s just a different atmosphere when you come in here.

With the closings of so many small post offices around the country, what do you see as the future of the Rollingbay office?

We recently signed a new five-year lease [with Bay Hay & Feed owner Howard Block] which runs through 2022. Howard is a great landlord. He’s very community oriented. So, we’re not going anywhere. Customers keep asking, “Are you closing?” I tell them, “No, no, I think we’ll be okay.”

Is that the most common question people ask you?

It is, and then, “What time does the mail go out?” 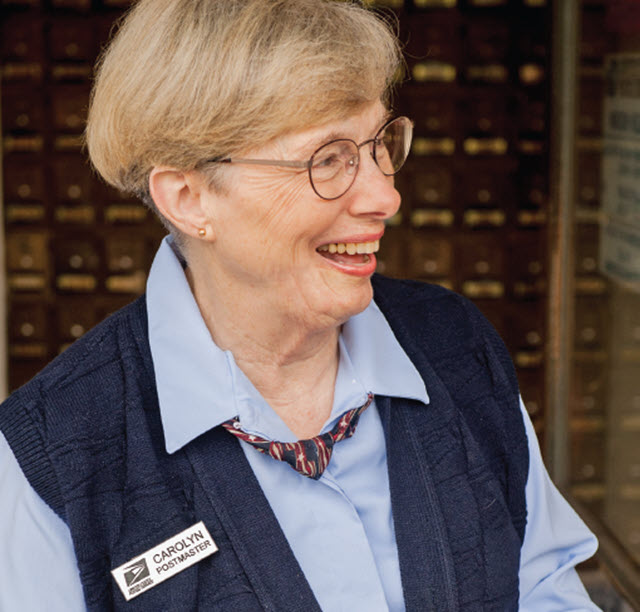