While shuttling between her home in Suquamish and her jobs in downtown Winslow and Poulsbo, Debi Schneider measures her commute not in minutes spent on 305, but in numbers of songs she’s heard. “A longer commute means more of my favorite songs from the ’70s,” she laughed.

To Schneider, who grew up on Bainbridge Island and is a manager at the Blue Heron Jewelry Company in Poulsbo, life in this corner of Kitsap County is like “living in a picture postcard.” She spoke about the obvious maritime influences, but appreciates its more intimate details too. “It is still possible to know the names of people on the streets and in the shop, and also the names of each person’s dogs.”

In a fast-growing region, Schneider believes that staying in touch with neighbors and friends is paramount. “We’re all moving much more quickly. If we don’t all talk to each other, we don’t know what the commonalities are. Once we learn something about each other, there’s an individual thread drawing us together, and there’s a joyfulness to having the threads that support us.”

One of those common threads, she said, is that “people here are all about custom work. They want something different, something extraordinary. There is a mindset about keeping things out of landfills and buying forever pieces. People here are about value-driven purchases, and that means value for the long term.” Blue Heron fulfills such requests by representing many jewelry artisans from around the country.

Are Poulsbo and Bainbridge Island becoming more alike? Schneider believes the two towns share many similarities. “Whatever small town you choose to live in, we all share the values of community, mixed with epic places to shop and the best food stores anywhere.”

Schneider said Blue Heron’s values, fostered by owner Leo Fried, are the reason why customers come from as far away as Port Ludlow and Gig Harbor. Integrity and transparency are prized, as are training, service to multiple generations of customers, and highly specialized artisanal pieces in the showcases. Giving back to the community is also emphasized. “We adopt a family and have a giving tree at Christmas,” said Schneider. “People come into the shop specifically to give and we run out of tags!”

Liz Le Dorze, owner of Hattie Rose in downtown Bainbridge as well as the Sugar Flower Market in Historic Downtown Poulsbo, echoed the sentiment. Dorze noted that both areas are beautiful small towns with unique shopping and individual characters. “We are so lucky to have shops in both towns!” she said.

Dave Lambert, owner of the Slippery Pig Brewery in Poulsbo, is a fifth generation Kitsap County resident. He notices that Bainbridge and Poulsbo are becoming more blended as the growing population flows back and forth. He said that Suquamish “is growing and changing exponentially.” Suquamish is definitely “part of the flow of customers at the brewery,” he said.

Fernando Pinto, manager at the new outpost of Isla Bonita in Poulsbo, said that his family leapt at the opportunity for a second location. “This makes it easier for our workers and our customers on both sides of the divide,” he said. “Now, we are giving people a choice.” Sergio Alonzo, owner of Next Day Dry Cleaners in Poulsbo, agreed. “Fifty percent of our customers come from Bainbridge,” he said. “We are actively looking for ways to better serve them.”

Poulsbo Running store owner Chris Hammett said that Poulsbo is “a really good central location for us so that we can service the whole area.” At least 20 percent of his business is from the island, including Bainbridge High School cross-country runners, and the store draws customers from all over the Olympic Peninsula. Hammett noted that the new foot ferries from Kingston are also contributing to rapid growth, which causes more traffic circulation and flow.

Blue Heron’s Schneider said that although the “picture postcard” has greatly changed over the years, its essence has not. She recalled an old bumper sticker that encapsulates people’s love for this region. “We’re all here because we’re not all there!” 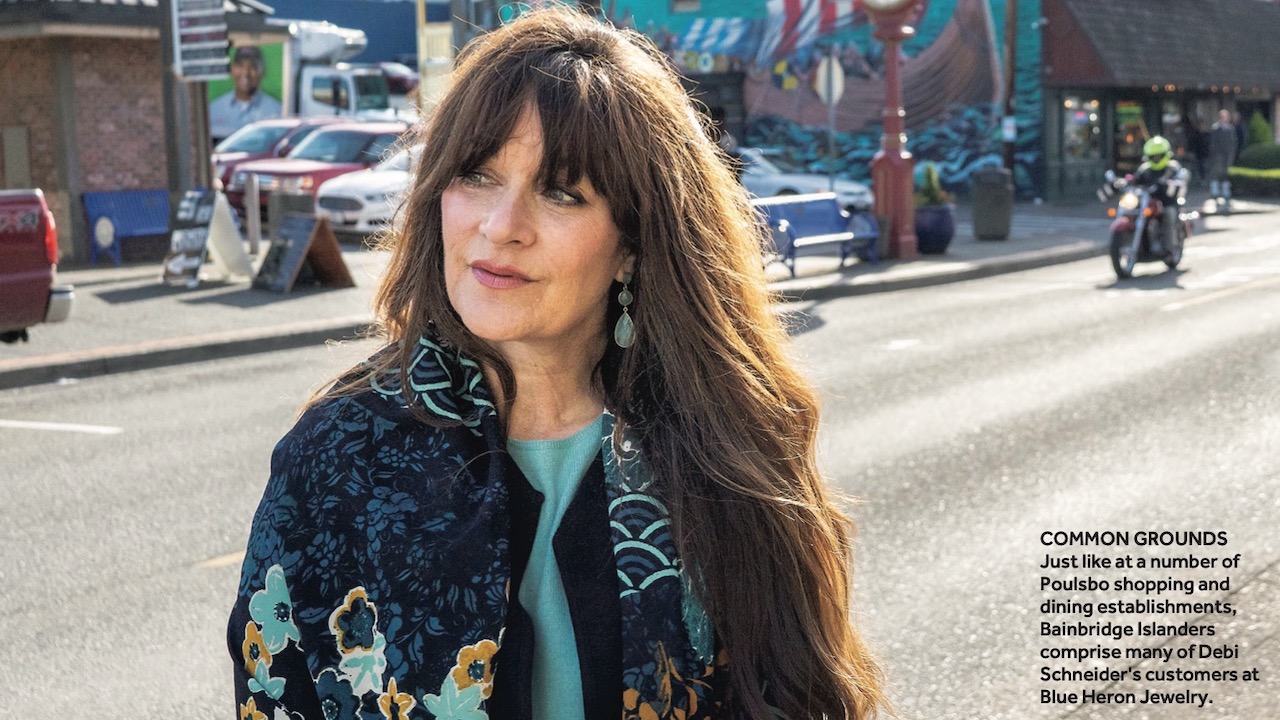 Innovation Takes Flight // Off the Grid Meets off the Hook