For Leigh Calvez, it was love at first spout. She met her first whale, a humpback, in 1992 on a whale-watching voyage off the Massachusetts coast. When the animal exhaled, mist rained down and Calvez felt peace. She wanted more. For nearly three decades since, whales have been her passion. In her new book, “The Breath of a Whale: The Science and Spirit of Pacific Ocean Giants,” she shares her encounters with some of the world’s largest, most mysterious creatures.

“Their energy is so big,” she said. “They show compassion and kindness in ways not many other creatures do.” Over the years, she worked as a research scientist, naturalist and writer. Her book, released February 26, details her interactions with and observations about humpback, blue, false killer, Blainville’s beaked and gray whales, as well as orcas. Calvez, who has written for Bainbridge Island magazine, also authored a New York Times bestseller, “The Hidden Lives of Owls: The Science and Spirit of Nature’s Most Elusive Birds,” released in 2016. For that book, she researched her subject, then plunged into the deep, dark woods to study owls. One key to the owl book’s success is people’s fascination with “creatures that have played a part in mythology, culture and art for centuries,” said Molly Woolbright, publicist for Sasquatch Books, which published both of Calvez’s books.

“As a scientist and naturalist with experience working in research and conservation, Leigh brought a highly informed perspective to the book, but like many of her readers, she was new to owling,” Woolbright said. “The genuine wonder at her discoveries came through in her expressive writing style. What could have been an impersonal scientific study, in Leigh’s hands became a fascinating, sometimes humorous, and deeply human book.” Compared with owls, whales live in an even more remote and challenging environment, Calvez said. “We (humans) can’t spend much time in water. And even if you could, you just don’t see whales that often. The ocean is big and dark and wet.”

What her quest revealed was often astonishing and humbling, sometimes sad, sometimes hopeful. For example, although people once hunted gray whales nearly to extinction, today “they bring their calves up to us,” Calvez said. Her writing and work were on hold for a while as she battled toxic shock syndrome from a strep infection in 2004. Ugliness and uncertainty in the world brought her down, she contends. “I became fixated on the bad things, like environmental degradation. I took all that into my body, and I got sick.”

The whales helped bring her back. For example, after being on a respirator for weeks, Calvez had to relearn how to breathe on her own. Friends had hung a whale mobile above her bed, and she imagined swimming with those creatures, consciously breathing in and out as whales do. “On an emotional, spiritual level, I needed whales to remind me to follow my heart,” Calvez said. She refocused on what’s right with the world. “It’s a small shift in perception but a huge leap. gave me hope and helps me keep going.”

Don’t ask which type of whale is her favorite. “They all have their own mysteries and messages,” she noted. A blue whale’s size—it’s the world’s largest known animal ever—inspires awe. “Humpbacks are the most gregarious, full of energy, most curious. They play with things. Orcas play too, and they’re probably the smartest.” Like many people in the Puget Sound area, Calvez hopes a miracle can yet save the resident orcas. Boat-motor noises interrupt their feeding, food supplies are dwindling, toxins in the water compromise their health, many orca calves don’t survive.

But the orcas don’t spend as much time in Puget Sound as they once did, she noted. If they somehow decide to live more of their lives along the Pacific Coast, where food is more plentiful, that might save them, she said. Calvez is scheduled to visit Eagle Harbor Book Company on March 7. Calvez doesn’t know what readers’ reactions to the book will be, but she’s already contemplating her next one. “I would love to do something four-legged, probably some kind of predator,” Calvez said. “I’ll have to do more research.” 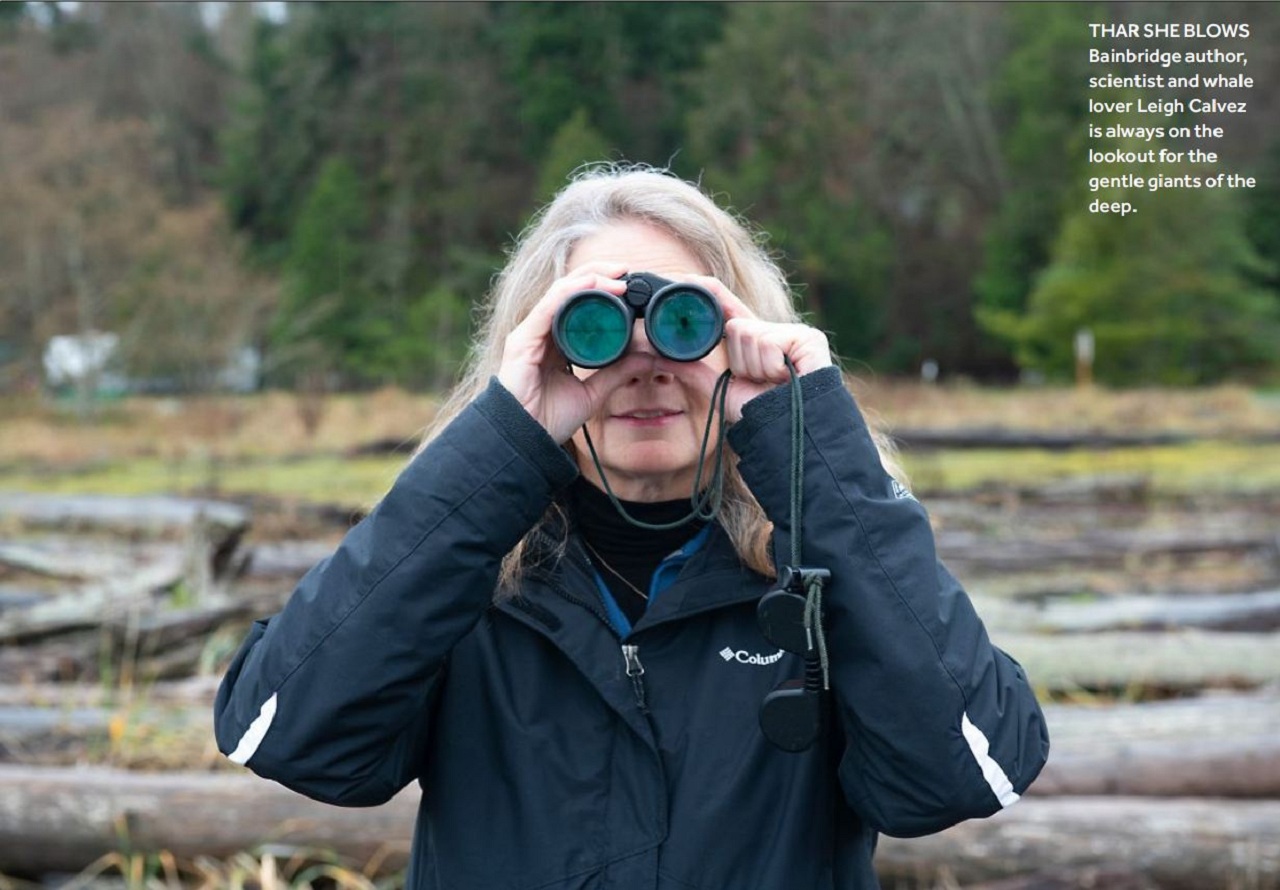