“Whoo-Whoo who cooks the foood?” asks a distant owl. “Barred owl,” whispers owler Jamie Acker as she leads a group, along with fellow birder George Gerdts, on an “Owl Prowl”—an owling expedition offered by the Bainbridge Island Metro Park and Recreation District. Ten intrepid islanders stand in the middle of Country Club Road in the dead of night, listening to the caterwauling calls of the barred owl, one of the species they hope to encounter, along with northern saw-whet, barn and great horned owls.

Much of owling is sound. Owlers often mimic owl calls to entice curious flybys. To see an owl, even a barred owl, probably the most frequently heard and seen owl on Bainbridge, is a stirring experience. People speak of owl encounters with great excitement. Seeing an owl in the wild is a rare privilege indeed. Sighting a barred owl on Bainbridge was next to impossible until 1992, when the first barreds arrived on the island, having spread west across the country through new forests that flourished after the Great Plains were settled.

The barred owl, named for the characteristic brown bars down its white front, is considered an invasive species by some. Known for fiercely defending territories and young even from humans, they out-compete other owls and may have contributed to the disappearance of western screech and pygmy owls on Bainbridge. To others, they are simply fascinating owls to watch. As the group listens, Acker begins whistling, “Toohtooh-tooh-tooh-tooh,” the rapid, two-beats-per-second whistle of the male saw-whet owl advertising for a mate. Hoping for a sighting, the participants stand silent and still. Rustling coats can mask quiet owl sounds.

Because owls are highly adapted to live while most of us sleep, it takes some determination to watch owls at night. Owls have large, tubular eyes, power-packed with nerve cells called rods, making night vision possible. Feathered, facial disks are satellite dishes, capturing minute sounds on the forest floor. Asymmetrically placed ears funnel sounds from the dish, pinpointing prey vertically and horizontally. Flight feathers with comb-like serrations reduce turbulence, allowing for silent flight. “I marvel at their adaptations that allow them to do what they do,” said Acker, who studies saw-whet and barred owls on Bainbridge.

Suddenly, a dark shape with wings silhouetted against the night sky shoots across a gap in the trees. Everyone turns, following the little saw-whet owl that lands almost silently in a tall Douglas fir. They search the trees for the small owl with the white-feathered “V” from bill to brows and white spots decorating its rust-colored wings. Measuring 6 to 8 inches head to tail and weighing less than a roll of pennies, these little owls catch and consume mice, voles, insects and occasionally small birds, some heavier than they are. Whether this saw-whet has recently arrived from a summer range or has nested on Bainbridge, it seems curious about Acker’s call before disappearing into the branches.

Some traveling is involved in owling and the Owl Prowl group drives to the edge of an open field frequented by hunting barn owls. The light grasses brighten the field as the owlers scan for movement and Gerdts plays the barn owl’s haunting scream-like call. They look for the white, heart-shaped face of the barn owl, a characteristic distinctly different enough from the face of other owls that it places barn owls in their own taxonomic family. Barn owls, the farmer’s friend, can consume 1,000 rats per year. But eating one poisoned rodent is fatal. On this night, no barn owls hunt here. “I love knowing they’re my neighbors,” said Sharon Negri, participant on the Owl Prowl. “So I got up early to be in the owl’s world.”

The last stop is the roost of a great horned owl, named for their tall ear tufts that are neither horns nor ears. Ear tufts are feathers that convey owl moods. Relaxed tufts mean relaxed owls. Provoked owls show erect tufts. Bainbridge Island has at least two nesting pairs of great horned owls. Like many owls, great horned owls do not build their own nests but often co-opt nests abandoned by other birds like ravens or hawks. “Whoo-who. Who.who who. Whoo.who,” a great horned owl hoots in the distance. Again the group stands in silence, listening to the owl’s call. 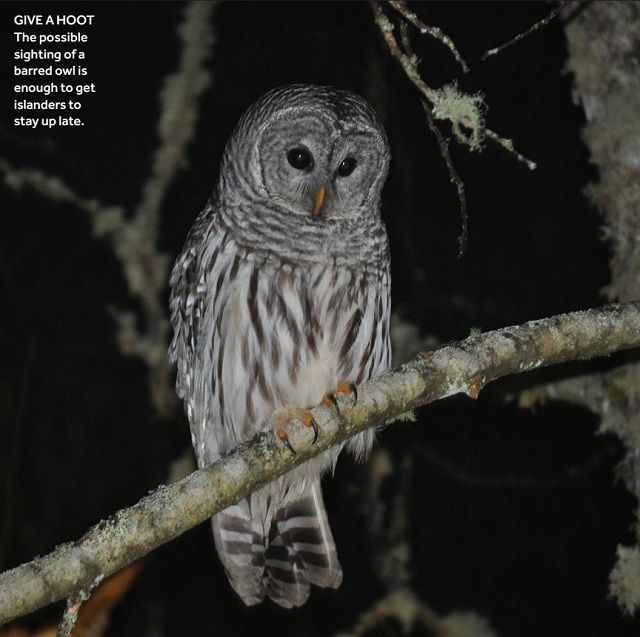