Ask Bainbridge Islanders what they love about living here and you’ll often hear, “The water.” No surprise. The waterways of the Pacific Northwest are magical, whether sparkling with sunlight or churning with white caps. It’s commonplace to see kayakers off Fort Ward Park, sailors cruising through Port Madison or beachcombers strolling Lytle’s sandy shore.

One of those is 64-year-old islander Steve Rhoades.

A lifelong swimmer and surfer, Rhoades is competing in R2AK on a carbon-fiber/ fiberglass prone paddleboard, stroking with his arms and steering with a foot rudder. He is first person ever to attempt the R2AK with this type of vessel. Strapping his gear to his board and body, he’ll paddle by day and sleep on land by night. “This way, I’ll be able to share my story about how you can make a change,” Rhoades said.

Rhoades spent his younger years as a U.S. Marine working in recon, conducting high-stakes and high-risk missions. Unfortunately, during his military stint, alcohol and drugs took a strong hold of him. He spent 15 subsequent years living on the street barely surviving, working odd jobs as a tuck-pointer, as a barker on Bourbon Street in New Orleans and laboring on oil rigs. But 16 years ago, Rhoades got clean and sober and started a ministry, eXtreme Sobriety, to help homeless and addicted adults recover. “It takes extreme measures to change your whole life,” he said.

Many of the teams participating in R2AK are doing so to raise awareness about, and funds for, a humanitarian issue or cause. In Rhoades’ case, he wants to draw attention to homelessness, addiction and the plight of returning veterans. Any funds he raises in excess of what is needed to complete the race will support eXtreme Sobriety’s mission.

Multiple businesses and friends have helped support Rhoades’ race preparations by providing funding, discounted or donated services, supplies, meals, technical knowledge and innumerable cheers. As a tribute of gratitude to the Bainbridge community, Rhoades plans to launch early from Fay Bainbridge on June 8 and pre-paddle to the starting line in Port Townsend.

Sitting a little higher on the water, team Sail Like a Girl will navigate the R2AK course on its 2005 monohull sailboat, Melges 32. The members of Sail Like a Girl are fierce, smart and determined sailors, swimmers, bikers and rowers aiming to make a showing in a male-dominated sailing culture. “We’re planning to go 24/7,” said team member Aimee Fulwell. “We’re not just in this to do it. We’re in it to be competitive.” Fulwell, Allison Dvaladze, Kelly Danielson and boat captain Jeanne Goussev, together with their five Seattle-based teammates, have been intensely preparing since January.

Knowing that the weather during the race is unpredictable, Sail Like A Girl has prepared auxiliary power modalities, outfitting Melges 32 with a pair of oarlocks and two stationary bicycles whose peddling power can be channeled through a propeller drive should Mother Nature decide not to blow enough wind.

“I love to challenge people’s assumptions, their stereotypes about a group of people or about their physical or mental capacity to do something,” said Dvaladze about her participation in the race. In addition to making a statement, Sail Like A Girl is raising money for breast cancer research. “We all know women who have been affected by breast cancer and we want to make an impact,” said Goussev, who explained that excess proceeds would benefit Pink Boat Regatta, which raises funds for the Breast Cancer Research Foundation.

The R2AK officially begins on June 14 and ends 25 days later. Sail like A Girl is shooting to finish in under a week, which would be a record for an all-female crew. Rhoades simply wants to finish— even if the official race has ended.

Regardless of outcomes, the Bainbridge community’s love for the outdoors, commitment to community service and its daring spirit are well represented this year in the Race to Alaska. 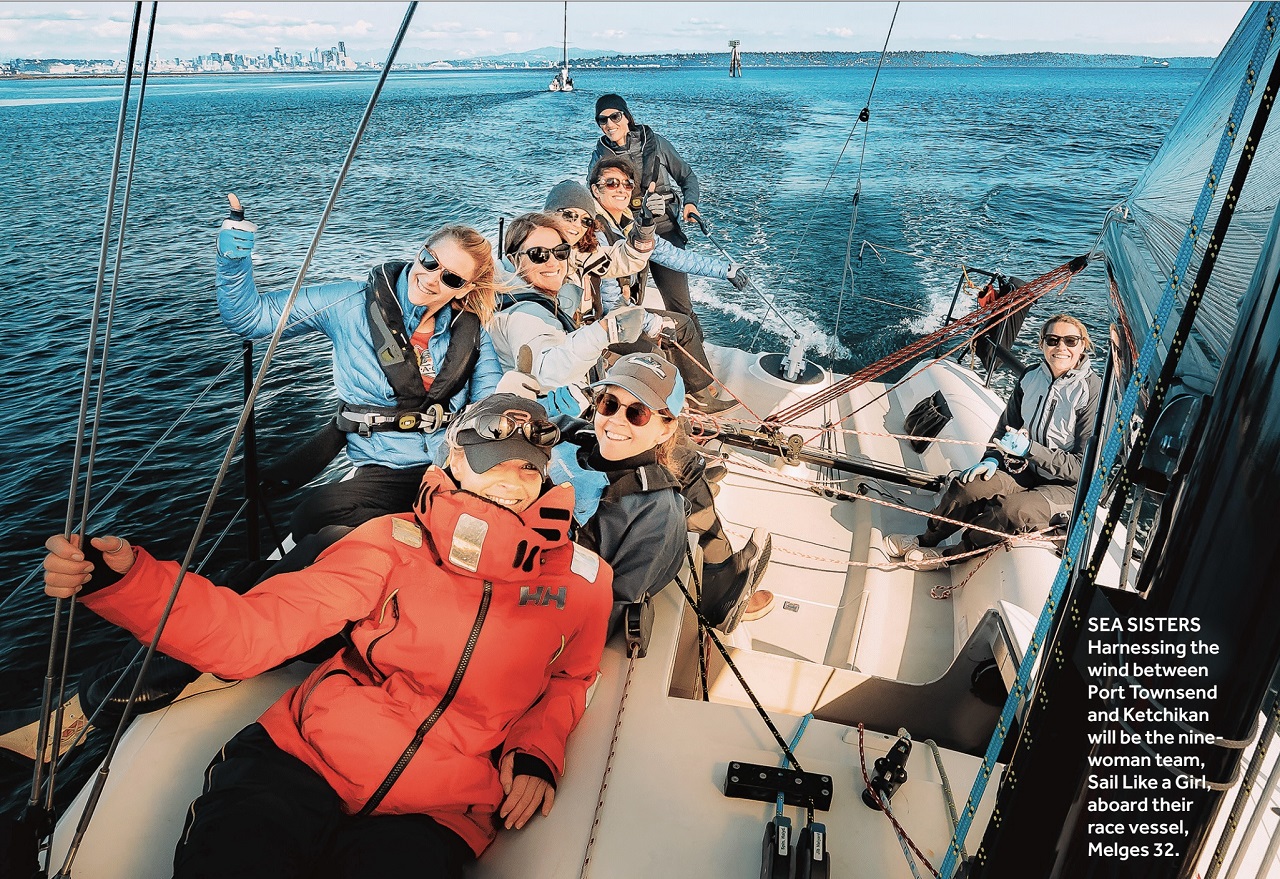