It’s The Summer Of 1956. Bainbridge Island is a tiny, tight-knit community where most of the 4,500 residents all know each other. The hottest ticket in town is for the Grange Hall where Louise Mills, Corrine Berg, Beverly Law and other musically inclined friends dress up in countrified farm clothes to perform the folk opera “Down in the Valley.” “We filled up the Grange that night,’’ said the 88-yearold Law, who remembered that first show like it was yesterday. “There wasn’t that much going on on Bainbridge in those days. Everybody was so enthusiastic and thought it was great.’’

What started out as a group of talented friends putting on a show ended up being the formation of the island’s first community organization to combine theater, dance and music, and ultimately laid the foundation for what would become Bainbridge Performing Arts (BPA). “We ended up making $150 that first night so we thought we better put on another show,’’ recalled Law, who is a professionally trained singer and had the starring role in many of the early productions, including “Little Mary Sunshine.’’

After the second show—the more ambitious “Song of Norway”—the musical visionaries named their performance group Bainbridge Light Opera Association and went on to stage one big show a year at various locations, including the old Fort Ward gymnasium. “We had no idea how many people would come to see ‘Song of Norway,’’’ Law said of that production. “But that night we were looking out and we kept seeing headlight after headlight after headlight. People came from everywhere.’’

Patrons come from Seattle, Kitsap County, the Olympic Peninsula and beyond to enjoy BPA events. BPA even has a special fund to cover the cost of tickets for those who can’t afford them. “It’s more than just the shows and the entertainment,’’ said BPA’s executive director, Dominique Cantwell, who grew up performing onstage. “BPA facilitates a dialogue and a sense of community. It breaks down the walls, the political differences. Everyone shares in a common experience.’’

The 250-seat BPA Playhouse, built in 1993 through a $1.2 million fundraising campaign, has been described as a giant community living room where generations of families have grown up sharing their talents or learning new ones. It’s a place where everyone from toddlers to senior citizens can be touched in some way. It’s where troubled teens find a safe haven and inspiration; where strangers find true love; where fathers and daughters bond over sharing the stage; where the painfully shy come out of their shells through fictional characters; where musicians share their art; where preschoolers dance in front of their first audience; and, yes, where macho men sometimes prance around in neon green tights.

“We throw around terms like ‘theater family’ a lot but it really means something here,’’ said Cantwell, who has been with BPA for five years. “The relationships that are built here—on the stage and in the audience—transcend the shows. They carry on off the stage as well to develop a sense of community that’s stronger than anything I’ve seen. The fabric is so tightly woven.” Former board member Denise Harris said some of her best memories of BPA were just being “a fly on the wall” in the dressing room, listening to young performers banter before and after shows.

“The kids that are in theater have an experience that is not much like any other,’’ Harris said. “They’re in a safe space and dependent upon everyone around them. They didn’t pay attention to the fact that I was even in the room. It was really refreshing to listen to them because they didn’t have all the inhibitions that we had when we were growing up.’’ Harris, an artist and performer, met her late husband, Bob Cederwall, in 1980 when they were both in the chorus of “The Pajama Game” at North Kitsap High School. The couple went on to perform in and collaborate on more than 25 plays over the years.

Up until the playhouse was built, BPA was truly a nomadic theater company, putting on productions in more than a dozen different locations, including the old IGA grocery store (where Rite Aid is today) and under a giant circus tent on High School Road. “We had some wild adventures before we built the building,’’ said Susie Burdick, who spent 15 years as BPA’s artistic director. “I remember our dressing rooms were in the meat locker of the old store,’’ she recalled. “We put our office next to the cashier counters.’’

Peter O’Connor, a former BPA board member and architect who designed the playhouse, recalled sleeping in the circus tent where they staged “Fiddler on the Roof” to stand guard against vandals that had struck the previous night. Performing in so many different venues gave the BPA “family” a greater appreciation for their new home when it was completed 12 years ago. “When we opened the doors for the first time, we all had a feeling of true elation,’’ O’Connor said. “We were walking into a space that was truly our own.’’

O’Connor designed the 10,650-square-foot theater to be multi functional, with administrative offices, a commercial kitchen, a set shop, a professional light and sound booth, a costume shop, dressing rooms, a green room, and two classrooms. The lobby also serves as an art gallery with rotating exhibits each month. The first month in the new building exemplified BPA’s mission to promote the performing arts and inspire and educate a creative community. In those first few weeks, BPA hosted a Pacific Northwest Ballet performance, several performances of “Cats,’’ a Bainbridge Symphony Orchestra concert, a Seattle Gospel Choir concert, a performance and workshop by the Seattle Mime Theater, a community dance, two dinners, several lectures and a church service.

BPA has become a significant force in the community,’’ said Burdick, who spent more than 20 years in Seattle’s theater community directing, choreographing and running arts organizations before joining BPA. After moving to Bainbridge Island in 1980, she was recruited by the late Sue Harader to start a preprofessional training program, called Grease Paint, for teenage actors. She also helped start the island’s Russia Connection, a program to co-produce plays with a professional Russian theater group in Novosibirsk.

Burdick, who is now the executive director of Kids Discovery Museum (KiDiMu), remembers that her first Grease Paint meeting with 20 teenagers got off to a rocky start. “They were bouncing off the walls and being really weird.’’ She told the teens, “No judgment, but I might not be the right person for this job.” After they calmed down and got their act together, however, “we were bonded for life,’’ Burdick said. Some of her former students visit her on occasion at KiDiMu, bringing their own children along.

The Grease Paint program has since evolved into BPA’s theater school, which Cantwell said teaches more than acting. “Our goal is to develop wellrounded successful human beings,’’ she said. Just as the original Bainbridge Light Opera evolved from one big show a year to several, BPA has grown to the point where it is now “bursting at the seams’’ as the demand for bigger shows and events rises. Talks are under way for a capital campaign to expand beyond the current playhouse and its two portable buildings, but Cantwell said no plans have been formalized. “We know there’s more demand than we can accommodate now,’’ she said. “The possibilities are endless. But the focus will always be on the community.” 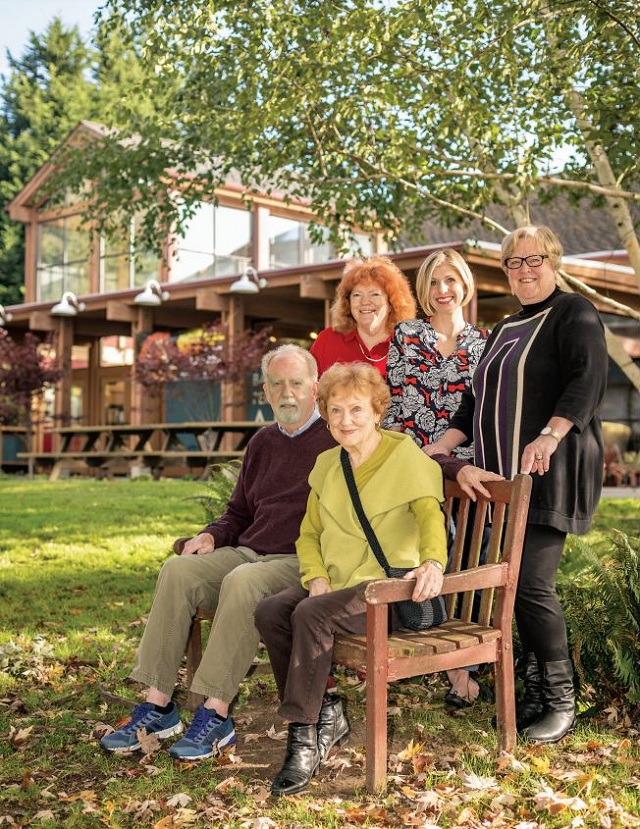 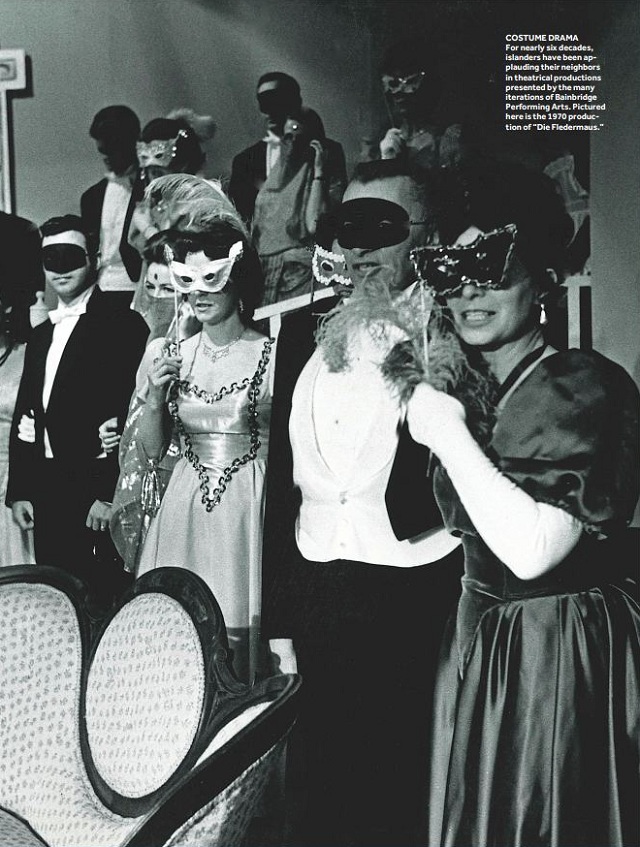