It’s a soggy Thursday evening, and seven Bainbridge teens and tweens are reciting lines from “A Midsummer Night’s Dream” in a rehearsal studio from a Winslow office building.

Leela Vosshall nails the German accent. Ellie Osburn excels at a resounding senatorial style while Nicole Washington delights in speeding through it at a nearly incomprehensible pace. And Morgan Soltes, the smallest of the group, recites it standing atop a stool, head raised high, without missing a beat. They are clearly having fun.

The talented bunch is part of the Northwest Young Actors’ Studio, an advanced acting class for kids offered by Ovation Performing Arts Northwest and taught by Ovation co-founder Ron Milton.

Ovation is in season 15 and busy planning for a changing future. With a recent $25,000 cultural grant from the city, the troupe plans to expand its educational programs, increase ticket sales and bring in a new crop of leaders.

Milton and his wife, Marijane, who have been at the helm and the heart of the operation from the start, are planning their gradual exit from Ovation leadership. Ron, a seasoned theater professional and teacher, has directed all 32 major shows the group has staged over the years. Marijane is managing producer. Both often juggle multiple jobs, including sets, lighting, props and costumes. After suffering a heart attack last year, Ron took stock of his role in the company. “Directing is pretty much all consuming, and this is my retirement job,” he said.

This summer’s production of “The Pirates of Penzance,” playing July 13 to 29, will be Ron’s last as resident director. The Gilbert and Sullivan show was Ovation’s first on the Bainbridge High School stage, bringing the Miltons full circle. Ron will remain involved as artistic director through the leadership transition and continue to lead the Young Actors’ Studio, which has a special place in his heart.

And there are more changes on the horizon. The high school theater, where Ovation staged all its big summer and holiday musicals, is set to undergo a multimillion dollar renovation. That could leave the group homeless during construction and possibly thereafter if fees for the revamped theater are budget breaking, said Marijane.

“We’ll figure it out,” Marijane said. “You really have to have something you want to say, to want to touch people. That drives us.”

Members of Ovation’s board are exploring partnerships with other island arts organizations and discussing musical and dance talent collaborations. Although not ready to discuss details, Ovation board member April Trabucco is optimistic. “It’s amazing what Ovation has been able to accomplish in 15 years,” she said. “It’s a real testament to Ron and Marijane’s legacy, and we want to honor that.”

Among Ovation’s accomplishments are attracting an audience of thousands with semiannual main-stage productions, staging every musical with a live orchestra and sophisticated scores, providing rigorous performing arts education, helping launch a number of successful theater careers, and earning accolades along the way.

And all of that without the benefit of paid staff like that of Bainbridge Performing Arts.

The two theater groups view their relationship as complementary, collectively developing talent and raising the bar for Bainbridge theater. In fact, it was at BPA, where Ron directed the “Sound of Music” in 2003, that the seed for Ovation was planted.

The Miltons are proud that several former students have gone on to successful theater careers, but that’s not the goal when working with youth. The aim is more fundamental—to give kids life skills and confidence that will serve them in any pursuit, whether giving a presentation or nailing a college or job interview.

Back at the rehearsal studio, Ron puts the girls through their paces in preparation for a performance at the Ovation Gala. They swiftly pivot from whimsical “Alice in Wonderland” scenes in English accents to a “Hamilton” rap number. No one flinches when Ron shouts, “Out of tune!” in the middle of the “Hamilton” piece. “Ron expects a lot from his youth performers,” said Trabucco. “And they deliver.” 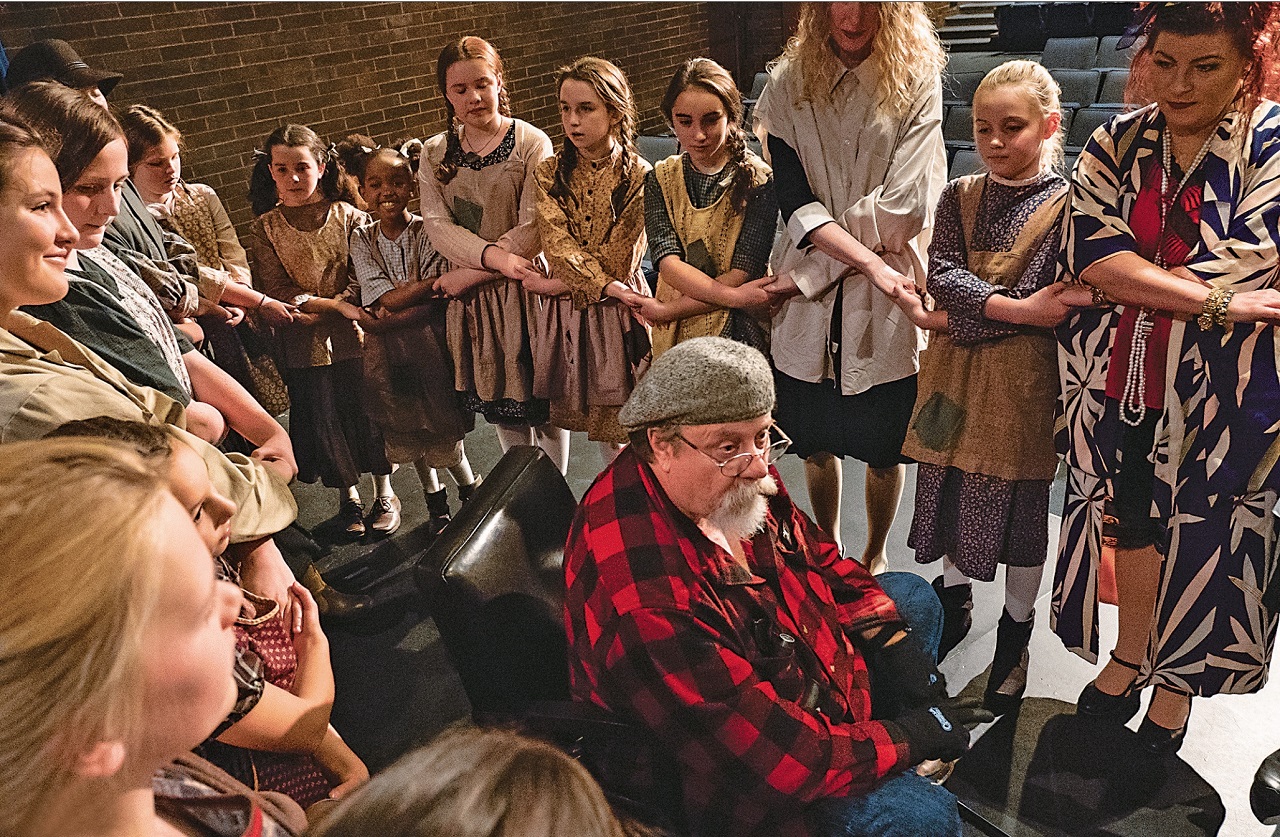