Waypoint Park is, depending on one’s direction of travel, either the first park or the last park visitors and residents encounter in route via the Bainbridge Island – Seattle, Washington State Ferry. This 1.10 park is located at the corner of Winslow Way East and State Route #305 immediately north of the ferry access. At slightly over an acre this is a passive, linear type park site. As its name implies the location is a community gateway feature. The park provides a public site for what has occurred in the road way and sidewalks at this location for generations. It is a place of homecoming and departing for local residents as they walk to and from the ferry, and a place to physically orient oneself for the visitor. In times of national distress or occasions when community dialogue concerns a civic question, it is location for community messaging, such as those who protested in silence against war and known as the ‘Women Dressed in Black’. Envisioned as a benefit to visitors and residents alike, park elements include signage, landscaping, interpretation and a hard surface plaza area with a backdrops of the ferry looking east, and looking south, the Winslow Ravine.

In 2012 and with assistance of over 50 volunteers under the design guidance of architect Johnpaul Jones, our community’s ‘front door’ witnessed this site’s transformation from a previous vacated gas station into a welcoming park destination. 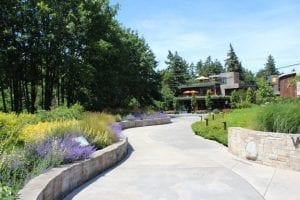 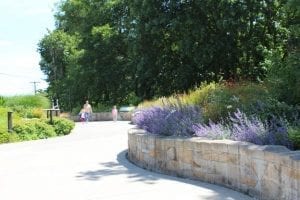