Need a Good Reason to get up at the crack of dawn? How about joining the Bainbridge Aquatic Masters (BAM) swim team at the Bainbridge Island Aquatic Center?

Despite the intimidating name, one need not have been a swimming star in high school to become a member. Masters simply means 18 and older. The local team is part of U.S. Masters Swimming, a national organization with nearly 65,000 swimmers nationwide; most local groups, such as Bainbridge, have a coach on deck. BAM has three: head coach April Cheadle and assistant coaches Jim Stretch and Kate Carruthers

The swimmers come in all shapes and sizes, abilities and ages. They only need to be able to swim a single lap in the pool, “however they can,” said Cheadle. “I’ve even had people dogpaddle their way down.”

Since Cheadle joined the local group as coach in 2011, the team has more than doubled, growing to its current 170 members, the largest masters swimming program in Washington. Cheadle is known for giving each swimmer just the right guidance at just the right time. She creates workouts that play to each team member’s needs for improvement—and that are sheer fun. And with three to four practices offered most days (the first beginning with a painfully early 5:15 a.m. start time), swimmers can pick a fitness schedule that works for them.

“Many of the seasoned swimmers say she’s the best coach they’ve ever had,” said Denise Dumouchel, 56, a BAM member for the past couple of years. “She’s like a savant.” Dumouchel first headed to the aquatic center as treatment for her Achilles tendonitis. Approached by a team member about joining BAM, she found camaraderie and a welcoming social group. She also found a new proficiency for which she credits Cheadle completely. “I really just learned how to swim,” Dumouchel said, “while before I was just flopping around in the water.”

Dumouchel has even gone on to join the team in competitions and for open water swims in the spring and summer when some BAM members head to the Sound. What is that like? “Cold!”

Passionate about teaching and coaching, Cheadle focuses on specific techniques for breathing, strokes and distance. Masters swimmers may have slowed over time in the water but Cheadle said there is always potential to learn and improve their  2014 she received the Kerry O’Brien coaching award for re-energizing and creating opportunities for swimmers. Additionally, in a show of admiration for their trainer, team members nominated Cheadle for Speedo’s Coach of the Year competition.

Regardless of formal accolades, BAM swimmers recognize the value Cheadle brings to the group. “She’s admired and loved by all the team members,” said John Baker, 67, a longtime district is looking into the feasibility of a larger lap pool that would help unburden the center’s current 5 a.m. to 10 p.m. schedule. Naturally, BAM swimmers would dive right in. “It would also help the age group lessons and sport teams,” Baker said, “and allow Bainbridge to host big competitions.”

In the meantime, Cheadle is pleased with the present setup and like many others in the BAM program, cherishes the relationships form and efficiency. “Older athletes can’t push their way through like younger ones do,” said Cheadle, which makes technique that much more important.

Recently Cheadle applied for USMS Level 4 (the highest) coaching certification. If accepted, she would become the first coach to earn that designation in Washington state, joining the ranks of just 29 others nationwide.

She has twice been named Coach of the Year by the Pacific Northwest Association of Masters Swimmers, and in competitive swimmer and Cheadle fan. Having once started a masters swim program in Yokosuka, Japan, Baker said he especially appreciates what Cheadle offers at the pool.

“She spends equal time with all the lanes, motivating, correcting strokes and watching everyone.” Being guided by Cheadle on new techniques has been “like learning to swim all over again,” he said.

Given BAM’s growing popularity as well as the overall increased use of the aquatic center, the park that have been established in the Ray Williamson pool. “There’s great joy in coaching masters athletes,” said Cheadle, “because for many, it’s their moment to really move and everyone leaves with a swimmer’s high.”

What would she say to someone nervously considering the masters swim team? “It might look intimidating from the outside, but once you jump in the water, it’s a whole different world.” 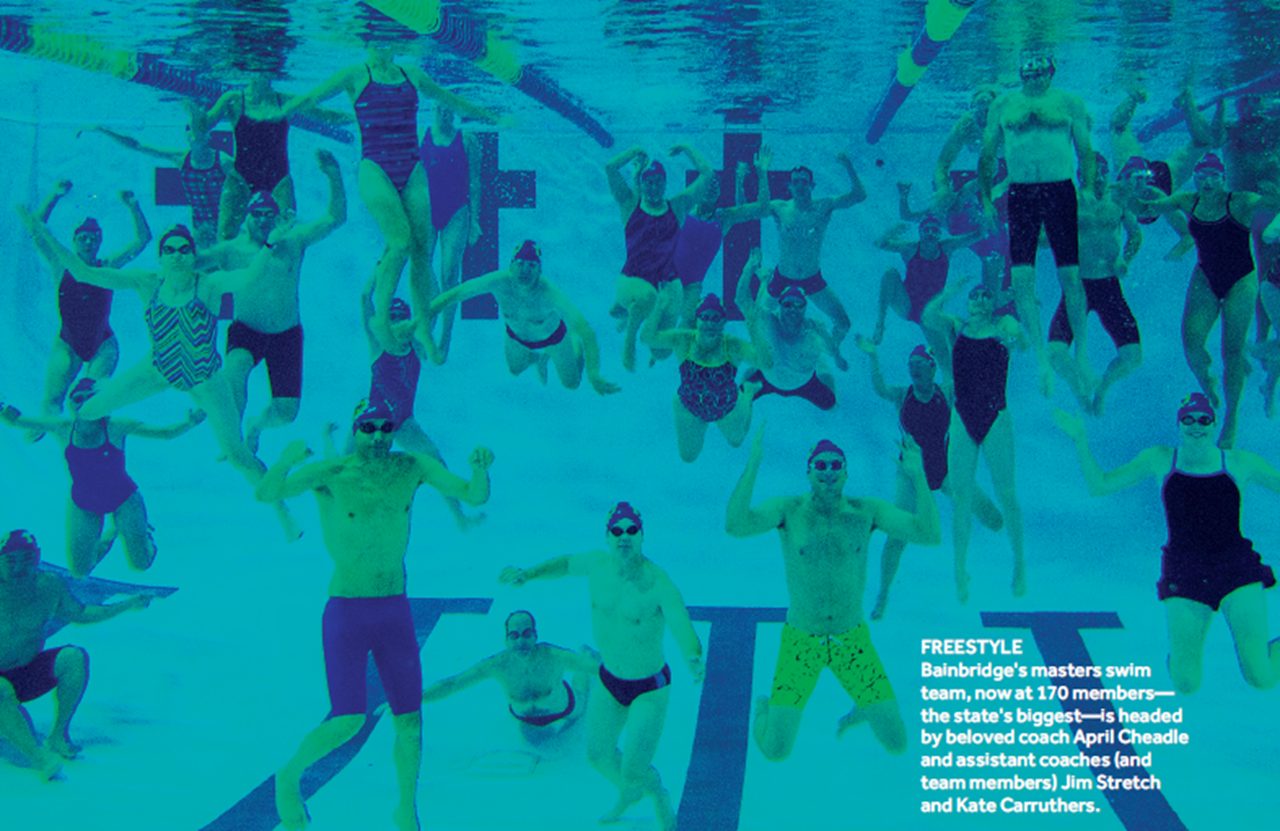