Breakfast of Champions // Starting the Day With the Oatmeal Club

Give Us this day our daily…oatmeal? Sure, if you’re a member of the Oatmeal Club, a “boys only” group that meets at Eagle Harbor Congregational Church (EHCC) every Thursday for breakfast, companionship and a presentation. The bland porridge reference belies the vibrancy and extraordinary commitment level of this group of 60 retired gentlemen. Begun in 1989 as a ministry of EHCC by nine church members, the Oatmeal Club is now packed with men from all faiths and backgrounds. It was established to foster spiritual support for men in the church, but expanded its mission over the years to include any man in or out of the church who wanted to join.

As a result, the Club exploded and now boasts an enviable waiting list, as membership must be restricted due to Fire Department capacity regulations on the EHCC meeting hall, the OC’s “clubhouse.” According to Russ Freeman, the only surviving founder, new members only get in if a current member “passes on or passes away.” No one seems to leave otherwise. Members arrive each week by 7 a.m. when the oatmeal, sweet rolls and fruit are laid out tidily on the counter and the men line up to help themselves.

For $3, members enjoy a meal together followed by a keynote address or occasional poetry reading. Those invited to speak are carefully chosen to match the education level and broad collective interests of the group. Recently, a UW professor talked about the monetary situation in Greece. Another presenter delivered a dynamic discussion on the history of language and belted out selections from Beowulf in its original tongue. Once a year, the OC switches things up and indulges in eggs and bacon for an extra $2. Jack Fleming, the Oatmeal Chef, helms the kitchen side of these gatherings and has done so for many years.

Originally from Maui, Fleming is a retired helicopter repairman who ensures the kitchen adheres to a 7 a.m. to 8:20 a.m. timeline. The schedule is important as it’s part of the original set of rules established by the founders so as to oblige commuters. Although most of the members now are not ferry-bound, the group still observes the tradition. In fact, by 8:30 a.m., the meeting room looks as if no one has been there; tables have been broken down and all the chairs are racked and tucked into their cubbies. But besides the strict schedule, no other charter governs the Oatmeal Club.

The men are brothers in companionship and motivated because of that more than anything else, according to Freeman. “It really has to do with the diversity of the members and their enjoyment of each other,” he said, when asked about the Club’s success. The money collected from the OC goes to breakfast supplies and into the church. Over its 26 years, proceeds from the Club have purchased a new stove for the kitchen and updated the electrical system, among other things. The members’ individual skills have also benefited EHCC. Freeman, for instance, worked for Boeing and then became a contractor on Bainbridge Island. He helped fortify the church’s bell tower ladder when it became unsafe some years ago.

In 2009, the Oatmeal Club experienced a bit of stardom when it served as part of the background flavor for the film “Old Goats,” which features Club members Bob Burkholder (now deceased) and Britt Crosley. Produced by former Boeing videographers who happened to know the pair, the film enjoyed some commercial success (including a run at SIFF) and is now part of the Club’s local lore. In the main, the members are there to eat and enjoy each other’s company and they conclude each meeting accordingly. Each man bows his head and clasps his neighbor’s hand, although some must reach around canes to do so. “Give us this day our daily bread,” the men pray. Which may be another way of saying what Russ Freeman likes to cite as the unofficial motto of the Oatmeal Club: “Enjoy breakfast.” 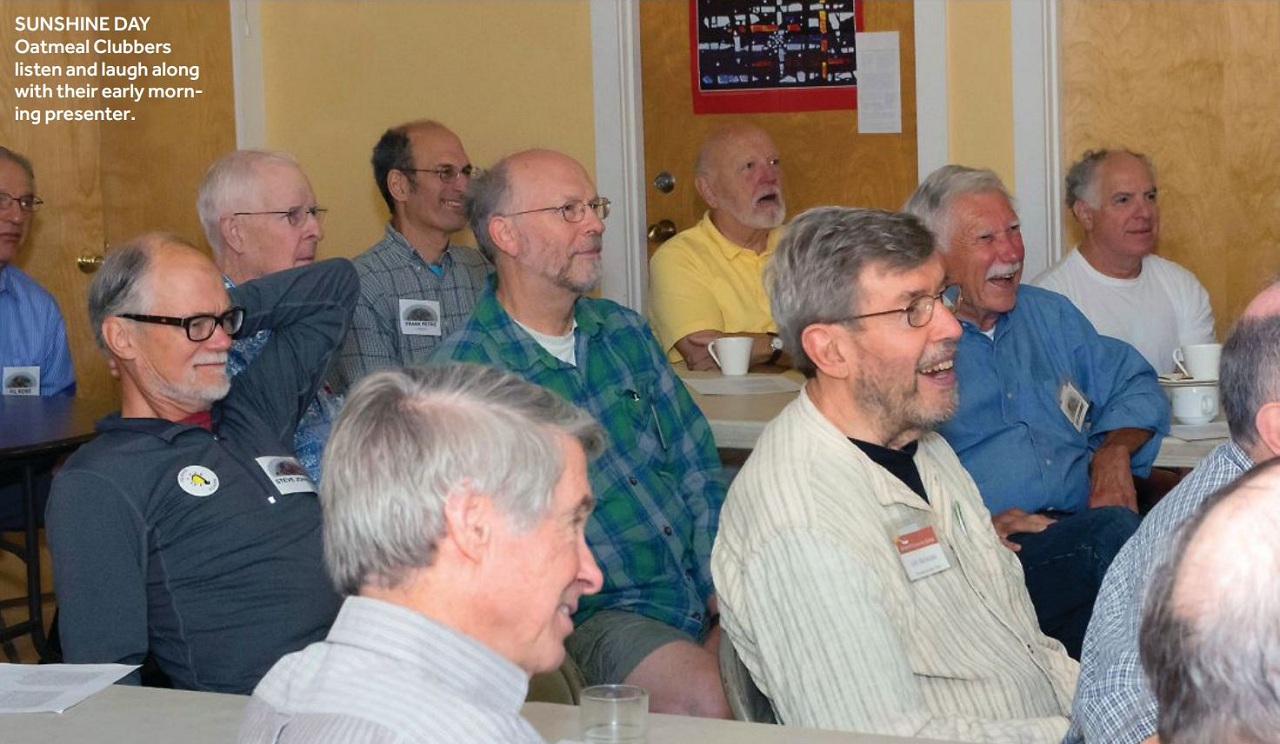