While T&C Market is known among locals as our downtown’s heart, many refer to the little white church on the corner of Winslow and Madison as its soul. If you live on Bainbridge Island, you’ve probably been to Eagle Harbor Congregational Church, if only to warm up at the annual UNICEF Halloween fundraiser, or to shop at the Winter Farmers’ Market. Perhaps your children attend the Madrona school, housed in the education wing of the building, or your father heads down on Thursday mornings for oatmeal and a presentation at the Men’s Breakfast. Local organizations like the Bainbridge Ometepe Sister Island Association, Twelve Step groups, Teen Talking Circles and Girl Scouts meet in the fellowship hall.

On the last five working nights of each month, the interfaith Super Suppers group serves a free meal to those in need. The sanctuary itself feels burnished with countless smiles and tears from a century of weddings and memorial services. The historic downtown church that embraces “freerange Christians” on Sunday embraces folks of all stripes during the rest of the week, and this has been true from its inception. It all began in 1882, with homesteaders Ambrose Grow and Riley Hoskinson. These two Civil War veterans came west from Kansas in the 1870s and 1880s, respectively.

According to Harry Wallace, an early church historian, they made quite a cantankerous pair, waging a war of words in almost every edition of the local paper. “They differed in nearly everything except the work of the church and unalterable opposition to drink, dancing and cards.” The list of charter members of Eagle Harbor Congregational Church reads like a roster of current island street names, with Grow, Parfitt and Finch among them. In those days, the town was known as Madrone, Winslow Way was little more than a dirt path, and the Sunday school teacher rowed kids across Eagle Harbor in a skiff.

For more than 10 years John F. Damon, the first pastor, preached on Sundays in the settlement schoolhouse and traveled on alternate Sundays to Port Madison and Port Blakely to preach. In 1895 the industrious members drew up plans for a proper church building complete with steeple and bell tower, at a cost not to exceed $1,050. The new church came in on budget less than a year later, on November 1, 1896. As Ray Parfitt relates in his 1982 centennial account, “Brick, money and labor were given. Children collected dimes, and the Ladies Aid gave $70 for chairs.

When finished, the church was a credit to the whole community.” Two years later, the church bell arrived from a Cincinnati foundry. Over the years the building’s footprint has grown, and even taken a step south. Originally the church entrance faced east, towards what is now Madison Avenue, and the building abutted Winslow Way to the north. In the 1960s, the entire church building was raised, rotated a quarter turn and moved south on the lot, to make room for future growth. The church building has been in continuous use for 117 years, and the current stewards take their mission very seriously. “I think there’s a healthy self-consciousness about it being a community resource,” said Dee Eisenhauer, the church’s pastor for the last 14 years.

In 2004, the church embarked on a major capital fundraising campaign for crucial repairs to the roof and sprinkler system. With the bulk of the money raised from church members, church leaders then reached out to the community for help saving the iconic steeple, which was suffering from dry rot. Islander Jim Chapel was instrumental in the successful community campaign. “It’s just so much a part of the island,” Chapel said. “If you had to pick out a dozen places on the island that were key places, that church would be right up there in the top two or three.” 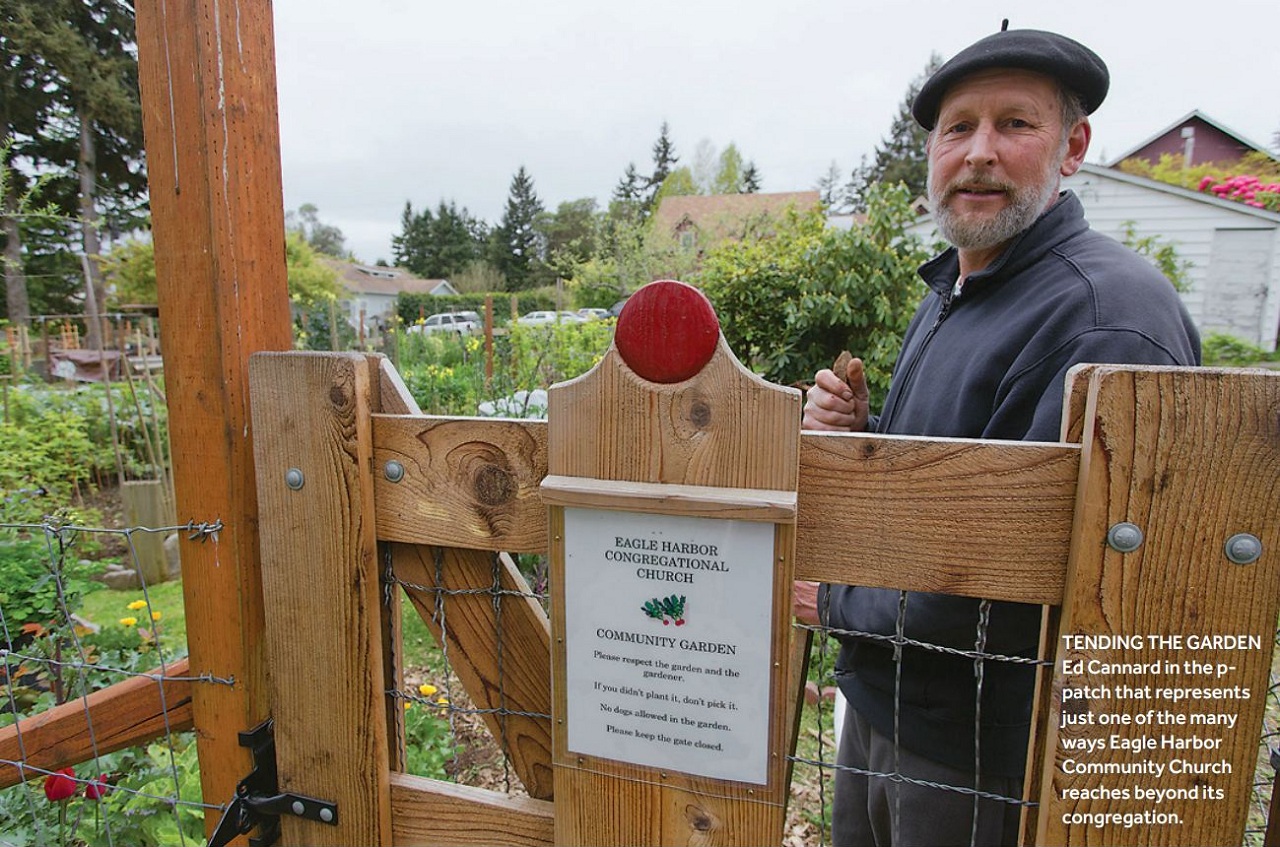 Breakfast of Champions // Starting the Day With the Oatmeal Club