We islanders love our avian friends (except possibly that territorial owl on the Gazzam trail). We invite them over with feeders full of seed and suet (homemade, of course) and skulk along the water lines with binoculars to spot even more. As the days get longer, many islanders look for certain special arrivals as proof that summer has indeed arrived.

Local retired ornithologist Lee Robinson notices the early summer appearance of the male rufous hummingbird that is conveniently timed with the flowering of salmonberry and currant bushes. Rufous hummers are tiny but also mighty and display strong territorial behavior toward other hummers around feeders. Their glowing brown form may loudly buzz past before even being seen.

Osprey are Robinson’s second favorite summer cast member. Many nests atop the island’s cell towers (look up around Battle Point Park and Coppertop Park) hold noisy young osprey later in summer. Large brown birds with a white underbelly, ospreys use their talons and hooked beak for eating fish. Osprey can resemble juvenile bald eagles speckled brown and soaring on sunny days, but the osprey’s very white undercarriage gives them away.

Rounding out Robinson’s top three favorites is the olive-sided flycatcher, which migrates the farthest of all flycatchers, some traveling from Bolivia to Alaska. These olive, white and gray birds can be heard singing in the Grand Forest during summer, a call that sounds like “chi-ca-go!” according to Robinson (or “quick, three beers!” as famously interpreted in early guide books).

Avid island birder Brad Waggoner looks forward each summer to the Swainson’s thrush. Sporting an understated olivish-gray appearance with thin, white eyeliner markings, the thrush has a melodious song of summer. “Starting in mid-May the lovely fluting, rising and rolling song can be heard in many wooded areas on Bainbridge Island,” said Waggoner. This author once had a Swainson’s thrush nesting in a rhododendron next to a living room window and fondly recalls the parents’ songs and short wits and peeps each evening.

Waggoner’s other favorite is the handsome and colorful cedar waxwing. A summer guest often traveling in flocks, the waxwing loves bugs and berries later in summer and so isn’t easily spotted by those of us in the bird feeder crowd. Their Zorro-like black eye mask and red and yellow fringed feathers make for quite the dashing profile when birders catch a glimpse of them fly-catching in midair.

A special summer migrant that relies more and more on public support for survival is the purple martin. These broad-chested swallows arriving from South America are colony nesters that have been in decline due to competition with house sparrows and starlings for nest sites. Recognizing that martins ate a lot of insects, Native Americans hung hollow gourds for nesting to encourage the flocks. More recently, in conjunction with the Kitsap Audubon Society, locals have set up white nest boxes and gourds that hang over water, including in Eagle Harbor, for purple martins.

In typical island fashion, the project involved a combined effort in gifts of time, design and materials by BARN, Builders FirstSource, Peninsula Paint and even boats used to install the boxes and gourds over water. Volunteers are welcome to assist the Audubon Society in maintaining the sites and supporting the program by positioning nest boxes in marinas and other waterfront areas. Learn how to make nesting boxes and just about everything else on purple martins at the Purple Martin Conservation Association’s website, purplemartin.org.

Only seeing the usual suspects of sparrows, juncos and chickadees near your home? Robinson and Waggoner both noted that the diverse habitats on our small island—such as woodlands, open meadows and grassy lawns—mean that a short walk or turn around the corner can lead to an entirely different flock of feathered friends, in summer or any time of year. 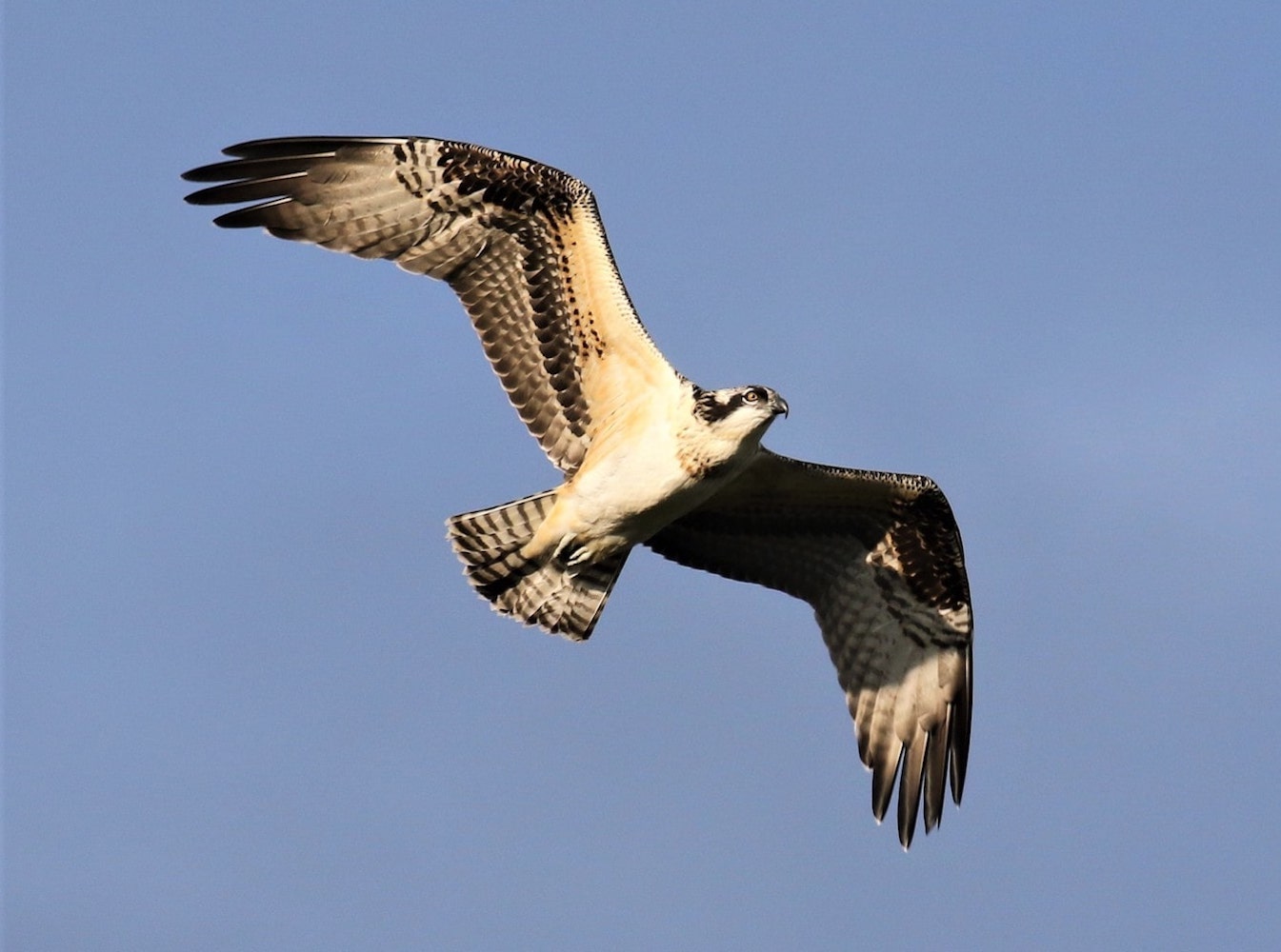 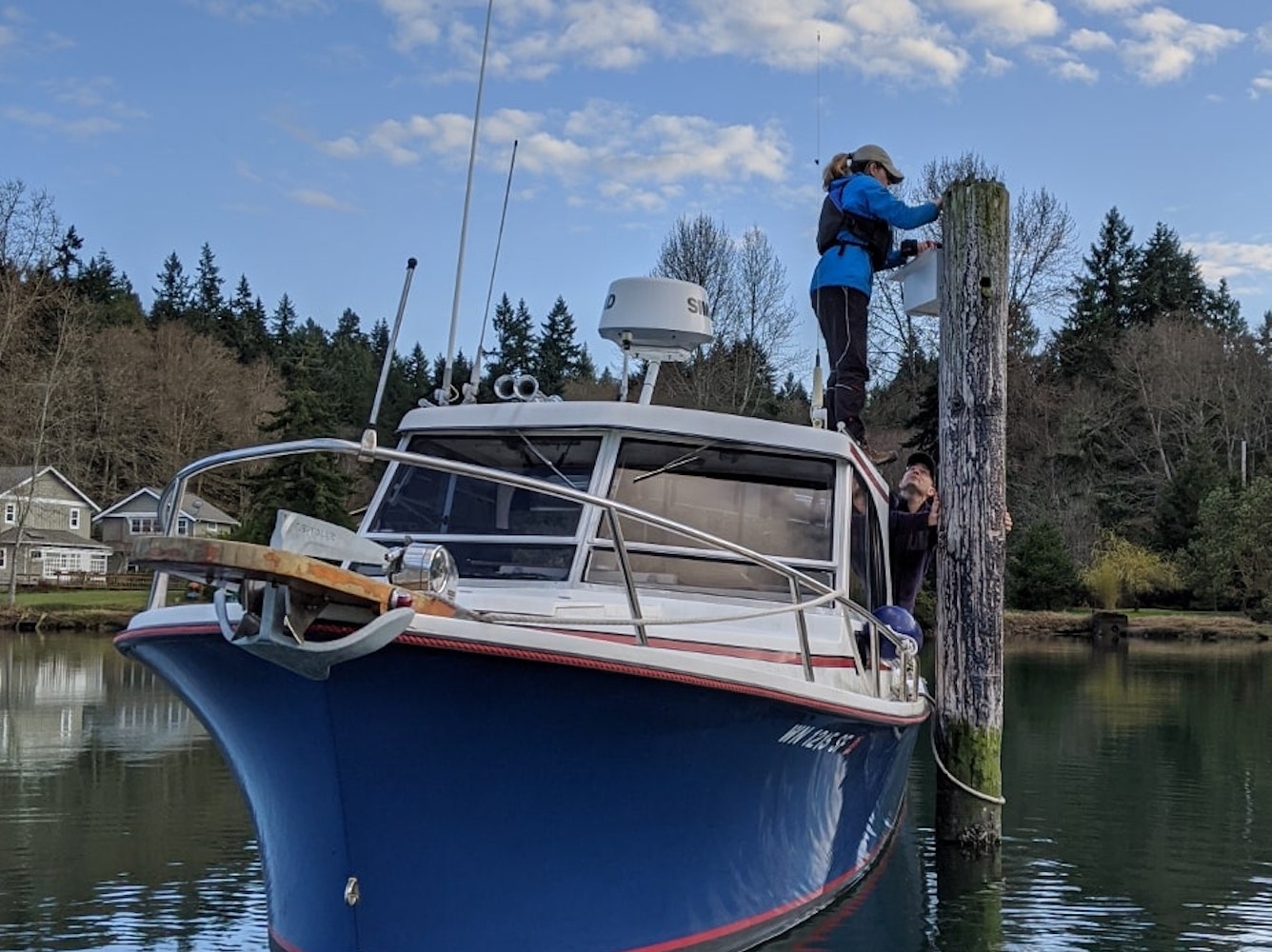 Joy Tappen installs a nest box for purple martins, whose numbers have declined in recent years due to competition with house sparrows and starlings for nest sites.

Room for Two // An Island Couple Shares Their Beach Retreat

Hanging With Howlers // Wily Ways to Coexist With Coyotes