For birders, it’s all about the species. Names like Hutton’s Vireo, Violet-green Swallow, Bewick’s Wren and Golden-crowned Sparrow turn ordinary birds, flitting through the trees or grabbing seeds from a feeder, into something a little more special. Just walk in the front door of Bay Hay & Feed, where they sell 2,000 pounds of bird seed per week, and you’ll get a sense for the popularity of birding on Bainbridge.

“Birds are endlessly fascinating,” said local and Washington state bird expert George Gerdts, a birder since he saw his first Blackburnian Warbler in the sixth grade. Gerdts, a retired teacher, approaches birding from a teaching point of view. With Sibley’s Guide to Birds always on hand, he leads birding trips around the island, including a popular birding circumnavigation of the island. “Getting to know the names of the species, what they eat, who they hang out with—it’s fascinating.”

Brad Waggoner, a local landscaper, considers himself a “fanatical” birder. “Birding gets me outside, and I love that,” he said one morning, before heading out with a digital camera equipped with a long 600 mm lens and a tripod outfitted with a spotting scope. For Waggoner, birding is a search for the unusual, spotting birds like the Says Phoebe, Chipping Sparrow or the turquoise-blue Lazuli Bunting that nested for the first time on Bainbridge last year. For many birders, maintaining lists of birds they see each year or a “life list” of species they’ve seen over their lifetime keeps them watching for new birds.

Waggoner also sees birding as “citizen science,” providing valuable information over time. He learned to watch birds as a boy, birding with his father. Now he continues the tradition, keeping track of behaviors, numbers of birds and arrival dates during migration season, noting any fluctuations. “Fifteen years ago California Quail were fairly common on Bainbridge. Now I hardly see them,” he said, pointing to habitat loss and an increase in predators like opossums and raccoons as likely causes for the quail’s recent decline.

Still, with the variety of habitats on the island, Bainbridge is a gem in the region. From Fay Bainbridge Park and the shores of Rockaway Beach, to the estuaries like Murden Cove and Schel-Chelb, to the forests of the Gazzam Lake and the Grand Forest, Bainbridge Island has provided a home—or at least bed and breakfast for those passing through—to more than 270 different species. That’s a nice life list for the island itself.

Identifying the song of a bird is one key to identifying the species. “It’s that little chirping or trill that you learn to listen for,” said Waggoner. “Or the way they fly. You start to notice the little things.”

We tagged along with Gerdts to one of his birding go-to’s. “Fort Ward is my favorite spot to bird because of the variety of habitat in this one-mile walk,” said Gerdts, looking out over the water to identify a cormorant skimming along the water as either a Brandt’s or Pelagic Cormorant. “The Brandt’s [Cormorants] have started nesting in Puget Sound over the last 30 years. They come here in the winter for food, but most of them head south to the San Diego area to nest in the summer.”

As it turns out, many bird species on the island are migrants. Coming and going north or south, birds like Common Murres, Pacific Loons, multicolored Harlequin Ducks and common Robins from Alaska arrive here in the fall to overwinter. Others, like Black-throated Warblers and Pacific-slope Flycatchers return in the spring to nest. The most popular of these “spring breakers” is the Osprey pair that nest on the water tower at Battle Point Park.

On a recent birding adventure to Ecuador, Gerdts encountered a Swainson’s Thrush, known for the ethereal song we hear regularly beginning in late May. “It’s one of our neo-tropical migrants. We like to think of them as ‘ours,’ but they spend seven months of the year in Ecuador or Costa Rica.” Whether you consider birding a lifelong avocation or a backyard birdfeeder hobby, birds visiting from far and wide add to the enjoyment of island life. 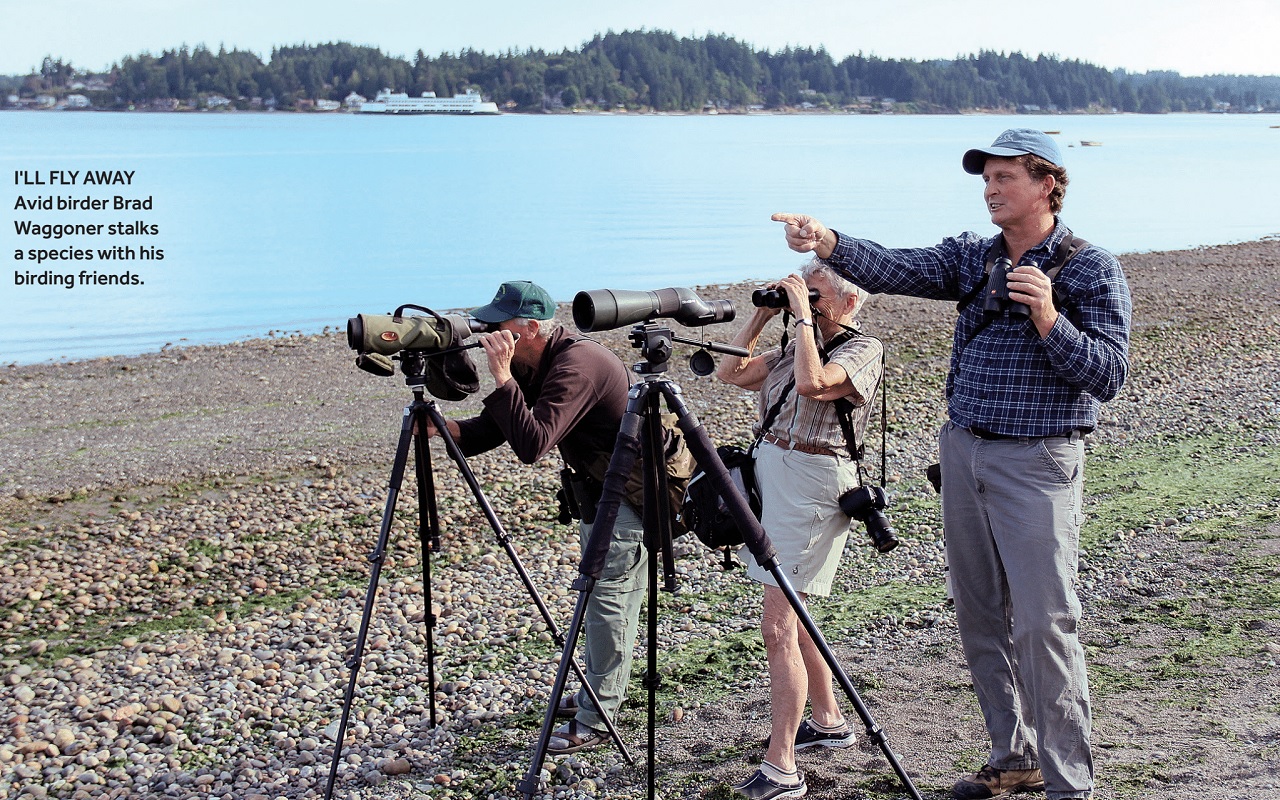