Hanging With Howlers // Wily Ways to Coexist With Coyotes

As a Bainbridge Islander, you’ve likely seen a coyote trotting across a road or trail, heard one (or more) howling from the woods, or listened to someone’s tale of an extraordinary coyote sighting. Is all this coyote activity something we should be concerned about? Not necessarily. In fact, coyotes are good for Bainbridge Island.

“I just got a call this morning about a coyote that moved in next door to some people while they were away on vacation,” said Lynne Weber, rehabilitation manager for the West Sound Wildlife Shelter. The coyote, recently dispersed from his family, was looking for his own territory. He discovered one, taking up residence under a platform originally meant for a shed. “He found the perfect spot,” she said. “There was nobody around, he could lie in the sun and watch the field behind the house, or hide under the platform if he needed to.”

Bainbridge Island’s wide trails afford easy travel for coyotes. The island’s plentiful fruit trees, berry bushes, and bird feeders can provide 40 percent of a coyote’s diet, and open compost piles allow the animals to scavenge for tasty leftovers and hunt for rats. And, of course, free-ranging chickens are easy to catch. Coyotes on Bainbridge also enjoy top predator status with no worry of being eaten by a cougar or bear.

“Having a dominant carnivore on the landscape is an indicator of a healthy ecosystem,” said Stan Rullman, wildlife/conservation biologist and educator on the island, explaining the coyote’s role. As well as keeping the rat, mice and deer populations under control in the usual predator-prey relationship, coyotes fill a purpose that often goes unnoticed. Populations of medium-sized predators, “mesopredators,” like raccoons, opossums, skunks and housecats are kept in check. Without coyotes, ground-nesting birds like towhees, song sparrows, Wilson’s warblers, juncos and Swainson’s thrushes, preyed upon by these mesopredators, would all but disappear. “The benefits of having coyotes on the island far outweigh the risks,” Rullman said.

The coyote population itself is another example of natural equilibrium. Where a healthy coyote population exists with strong competition for food, females give birth to around two pups per year. When there are fewer coyotes with plentiful food, however, females may have six to eight pups. Trapping and removing coyotes from a place, as was done around Gazzam Lake last summer, provides more of a problem than a solution. For a period of time, there will probably be more coyotes around Gazzam until nature can sort out the imbalance.

Alice Skipton, co-farmer at Heyday Farm, a sustainable farm on Bainbridge that uses organic practices, knows coyotes are integral members of the ecosystem. “We would never use lethal control against coyotes. That would go against our philosophy,” Skipton said. Instead, they “coyote proof” the farm by using electric, predator-proof fencing and bringing all 1,000 chickens in each night. “We have added a second level of protection by training two Italian sheep dogs, Rainier and Olympus, to guard the chickens,” she said. “One goes out to meet the threat, while the other herds the chickens. So far, it seems to be working.”

So what can we do to coexist with this essential predator? Coyotes can learn to stay in their own territory, leaving yours to you. Don’t leave free food around for them. Pick up the fallen apples, pears and other fruit in your yard. Clean up spilled birdseed, feed your pets inside, and keep cats indoors and dogs on a leash. Predator-proof your chickens with fencing and lock them in a coop at night. Compost in secure, plastic compost bins, and store garbage in the garage until pick-up.

If those methods don’t work, use non-lethal techniques known as “hazing.” For example, throw rocks or a soda can filled with pennies at a coyote, use an air horn or pepper spray, or hit them with a pressure washer, hose or a Super Soaker filled with vinegar. You can even fire your paint ball gun at them—anything that scares them without causing permanent injury can work.

If you have questions, give the WSWS and Lynne Weber a call—they are happy to help. The wildlife shelter has even held community meetings to help neighbors address coyote issues.

Learning to coexist with Bainbridge Island’s coyotes is essential to maintaining the natural environment we have come to love and enjoy. A bit of personal responsibility and tolerance for our four-legged neighbors may be all it takes.

To contact the West Sound Wildlife Shellter, go to westsoundwildlife.org 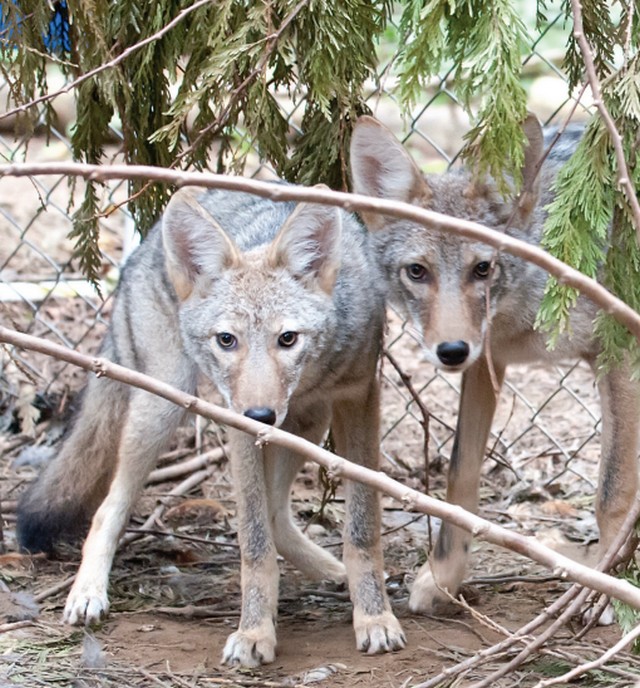