Imagine a card game that you never tire of. One that sharpens your intellect and focus and allows you to gather with old friends and also make new ones. It’s the game of bridge and it is played every Tuesday and Thursday at the Bainbridge Island Senior Center.

Because it is played with two sets of partners, the game of bridge involves skillful bidding and mind reading. It is tactical, with built-in randomness that requires the ability to assess probability. It is also a game that reinforces the need for community at least four players are required, and all comers are welcome at the senior center.

Reed Price, who became executive director of BISC in April 2017, said he wanted to expand the services offered to older adults by first building on existing programs. Bridge is just one of them.

“Bridge has been around for decades, but there hadn’t been any teaching at the center,” Price said. He was encouraged when people asked him if he could bring in someone who could train them on the game. Some had learned it in college and needed a refresher; others thought it would just be fun to try it for the first time.

It was fortuitous when Mark Siler, a 10-year bridge player and teacher, approached Price in May last year to inquire about teaching and helping others embrace the game.

“I wanted to reinforce an existing bridge community and improve my own game,” Siler said. “The best way to learn is to teach.” Siler now teaches Party Bridge on Tuesdays, where newcomers of all ages are welcome. Duplicate Bridge, which is more competitive, is played on Thursdays. Price and Siler said that the major difference in days is that there is a lot more chatter and laughter on Tuesdays. “It’s a social game first and foremost,” Siler said. “It’s also an intellectual challenge, and at some levels a competitive game. It can occupy you for 30 years, gets you out of the house, and out and about in the community.”

Price said that Duplicate Bridge attracts lifelong bridge players, some of whom have played since they were teenagers. “The enjoyment of Duplicate Bridge is that it’s a more complex game and there’s a wider community of people that play it,” Price said. “People are able to measure their performance against the country, because results are uploaded every week online.”

Siler teaches newcomers how to play and coaches Party Bridge players who are interested in moving up to Duplicate Bridge. “It takes some study, practice and the ability to visualize what the other three players at the table are holding,” Siler said. “There’s a lot of strategy. It’s a communications and team game. You are working with a partner. Your bids tell your partner something, and your partner’s bids tell you something.”

Besides expanding the variety of activities at the center, which is located in Winslow across the street from Waterfront Park, Price intends to invite even those who do not consider themselves seniors.

“There are negative connotations associated with the word senior,” he said. “I tell people, if you take your privileges to get a discount on the ferry, why not take them to enjoy activities at the senior center?” And, you don’t have to be 65 or older to participate in or enjoy the BISC community.

“One of the things we are working on here is to get people of a variety of ages to interact,” Price said. “Our proviso is 50-plus, and the largest group is between ages 70 to 85. But we have people who are in their 60s who are active in bridge, bicycle trips and language classes.”

Named 2019 Chamber of Commerce Citizen of the Year, Price was chosen for his work at BISC and his efforts with other nonprofits to create ongoing collaborations. He said his vision of helping all seniors navigate the process of aging includes finding ways to make the center more vibrant and inclusive.

“I have been overwhelmed and overjoyed by the enthusiasm and energy that is going on here at the senior center,” Price said. “We have over the past two years doubled our membership. Bridge might be the reason you come to the center, and we hope it allows you to discover what the senior center is about making the most of the third chapter of your life.” biseniorcenter.org 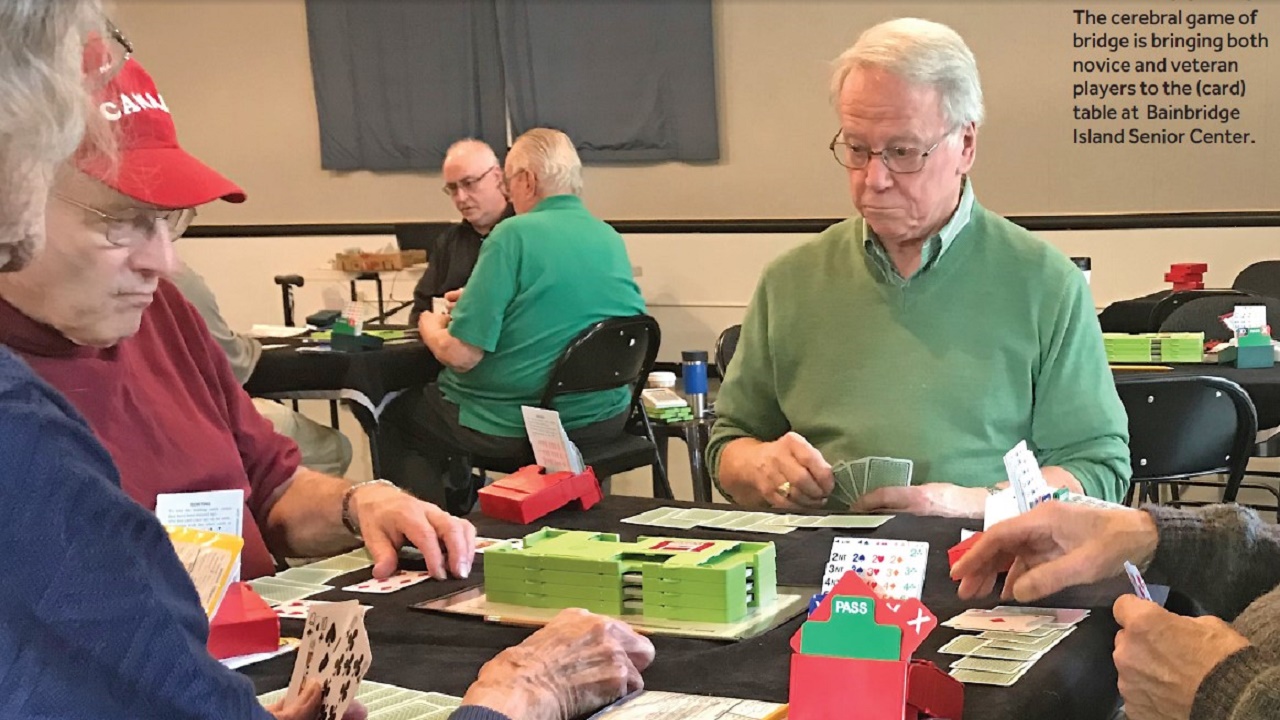 Why Does It Take Two Years to Paint the Agate Pass Bridge?