From island moms to the rotary auction, opportunities to repurpose “stuff” are familiar to most islanders. In those examples, we may make a few bucks or at least get a charitable donation tax receipt. But what if we could easily come together to give just for the sake of giving? The Facebook group Buy Nothing Bainbridge (or BNB) allows us to do just that, building a gift economy while at the same time building connections with neighbors.

Founded through the environmentalism and generosity of islanders Rebecca Rockefeller and Liesl Clark, the group has grown to more than 1,800 members since launching over the summer. There is no currency or bartering involved. In fact, those practices are not allowed. It’s all about giving—with no strings attached.

Hundreds of items to give away as well as requests for items needed are posted on BNB every week, some outlandish, some practical, some playful and some very serious. The hot items are snapped up, or at least requested, in seconds, with competition as fierce as the real estate market during the housing bubble. Surplus garden goodies, such as apples and kale, are regularly offered, as is the occasional ride to Portland or tickets to a show in Seattle.

Even sports fans are getting in on the action. On the opening day of football season, a commemorative Seahawks gold coin and miniature Seahawks helmet, signed by Seahawk Marcus Trufant, were posted for giveaway. Within an hour, dozens of BNBers were clamoring for the Seahawks swag. Jeff Wenker, an avid BNB member and owner of the treasures, deliberated on BNB as to how he was going to choose the receiver. (Givers decide themselves how a recipient is selected—first come-first served, random drawing, preference to teachers, and best haiku wins have all been methods used.) Wenker posted that he would be “determining the worthy recipient based on a complex algorithm involving demonstrable, clearly articulated and creatively delivered evidence of true Seahawks fandom.”

Invite creativity on Bainbridge and it will come! Within minutes, people were displaying photos of their impish offspring in Seahawks jerseys and recounting sad stories about how a friend going through hard times would be cheered by the items. In the end, Wenker resorted to a traditional name drawing, using the helmet itself to hold the names of potential takers. The winner, Holly Rohrbacher, was a classmate of Trufant’s at WSU.

When another BNB enthusiast, Debbie Dubeck, realized that her son’s combination foosball/pool table had been sitting idle in the garage for nine months, she asked 10-year-old Joey whether another child might get more use out of it. After a few minutes of heartfelt contemplation, Joey agreed with his mom. That night, Debbie posted the game on BNB. She asked Joey to randomly choose a number from one to 29 (the number of requests on BNB). Joey picked 15, which turned out to be a friend’s family. Debbie reported that Joey got the feeling of gifting bliss that so many BNB members do, knowing that his toy would be thoroughly enjoyed by the Kenney family kids, twins Elizabeth and Grace and their brother, Andrew.

There’s a bounty of benevolence on BNB. One member collected cell phones for women escaping abusive relationships. Another led a crusade for the acquisition of housing, furnishings and toys for a family moving to the island with an ill child. One member even had her car repairs anonymously paid for because other BNBers recognized how much she gives on BNB and wanted to give back.

“Live” giving events have also popped up. BNB hosted a table at the Lynwood Center Sunday market with goods free for the taking. BNB fashionistas took part in a clothing giveaway that rivaled the dressing room at Loehmann’s. And BNB hosted a book giveaway at the Bainbridge Island Brewing Company, where attendees brought and took literature while sipping hoppy concoctions.

The concept of BNB took off with such zeal that by October, Rockefeller and Clark had helped at least 17 other towns form Buy Nothing communities. Rockefeller believes that ideas like BNB are what will keep our society from being buried in waste and will foster a more caring spirit between residents. So far, it has restocked wardrobes, freed up abundant storage space and fed many Bainbridge residents, body and soul.

To become a member of the Facebook group Buy Nothing Bainbridge, simply ask to be invited (BNB is a closed group). 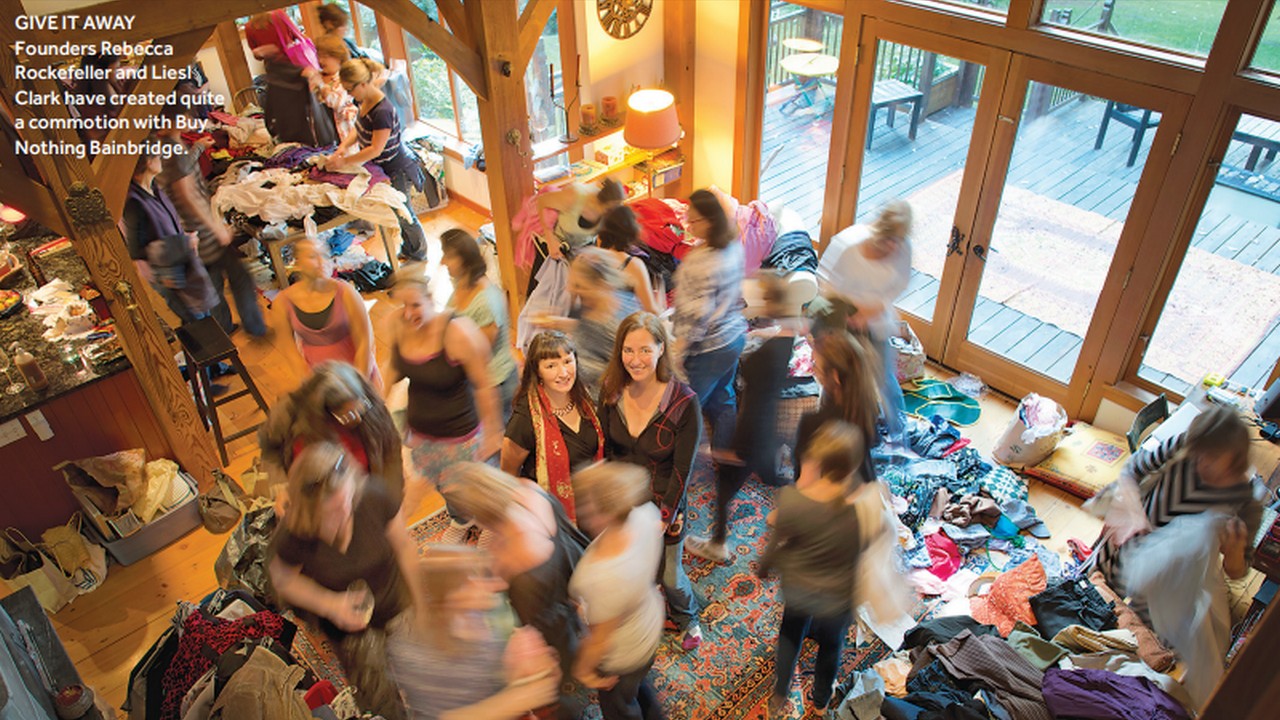 The Comeback // Kate Goldston Walks the Road to Recovery