The Comeback // Kate Goldston Walks the Road to Recovery

Finding herself in a hospice ward on her 33rd birthday, Kate Goldston knew she had to do something fast. At 5 foot 9 and a mere 71 pounds, Goldston looked nightmarishly gaunt. After two decades of anorexia, her body was shutting down. But something snapped inside her that day. “I felt like I woke up from a 21-year coma,” she said. With that, her journey to recovery began. Returning to her apartment on the island, she embarked on the complicated “refeeding” process. With minimal medical or psychiatric help, she turned the spotlight of her obsessive-compulsive brain toward recovery.

In those first few critical weeks she felt alone and depressed. A friend suggested she turn to the popular Facebook group “Buy Nothing Bainbridge,” a freecycle site for posting things to give away or items sought. Goldston’s “ask” was a bit unusual: Kate Goldston > Buy Nothing Bainbridge Weird request. Will someone play Scrabble with me? Love to play but all alone. Don’t worry, not a weirdo. Delightful. The response was tremendous. “Within three hours I had 90 offers,” she recalled. A month later, she posted again: Kate Goldston > Buy Nothing Bainbridge Okay, here’s the story folks, I will try and make it short and sweet. I am in recovery from a 21-year battle with anorexia.

Beyond the mental battle is the physical one. I am restoring a massive amount of weight—about 60-65 pounds. What I am searching for is clothes. I am 5′ 9” and athletic but do like to look nice. If anyone has any clothes between size 0 and size 8 that they would be willing to part with, they would be put to good use. Again, a tidal wave of response. “I have more clothes than I will ever need in my life—and nice clothes!” Goldston said with a smile. Bit by bit, she shared her progress online and readers wrote back—commiserating, encouraging, cheering. Now she had Scrabble buddies, she had gardening companions, she began to tutor a new friend’s daughter in math, she was invited on picnics, she even adopted a kitten. Her circle of friends grew exponentially.

“When you put your problem out there, people are willing to engage you,” Goldston said. “Doing this publicly was not my first preference, but I do believe it is what saved me.” And not only was Goldston virtually “out there,” she was literally “out there”—in Winslow—walking the same route, every day, rain or shine, five to seven hours a day. At her weakest point, she was doing her circuit with the aid of a walker. Of course walking is tied to her illness—the compulsive urge to be thinner—but also, strangely, it was a part of her recovery. It became a way for her to be visible to the community while making the transition from child-body to woman-body again, but this time on her own terms.

When she was 10 years old that wasn’t the case. The first of her classmates at Wilkes Elementary to reach puberty, she grew one foot in a single year. “In fifth grade I went from 72 pounds to 152 pound. I had size double-D breasts.” Her body had abruptly forced her into womanhood even though she was, in heart and mind, a child. This, combined with cruel comments from girls at school and unwelcome attention from men, made her want to disappear. So she set out to do that very thing by methodically starving herself.

Walking Winslow has helped her adjust to being seen again. Any setbacks were more than eclipsed by the countless people who gave her the thumbs up, who pulled their cars over to offer a kind word, who honked and waved their support. And now, the obsessive walking has tapered off. She doesn’t own a car so she simply walks to get her chores done: school, yoga, shopping. A priority at this moment is repairing her relationship with her family. “I have tons of friends now but all I want to do is hang out with my parents. The powerful look of recognition in their eyes is the most valuable thing I have received in this process. I am back and more alive than ever,” Goldston said. 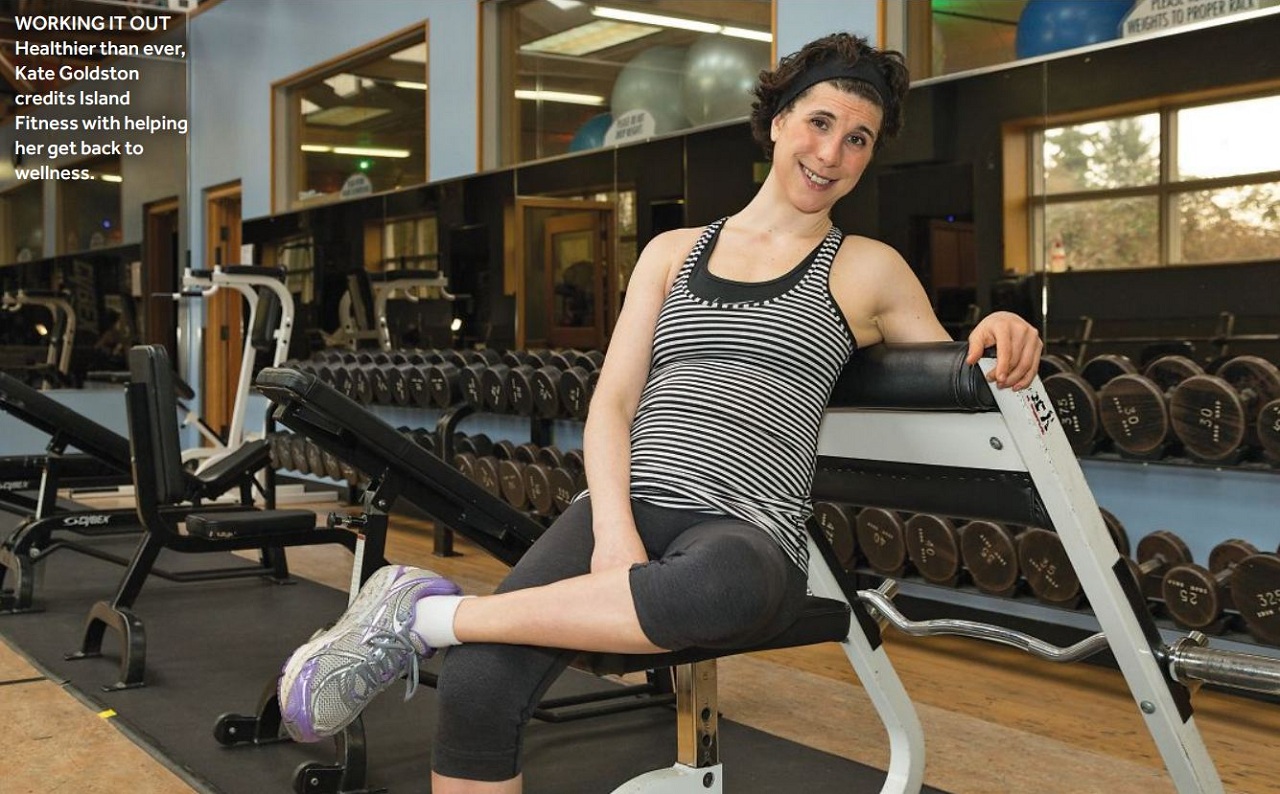