How many Bainbridge Islanders does it take to stuff and sort 13,000 envelopes in less than an hour?

“Usually 100 to 150,” said Tracey Denlinger, executive director for One Call for All, the local organization focused on making giving easier for donors and fundraising simpler for local nonprofits. Each October the Filipino American Hall is abuzz with their energy.

Old friends hug and soon-tobe friends shake hands for the first time. Many come donned in seasonally appropriate Seahawks attire. Those who’ve arrived early enough to wedge their way into the assembly line are busy at work, while some latecomers complain there isn’t enough to do.

The idea behind One Call is simple. Instead of filling out, say, 10 separate forms to donate to your favorite organizations, you fill out just one. And instead of nonprofits spending valuable time and energy fundraising, they can concentrate more on what they do best from caring for our forests, to promoting the arts, to providing lower cost housing to folks who otherwise couldn’t live on the island.

In 1960, long before One Call’s current structure, a group of islanders (then called the Bainbridge Foundation) began an official organized effort to solicit funds on behalf of island nonprofits. Neighborhoods were divided up among board members, who then canvassed their assigned areas, collecting cash and keeping track on a handwritten ledger of where to allocate the money.

Today, donors respond to One Call’s signature Red Envelope campaign with a check, cash or an online payment and are able to select which organizations to direct their donations to. This year there are 125 nonprofits altogether including seven newcomers.

One Call covers the credit card and PayPal fees for the donations and accepts gifts of stock or appreciated assets as well as distributions from individual retirement accounts. Last year, with a budget of less than $100,000, it raised a total of $1.5 million for its partner organizations.

But for Denlinger, the number of distinct donations received is as interesting as the total amount of money raised. Among the eligible nonprofits, there is also a community fund that supports all the organizations. The fund functions democratically, with each separate donation that gets specified for a particular nonprofit counting as a vote.

The total money in the fund is then divided up proportionally among organizations according to the number of individual donations or “votes” it received within the main campaign.

On average, donors choose seven to nine nonprofits, with some giving to only one and others giving to them all. Denlinger called completed donation forms “a window into someone’s heart.” She has seen returned forms covered in eraser marks, a testament to the amount of time and thought put into deciding where and how much to give.

The intertwined roots of Bainbridge nonprofits may get confusing, but they also provide the groundwork for what Jim Hopper of the Bainbridge Community Foundation aptly calls an ecosystem of island organizations. Nonprofits work to hold one another up, recognizing that they share the responsibility of building a stronger community.

The Rotary Club has provided grants to One Call, and One Call, in turn, has included Rotary among its partner organizations this year. Denlinger’s office is located in the Marge Williams Center, which provides low-cost office space and meeting rooms for nonprofits and also receives donations through One Call.

Well-known nonprofits garner a significant portion of their annual budget from One Call donations. For example, Helpline House receives 12% and Raising Resilience receives 18%. But because of One Call’s work, smaller nonprofits get the chance to make a name for themselves too.

“There are so many small agencies that wouldn’t exist if it wasn’t for One Call,” said Bruce Weiland, a former board member. “We’re like a nonprofit incubator in this little tiny community. I think One Call is the classic symbol of what is good about Bainbridge Island. It’s passionate, it’s longstanding, it’s widely subscribed to.”

This year’s envelope stuffing party will take place on October 4, officially kicking off the annual Red Envelope campaign. Its fundraising theme is “each one plus one” in hopes that donors will give to the organizations they would normally, and then add another that grabs their attention.

“We are trying to encourage folks to broaden their philanthropy,” Denlinger said. “Whenever any organization is doing better, all organizations benefit.” 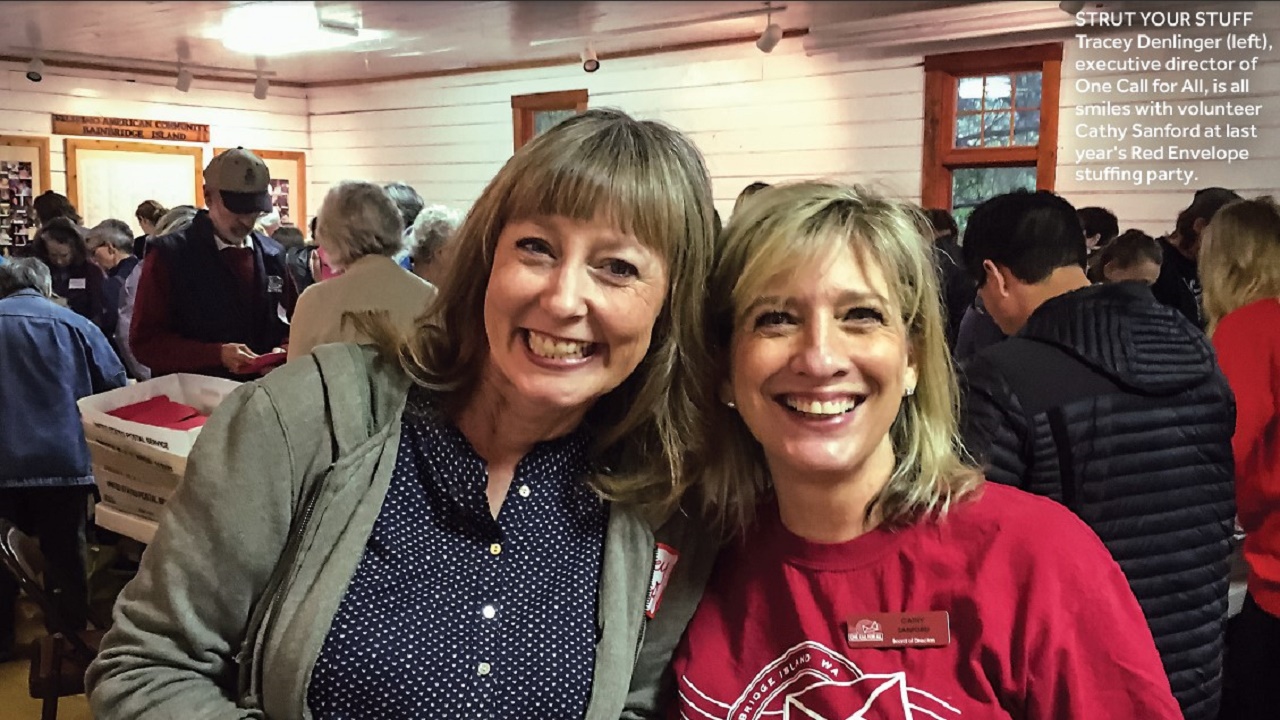 How Many Nonprofits Are on Bainbridge Island?