What a Long, Strange Trip // Rocker Finds Kinship With a Russian Aesthete

When Former Seattle grunge musician and antique dealer David Bond keyed “Russian avant-garde” into eBay in 2012, he never imagined where the late-night query would lead. He set in motion a newborn fascination with a little-studied early 20th-century Russian artist and the discovery of a potentially priceless painting. Among the search results that night was a roughly 20-by-24-inch oil painting with two sides. On its first side was an abstract, a strangely primitive depiction of elongated worshipers gathered around a holy woman. The reverse side was completely different—a Cézanne-esque portrait of a seated man, likely Karl Marx. The contrasting styles of the two sides as well as the portrait’s subject piqued Bond’s curiosity. He purchased it for around $150.

When the artwork arrived, Bond, who worked for years as an art appraiser for an East Coast auction house, was struck by inconsistencies with the artist’s signature. It didn’t match the other paint colors used, nor was it congruous with the natural aging process of the painting. Over time, paint layers begin to polymerize, essentially melding into each other. The signature hadn’t started to blend with the other layers—as it would have had it been anywhere near the same age as the painting—suggesting it had been added later.

Suspecting the signature was false and did not represent the true painter of the work, Bond researched Russian avant-garde artists. He eventually concluded that Natalia Sergeevna Gontcharova (1881-1962) was the probable painter. Classically trained in the early 1900s at the Moscow Institute of Painting, Sculpture and Architecture, Gontcharova spanned the post-impressionist and abstract eras and was influential in developing Cubo-futurism, which bridged the two art movements.

She and her partner, Mikhail Larionov, are credited with creating rayonism, a linear dynamic form of abstract painting that attempted to depict the intersecting space, or “rays,” between objects and people. The significance of her original art form—rayonism’s focus on “the space between” and what it ultimately represents—is not lost on Bond, who feels her message was designed to transcend the ages. “Gontcharova had an amazing ability to walk between abstract and figurative in one painting,” said Bond. “It’s what makes her so interesting and important.”

Drawn to Gontcharova’s spirituality and fluidity of style—and her boundless modes of expression (she also designed costumes and sets for Sergei Diaghilev’s Ballets Russes)—Bond identifies with her refusal to commit to one creative endeavor to the exclusion of another. Born in Philadelphia to an artistic family, Bond aspired to be a painter in his own right, studying at Cornish College of the Arts in Seattle in the late 1980s. Also a musician, he played guitar in numerous bands, living the rock star dream in the early ’90s with the Seattle grunge band Gnome, which opened for icons like Soundgarden. Returning to Philadelphia, he reconnected with visual art, working first for Freeman’s auction house and then as an art dealer and salon and gallery owner for 17 years, before moving back to the Pacific Northwest.

Working mainly through a Lithuanian art picker (someone who finds and flips art), Bond has accumulated nearly 100 works he believes to have been produced by Gontcharova. The collection, which includes wooden religious icons, showcases her tremendous versatility and power as an artist. Only recently has Gontcharova’s stock value climbed. In 2009, her oil painting “Picking Apples” (circa 1909) sold in London at Christie’s for a record $9.8 million, at the time making her the priciest female artist at auction.

Although Gontcharova was highly prolific, her work is hard to verify, even by experts. She rarely signed her art (hence why it was possible for Bond’s first Gontcharova painting to bear the signature of someone else) and when she did, she utilized various signatures using her combined initials in Cyrillic, as well as N. Gontcharova in Latin letters. While Bond’s collection, named “Beauty in the Fourth Dimension,” has yet to be seen by anyone of prominence in the Russian avant-garde field, there are significant indicators suggesting much, if not all, of the work is hers.

If indeed Gontcharova is the artist, the fact that an independent collector amassed such an array of her work is significant for both scholars and collectors. As excitement around the collection grows, Bond has partnered with fellow islanders Stefan Goldby and Cortney Wollaston, manager of Rolling Bay Hall, to assert the provenance of the artwork and showcase the versatility of one of the most influential female artists of the 20th century. 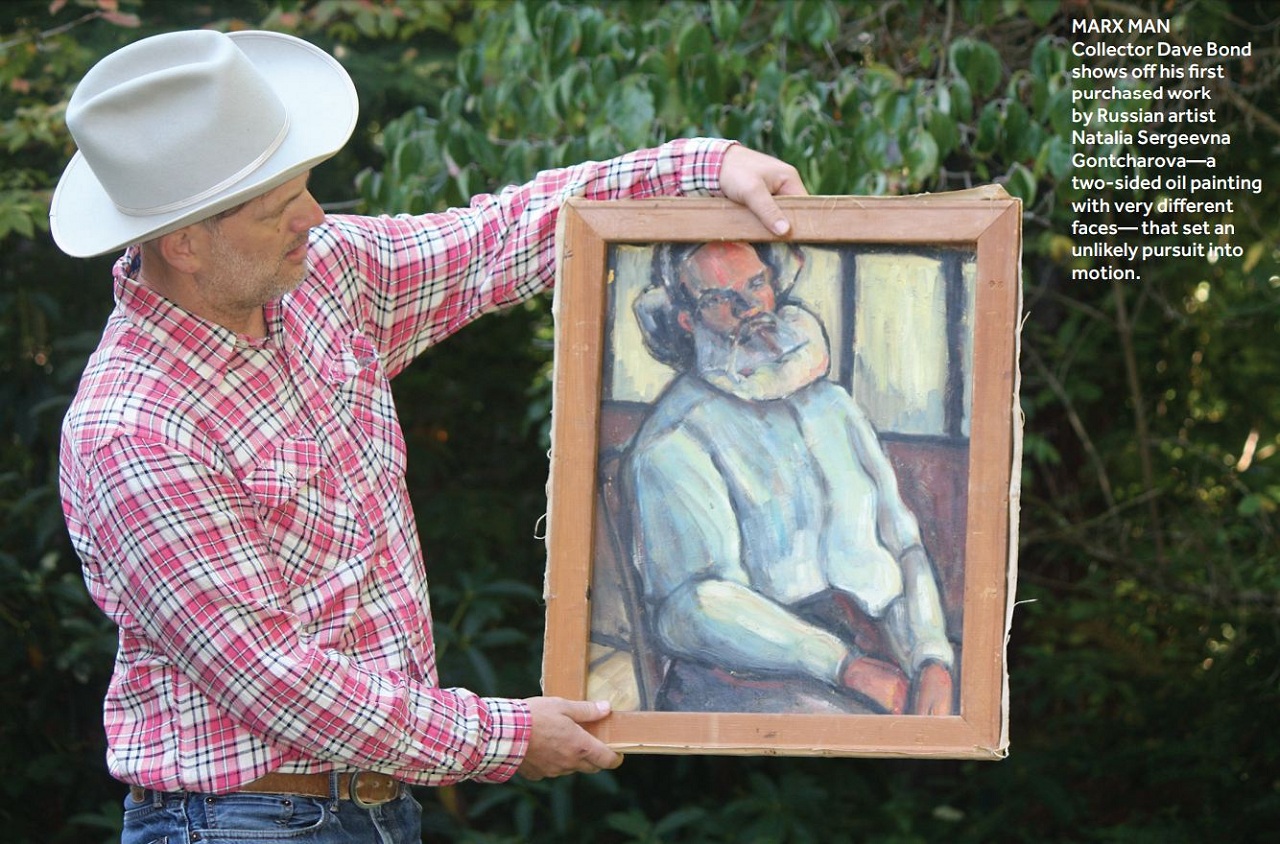 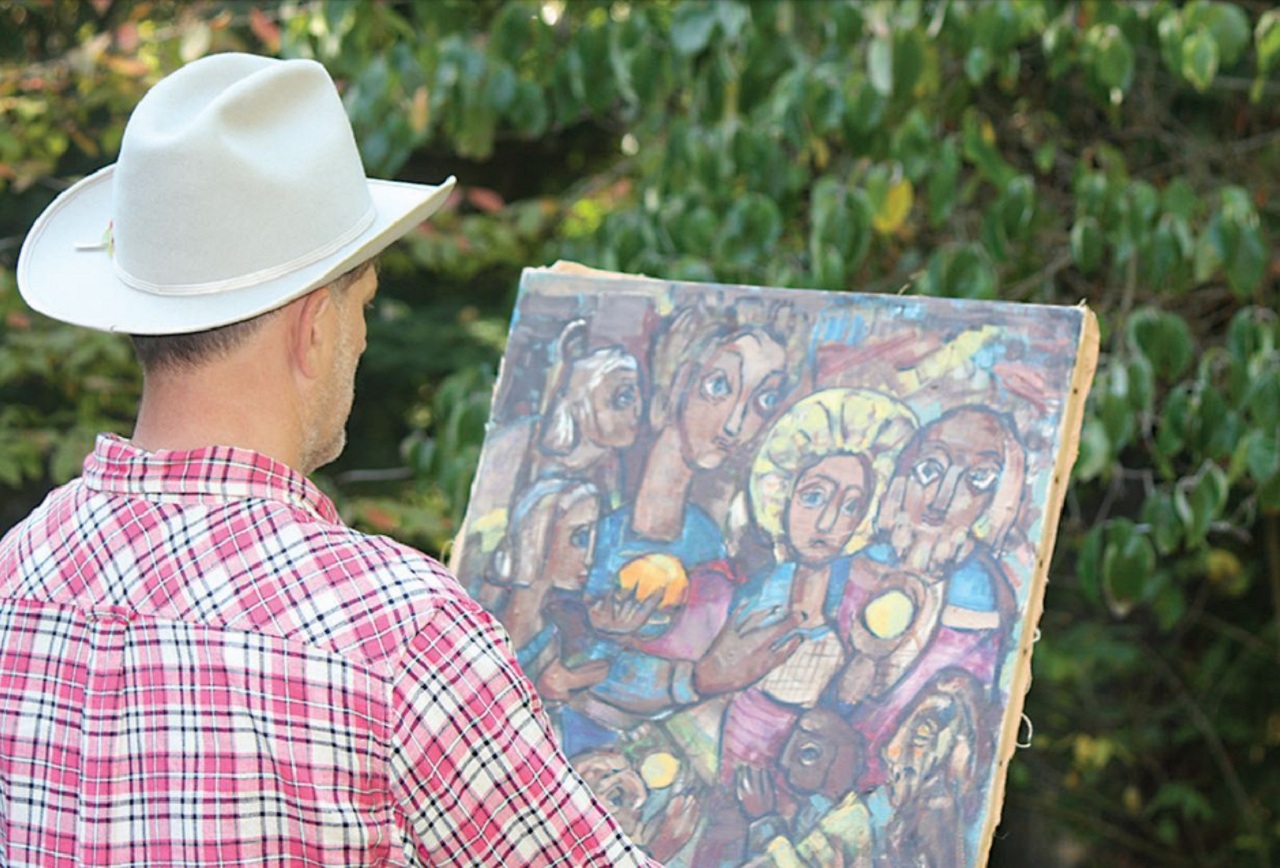 In From the Cold // Camp Siberia Springs Anew in Kitezh