The Bainbridge Island Rotary Auction is practically its own ecosystem, a pop-up community where hundreds of people work harmoniously for an end result that is far greater than the sum of its parts. And, oh boy, are there parts. Try 150,000 donated items dropped off by over 4,000 cars for an event that lasts six hours and raises more than a half-million dollars.

Exactly how it all happens is not really at issue for Tom Lindsley, the 2017 auction chair. He prefers to lean into the mystery. “The secret of being a good chair is to let the departments do their own thing,” he said. That the annual event raises funds that Rotary distributes to local and global nonprofits seems more to the point, the proceeds returning to the community in the form of grants with cumulative donations over its 57 years totaling $7 million.

Nearly every islander has a story about the auction. Susie Burdick, Rotary president, is among them. When her son was born she furnished his nursery with Rotary finds. Now that her little boy is 33, she mused, “The Rotary Auction is part of our lives. We all have some connection with it.” She’s worked the auction for the last five years and her favorite story is the one about the urn with ashes that showed up, raising eyebrows until the owner returned reassuring everyone that the remains were of a cremated dog.

About 10 years ago, Lindsley spotted an Eames lounge chair that came in with a broken ottoman. “Rose plywood and perfect leather,” he recalled. He ordered the replacement part but by the time it was repaired, the auction was over. The chair resided in a Rotarian’s living room until the following year when it sold for about $800, a steal in Lindsley’s opinion.

In 2012, Art Whitson, percussionist with the Bainbridge Symphony Orchestra, noticed what looked like a small upright piano. When he removed its back panel, however, it revealed the distinctive mechanism of the rare and expensive celesta. Whitson alerted the auction chair and Rotary promptly donated the instrument to the orchestra.

And last year, a monochrome painting by Chiura Obata turned up in the fine arts department. Greg Brown, a professional art appraiser and annual volunteer, determined that it was created while Obata, a UC Berkeley art professor, was being held at an internment camp during World War II. Rotary sidelined the piece. Roby King galleries is donating restoration services and Rotary plans to give it to a museum that will appreciate its significance.

There’s an altruistic impulse at work here that you won’t find at your average rummage sale. Peggy Stephens agrees. She’s witnessed many random acts of kindness while managing the volunteer registration desk for the last three years. She and co-chair Renee Jorgensen deploy over 1,400 volunteers to departments like marine supplies and boats, jewelry and computers. They also direct people to the café, which provides free sit-down meals each day, one of the many perks of volunteering.

Like most things at the Rotary Auction, the food is over the top. Credit Stephen Hung, who has been the behind-the-scenes chef for the last four years. With a team of helpers, he assembles 7,500 meals from scratch during the days preceding the event. In spite of his school cafeteria kitchen, he’s been able to serve prime rib and baked potatoes, Sunday brunch, a salmon dinner, homemade soups and a locally sourced salad bar.

The event also reflects Bainbridge evolving values. As the island has become increasingly green-conscious, so has the auction. Many point with pride to the huge changes in philosophy that have occurred in just the last 10 years thanks to the Green Team, a band of eco-minded volunteers headed up by Sarah Albee.

One such innovation is the LOO (or lawn of opportunity) where some of Rotary’s quirkiest donations end up, free for the taking. Katy Bigelow, a LOO helper, said she’s witnessed “dentures, pesticides and kids’ art projects,” on the lawn. She wishes people were more mindful about “donating stuff that can actually help Rotary,” but the LOO exists to give these items another chance, whereas 10 years ago they would have gone straight to the dumpster.

The Green Team has also designated regional “harvester” charities. Organizations like Bicycles for Humanity and Books to Prisoners swoop in after the auction closes and are allowed to take as much as they can haul for the benefit of their organizations.

The day after the sale, Bainbridge Disposal rolls in. Owner Heather Church is another long-time supporter. She has been helping at the auction since the ’70s when she and her father, a Rotarian, helped make shortcake with local strawberries. These days she sends 13 trucks and 20 employees to do the final cleanup with the Green Team on hand to sort out anything recyclable.

Raising more than $500,000 in six hours is pretty spectacular. Equally amazing is the collaborative spirit that makes it all happen, not to mention the philanthropic ripple effect that extends around the globe. Lindsley said that the Auction is successful “because the community gets involved and takes ownership. The Rotary Club is doing well just hanging onto the tail.” 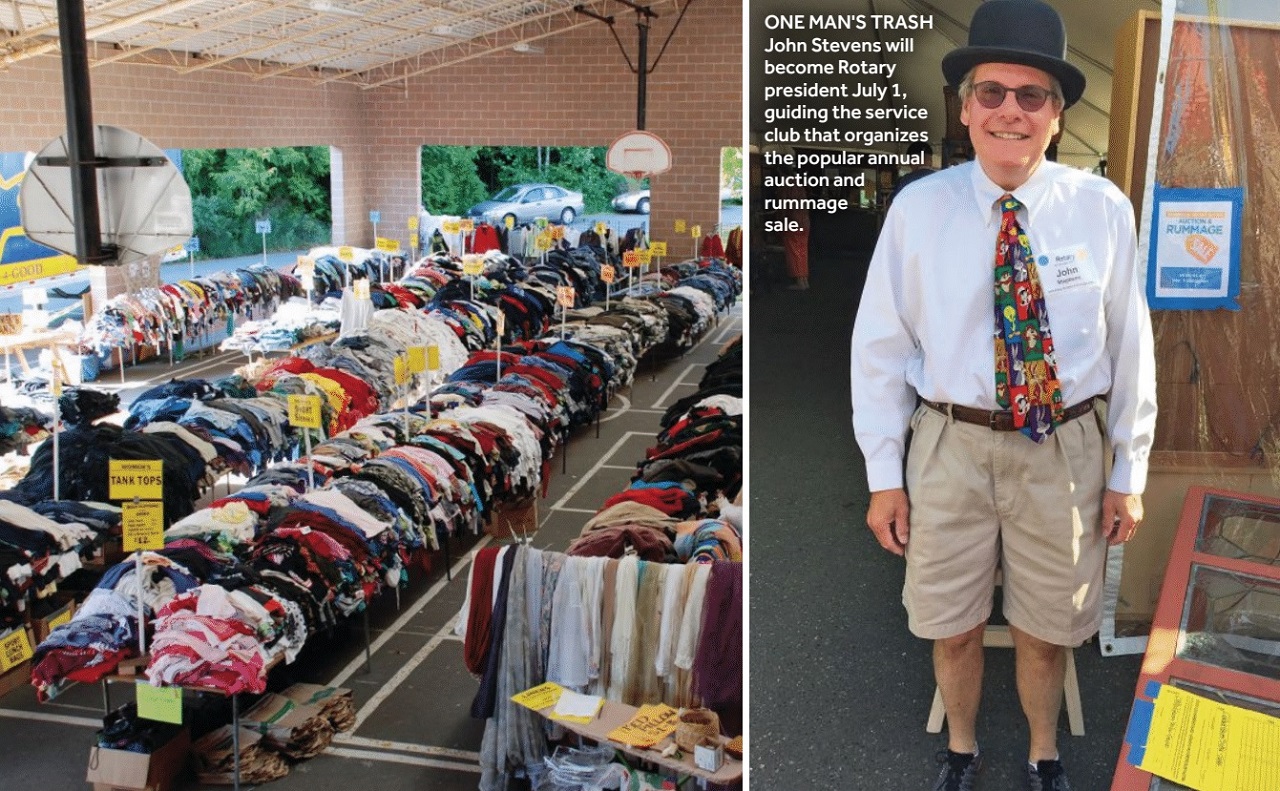