Get top grades! Excel at advanced courses! Aim for an elite university!

Under that kind of pressure, being a kid can be tough. And a big source of the angst might be the very people who love them the most, their parents. In a quest to help children succeed, parents sometimes unwittingly send the wrong messages about what’s important. And by shielding kids from difficult or unpleasant situations, parents leave children vulnerable when it’s time to stand on their own. How to cope—and help children cope? To the rescue: Raising Resilience. This Bainbridge Island nonprofit is at the forefront nationwide in helping parents bring up self-sufficient, healthy and happy adults.

Its primary goals are connecting families, providing resources and offering parent education to help families thrive, said Julie Miller, the chair of the organization’s board of directors. Sometimes it’s tough for parents to acknowledge that they’re adrift or to know where to turn for advice and help, said Karolynn Flynn, a Raising Resilience board member and the program committee chair. Flynn, who has a background in cognitive studies, child development and teacher training, noted that discovering that other parents also are struggling can be a relief.

“We all have times when our children fall apart and we need someone to lean on,” said Flynn. “We’re not meant to do anything on our own. We are our best selves when we connect with others and let ourselves be vulnerable enough to ask someone for help.” A parent’s top job is to raise a child who can fly, said parent Tina Pujolar, who just completed her term on the Raising Resilience board. Sometimes that means resisting the urge to step between your child and disappointment, frustration or hurt. You do not want to raise a delicate “teacup” that might crack under strain, Pujolar said. “You want a lotus flower to break through the mud.”

Raising Resilience spun out of the former Just Know Coalition and has been offering programs since 2003. In the beginning, the primary focus was parents of high-school students. “We’ve worked diligently to add to that,” Miller said. The group now provides programs for parents of teens and tweens, as well as elementary and preschool children. Often, Raising Resilience partners with other organizations that support similar goals, including the public schools, parent-teacher groups, Bainbridge Healthy Youth Alliance, Kids Discovery Museum, Peacock Family Center and area preschools. “I am so deeply respectful of how difficult it is to be a parent and how we all really need each other,” said Dr. Cezanne Allen, board secretary, who also works with Bainbridge Healthy Youth Alliance.

Raising Resilience relies on surveys to determine what to offer, Miller said. “We regularly ask the community, ‘What are your needs, what are your interests?’” Surveys revealed that some young people felt their parents chiefly valued academic successes. One child said: “All I am is grades.” Another said that when parents brag about school achievements, it feels like the child is just part of an investment portfolio. Well, as parents know, children are the ultimate investment in the future. Correctly communicating that sometimes can be tricky, and that’s where Raising Resilience aims to help with programs such as its Beyond the Report Card campaign. It’s helpful to remember that academics are only part of who your child is and will someday be, Pujolar said. “Instilling good character traits in your kids is better than any math score. Acknowledging that just takes away all the pressure. It was the best gift that Raising Resilience gave me as a parent.”

The academic trap can start as early as kindergarten, noted Pujolar, a former teacher. If a kindergartener tests below the “top” reading group, for example, her parents might hesitate to reveal that to peers. Raising Resilience provides a way for parents to share concerns and support, she said. Surveys also showed that managing technology’s imprint and influence on kids is a top concern for many island parents. So Raising Resilience offered the documentary “Screenagers: Growing Up in the Digital Age” in May at Bainbridge Cinemas. When the event sold out, the group added a showing. Because the second show also sold out, Raising Resilience scheduled a third viewing in October.

Despite sometimes sullen or cranky behavior, most teens and tweens look up to their parents, so model good tech behavior, Flynn urged. Put down your cell phone. Resist filling time by playing games or constantly checking social media. “Parents go first,” she said, and children will follow. The group’s most successful event to date was a visit in February by Julie Lythcott-Haims, author of How to Raise an Adult: Break Free of the Overparenting Trap and Prepare Your Kid for Success. The sold-out event at the Bainbridge High School Commons “really got things bubbling,” Flynn said.

Since her book’s publication in June 2015, Lythcott-Haims has traveled all over the country and “no community has impressed me more” than Bainbridge Island, she said in an email interview. “Your approach to raising kids is grounded in both research and values, and is designed and implemented with a wraparound approach that taps the expertise of the community as a whole.” That Raising Resilience emerged and is flourishing on Bainbridge Island is no accident, Allen said. “We have perceptive parents—that we can’t take for granted. Parents here really care deeply about kids.” Miller and Flynn also credit the island’s high volunteer rate for making people feel invested in what happens with youngsters. “Here, people make a conscious choice to engage with their community,” Miller said.

Many parents have a gut feeling “that over parenting isn’t quite right—it’s busy-making, stressful, and doesn’t feel like the childhood we remember—yet we’re under a good deal of peer pressure to behave the way it seems everyone else is,” said author Lythcott-Haims, a former dean of freshmen and undergraduate advising at Stanford University. “This is why getting parents together is crucial. Many of us are afraid to be the first to step back, let alone opt out completely, but we’re eager to join a group of other parents who are willing to talk about it. We share the same love of our children and, often, the same fears. Collectively, we can be strong.”

Flynn said it’s clear that there is “a growing evolution of hearts, minds, brains that belongs in the hands of parents and the community.” But for the work to continue, the community must stay engaged, she said. Toward that end, the group scheduled a talk in November by educational psychologist Michele Borba, author of Unselfie: Why Empathetic Kids Succeed in Our All-About-Me World. Other programs are in the works and will be highlighted on Raising Resilience’s website and Facebook page. For Miller, Allen and Flynn, the reward is in knowing that a growing cadre of island parents has somewhere to turn for help. “They don’t have to feel alone, because they aren’t alone,” Flynn said. 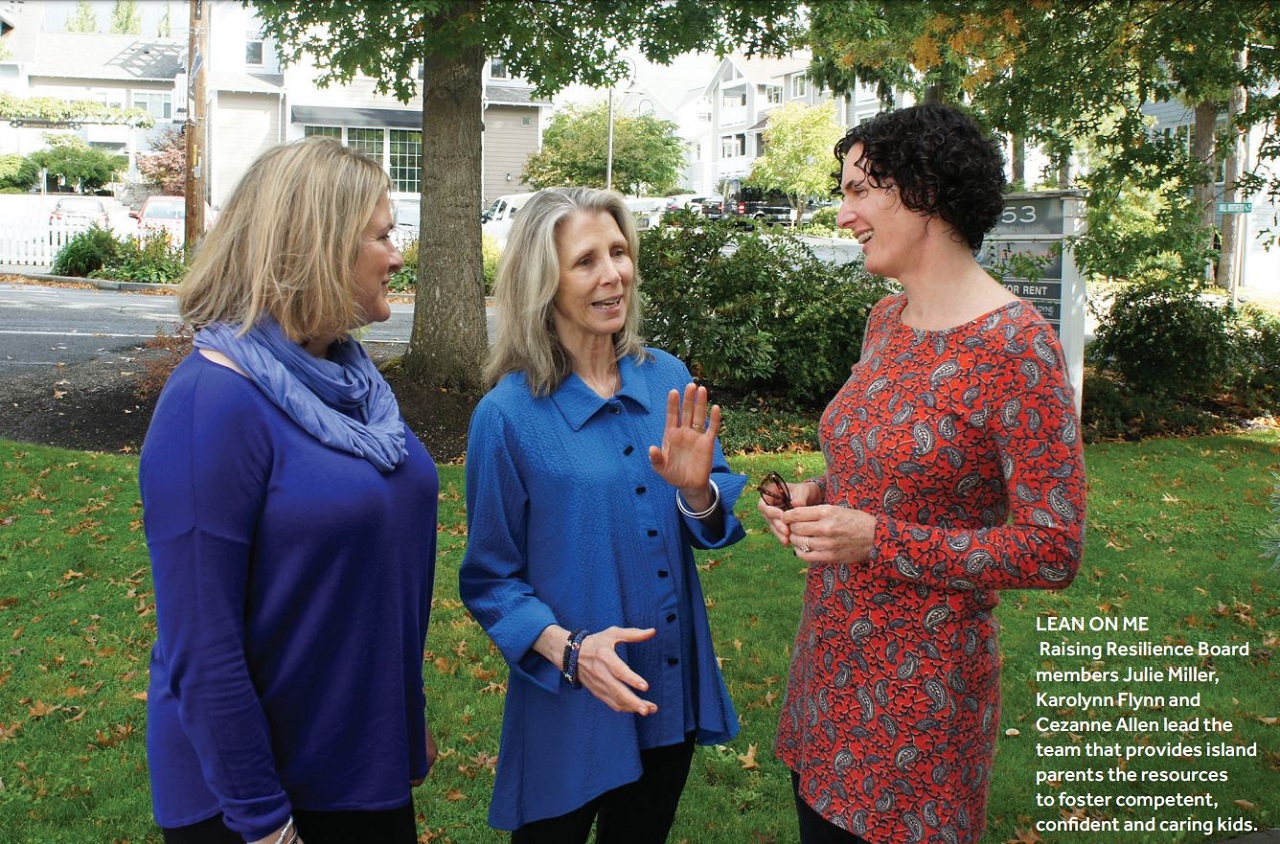