It was a typical PTO meeting—parents sitting elbow-to-elbow around the staff break-room table, coffee in mugs, cookies within arm’s reach.

Woodward Middle School Principal Mike Florian had just given an overview of Bainbridge Island School District’s most recent undertaking, a social-emotional health initiative, when a parent tentatively raised her hand.

“We are new this year,” said Jen Roman, referring to her seventh and eighth graders. “It’s been hard and stressful to make friends.” Then another parent chimed in, “We are also new. Does my son want to come to school? No.”

Suddenly many were commiserating and sharing their own stories of lunchroom isolation, intimidation by peers and morning dread of the school day. Of their own accord, the parents in the room had quickly illustrated the impetus of BISD’s new initiative premised on the idea that when kids are experiencing stress and anxiety at school, academic performance is practically beside the point.

That impetus came out of last year’s Listening Tour by then-new Superintendent Peter Bang-Knudsen. Recalling the dialogue in his meetings with hundreds of parents, students and staff members, he said, “I wasn’t shocked but I was surprised by how broad and deep the social and emotional concerns were.”

Propelled by the community’s feedback and by the growing body of research on the subject, as well as newly issued state standards, his office took action. The Bainbridge Schools Foundation stepped forward with a funding commitment to “embed an expert,” as executive director Mairead Shutt put it. With guidance from community organizations Bainbridge Youth Services, the Bainbridge Healthy Youth Alliance and Raising Resilience, the district landed on Clay Roberts as the catalyst for the change they wanted to see.

Roberts who lives on Bainbridge, where he and wife Sherry raised their two girls, now adults with their own families—is internationally known for his work on social-emotional health. He has developed an array of programs for schools, most notably the Natural Helpers program that trains students to advocate for troubled peers.

But Roberts had an epiphany when he observed his programs’ implementation. “Things that really made a difference had very little to do with our program and everything to do with who delivered it.”

In response, Roberts shifted his emphasis from program developer to staff developer, an insight that informed his approach to empowering educators. He tells them, “It’s already happening; you’ve been doing this for a long time. It’s simply about being more intentional and deliberate and making little shifts in behavior that will take us to a higher plane.”

To illustrate the idea, he recalled his seventh grade social studies teacher who took him aside and said, “I’ve seen your IQ test. You’re really bright but you’re not working up to your potential. I’m going to expect more of you than I expect of other students.”

That year he said he worked “incredibly hard.” Years later it occurred to him, “We never took IQ tests.” But  it didn’t really matter—a trusted adult had taken an interest in him and he rose to meet her high expectations. Laughing, he said, “I wonder how many kids she told the same thing?”

In that vein, he asks teachers and administrators to cultivate relationships with children. “Some will take you up on it and others will not,” he said. “Don’t be fooled by the fact that some kids aren’t buying, it’s your job to keep trying.” Over time, he maintains, that trust will be established, at which point it’s time to leverage the relationship: “That’s when you challenge them.”

The ultimate goal is to counterbalance any existing or potential adverse childhood experiences negatives that range in intensity from being the new kid to major upheavals like divorce, a death in the family or a parent with a substance abuse problem.

With the help of educators and the greater community, Roberts hopes to “build assets in the lives of all children,” so when bad things happen, they have the capacity to weather those downturns.

“We’re defining this in health terms,” he continued. “However, when children are socially and emotionally healthy, it absolutely impacts their academic performance. This is a way to better ensure success for more kids.” 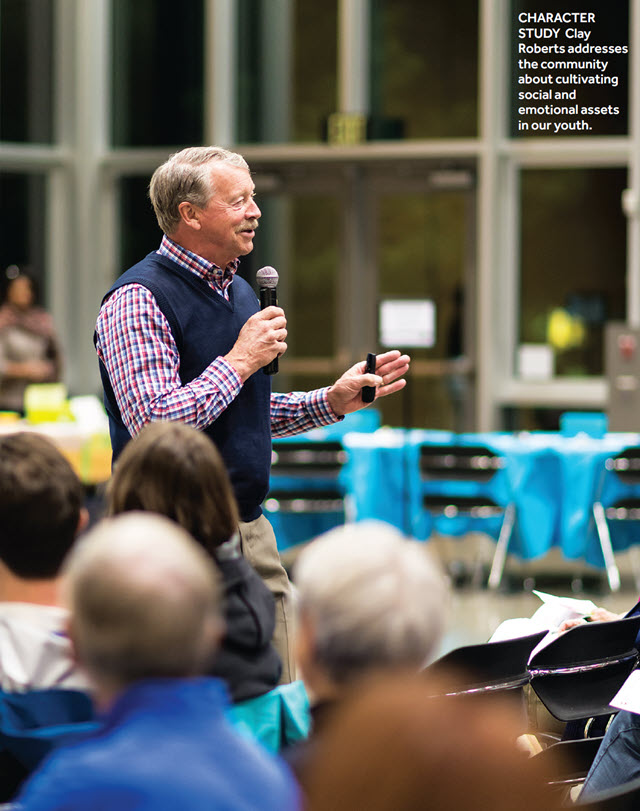