Chris Soldevilla is an actor, acting coach and a hilarious member of The EDGE Improv. Chris, his wife, actress Elizabeth Mitchell of “Lost” fame, and their son have lived on Bainbridge for six years. He begins filming the romantic comedy “A Love Like Ours” in July. You can find a schedule for The EDGE at bainbridgeperfomingarts.org and learn about Soldevilla’s new acting studio at chrissoldevilla.com.

Why Bainbridge Island instead of Los Angeles?

Bainbridge is beautiful. We have seasons, but being from Boston, I like to say it’s New England lite. The people are amazing. I had been in L.A. for ten years when our son was born. We didn’t want to raise him in L.A. I was burned out. It’s a whole town built on this industry so you can get caught up in the whirlpool of bitter, angry, frustrated actors. With the way technology is now, if someone wants to see me I can put something on tape or fly down.

How did you get started in improv?

I went to Boston University to study English and business. I took all the non-major theater classes I could get my hands on because I wanted to be an actor. A friend dragged me to an audition and that was that. I was in a troupe performing around the city. People like Paula Poundstone and Jerry Seinfeld opened for us.

How did your studio come about?

I taught in Seattle and found a lot of islanders were taking my class, so I decided to open a studio here. I teach improv and acting classes. Improv makes people push their boundaries. Actors get locked into how they think it should be done. Improv prepares you for going off script. The best stuff in acting happens between the lines. There is that bit of being uncomfortable because you don’t know what the line is going to be. I think that’s great because for a creative person, comfort is death.

How is it for Liz now that you’re more recognizable?

I was so used to being the purse holder, standing in the background while Liz signed autographs. Now we walk down the street together and I see that familiar look of recognition in someone’s eyes. Only instead of approaching Liz they’re saying, “You’re the guy from Improv!” And I’m like, “Yes! This is great!” We laugh. The community’s been so great to me.

Can you cry on cue?

I can now. I’ve learned to stay in the moment. To be the character and to trust in myself. The audience is right there—even if it’s on film or television—they are looking in your eyes. The performance has to be real.

Talk about your new movie.

It’s an independent film written and directed by my friend, Matt Berman. It’s a romantic comedy and a lot of fun. I’ll be working with Haylie Duff and Angie Everhart. Production begins in L.A. in July.

Vodka martini with extra olives. The olives are just something for me to eat until my food arrives. 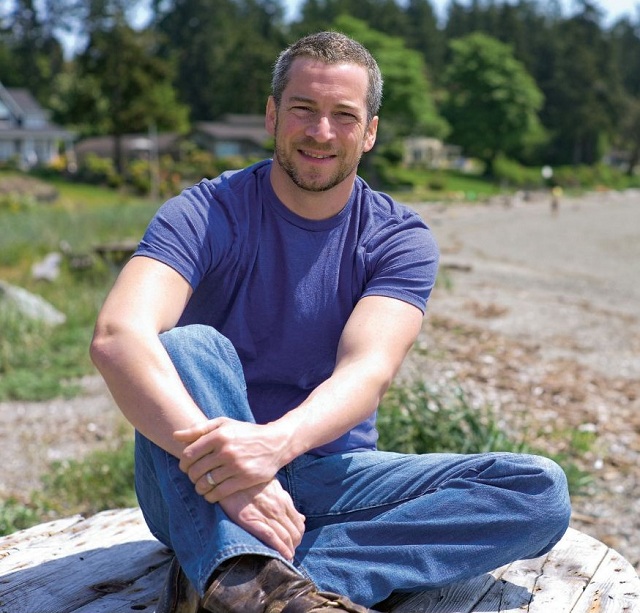