It’s all about cars. Except when it’s not. It’s “Clutch Radio” with Dan Rosenberg, a new weekly program dedicated to a conversation about all things automobiles and the people who drive them. In other words, almost everyone.

The unholy trinity of admitted geeks begins each show with an agenda of sorts, but like any good chat, things tend to take on a life of their own. The conversation can ultimately weave culture, politics and questions from callers into the mix. Each host brings his own flavor to the show, resulting in something every bit as funny as it is informative.

“The radio show is a natural evolution of the conversations we’ve been having, which was a big part of our motivation,” Rosenberg said. “It’s amazing how much passion there is around the subject, even from just islanders. We have the usual suspects like a previous editor of Road and Track but also inventors, a former pro athlete, even a movie producer.”

Rosenberg is an experienced buying-and-selling guru—he was co-founder of CashForCars.com/1-800-CAR-BUYER which sold in 2014 to Copart Inc. In addition to the wealth of car moxie he contributes, he is never at a loss for an anecdotal—and occasionally raunchy sidebar. His comfortable, accessible delivery makes listeners feel like they’re part of the party.

The more low-key Hibbs, on the other hand, has a knack for making the sidekick gig look like the job of a lifetime. He doesn’t remotely dominate the discourse, but when he does speak, he’s wry, dry and sharp as a tack. Remarkably, Rosenberg found him after Hibbs responded to a Craigslist ad in 2010. The two have been in business ever since and it’s clear they share not only a passion for cars but also a deep regard for one another.

And then there’s Minasian, a wellspring of ideas and insight who ensures the program is professional and professorial, but oddly comforting as well. A former aircraft interior designer for Boeing, toy creator for Mattel and McDonald’s, and car designer for Toyota and Subaru, Minasian agiley navigates the show’s big picture and finer points alike.

He’s a lean-in, gripping sort of character whose interplay with Rosenberg and Hibbs contemporaneously adds legitimacy and sweetness to “Clutch.” The three are unmistakably friends. When asked where vehicles, and more specifically the auto industry, are headed, Minasian is quick to point out the car’s metaphorical significance to human civilization.

“It’s the single most recognized cultural icon of modern times. What was initially about an anthropological ability to expand our radius, allowing us to interact with different towns and families, the car essentially represented freedom, emancipation,” he said. “It’s why getting a driver’s license is such a rite of passage. But today I see its evolution as becoming more a vessel for connectivity and comfort.”

Although the automobile continues to morph to meet our collective tastes and needs—and is predicted to become less expensive and produced by fewer makers overall—ultimately the hosts feel the emotion surrounding cars remains relevant.

“The car is about relationships,” Rosenberg said. “And that’s what the show is about, too. We’re using our collective knowledge to create a relationship with the listener.” Clutch Radio airs 3 p.m. on Saturdays on AM-1090. For more, go to clutchradio.com. 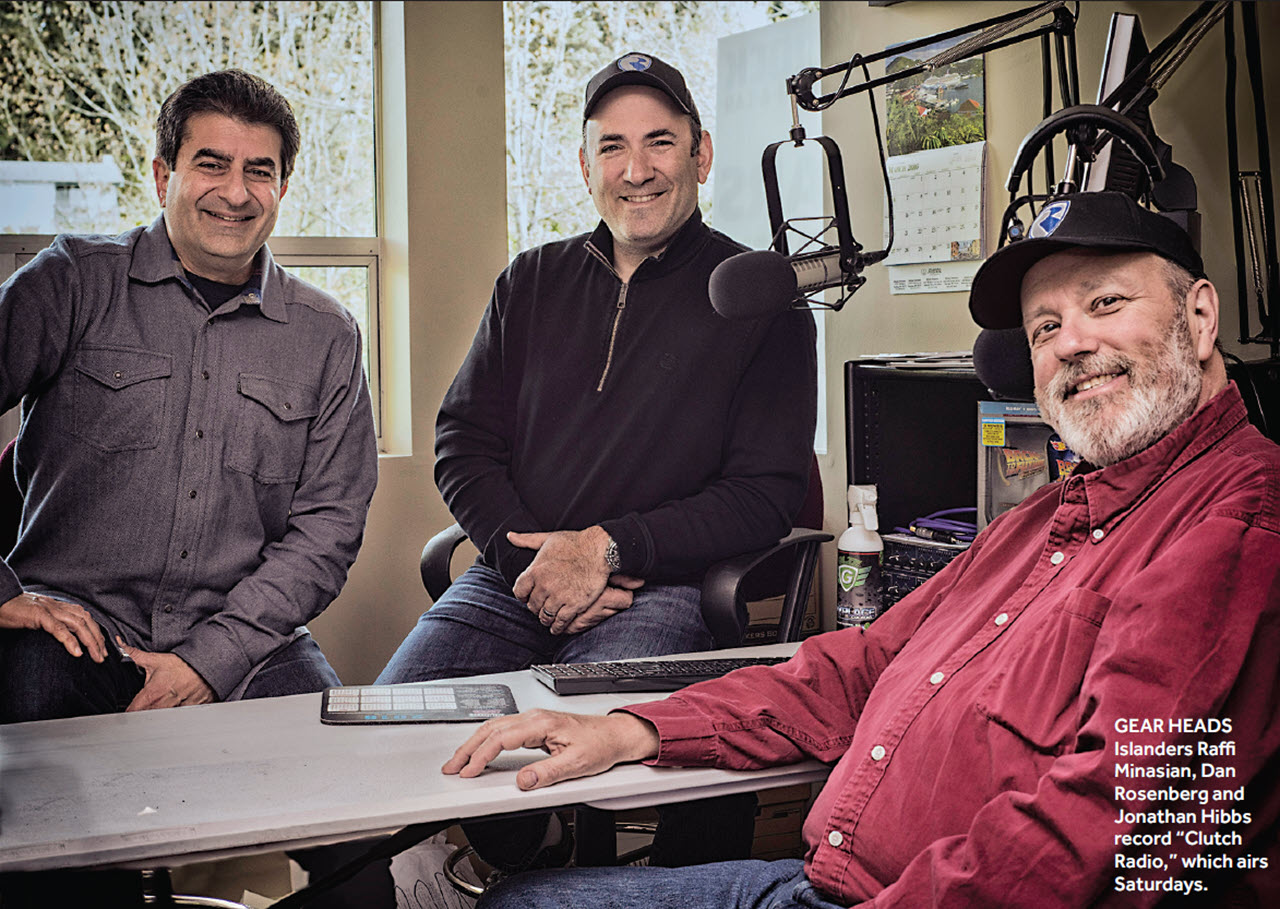 On the Bias // Venturini’s Throwback Style Fashions a New Beginning