Speak Easy // All in a Day’s Discourse and Dialogue

Google “the art of conversation” and you’ll find more than 1.7 million results for books, videos, blogs, memory tips, guided tours, TED talks and even seven-step systems for improving your ability to chat. Apparently, many, many of us have lost the gift for gab.

Happily, a gamut of island groups recognizes the value in keeping discourse and dialogue alive. Each Tuesday morning when owner/manager Kell Killian opens Pegasus Coffee House, he knows he will see the same conversation group of (mostly) men, who sit in the same nook and gather to, well, just talk.

Self-proclaimed travel psychologist Michael Brein is usually the first to arrive. He is soon joined by retired Los Angeles police detective Ed Aleks; musician/journalist/writer and proud hippy Art Hanlon; former PR man in the Reagan White House, current movie house owner and Michael’s cousin, Jeff Brein; and Harry Longstreet, an award-winning photographer and retired Hollywood movie producer and director. The men, who meet in some iteration almost daily at different coffee shops around the island, are like an improvisational jazz group. They use the art of conversation as a way to jump-start their day, to get their brains going.

But what does one talk about when seeing the same people so often? Current topics include existentialism, fractals, and time travel, as well as science, history, literature and previous lives. Themes can span aliens, the Holocaust and problem-solving. “We like to think nationally, internationally and maybe even intergalactically,” said Jeff.

The group prizes banter and the conversational segues are invariably met by hoots of laughter and self-deprecating analysis. “Are we progressing or regressing?” someone asked.

Listeners at nearby tables sometimes join in as if they were guest musicians with an established band, loose auditions of a sort. “You have to talk is the first rule,” said Jeff. “You can’t just sit there and listen.”

At the Jiffy Mart in Rolling Bay, another group meets daily at 3 p.m. “There are no gentlemen here,” declared one member. If the men at Pegasus are jazz players, the Jiffy Mart conversationalists are a finely tuned string ensemble playing variations on a main theme—their shared love for Bainbridge.

There, the conversation is also punctuated by humor. When the subject of one of their missing colleagues came up, one said, “He’s amazing, but we’re not sure why!” The men, including Charles (Chucky) Callaham, Bob Woodman, Steve DeLorey, Butch Gronley, Leon Heinze, Bob Olsen and Dan Wymer, meet every weekday except Thursdays, and never on weekends (“those are our pajama days”). How to join? “All you have to do is drink coffee and tell lies.”

The clan takes pride in never arguing. Instead, “we just tell each other how it is,” quipped one. They avoid religion, even though Wymer is a local pastor. They allow him “a quote from the Bible here and there.”

Do they talk about sex? “What’s that?” asked one. “When was that?” said another, and all the men laughed. They remember the island as a straw- berry metropolis and when it had a single doctor.

Why Jiffy Mart? Good coffee and a spacious communal table, plus members enjoy running into friends who stop by on quick shopping trips. “Somebody kissed me on the head the other day,” laughed Olsen.

At the southern tip of the island, the Marketplace at Pleasant Beach plays host to the Bainbridge Ometepe Sister Island Association. “We appreciate the atmosphere, the beer selections, and the fact that the coffee here is grown on Ometepe,” said Carol Carley, BOSIA chairperson.

Back in Winslow, Cups hosts multiple coffee groups each week. They include a Friday morning men’s group, a biker’s group, a Monday morning French-reading group, and city council members’ open houses. Marveling at its group of card players, operations manager Lauren Fellis quipped, “They bring their own tablecloth!”

Jeff Shepard co-owns Blackbird Bakery with his spouse Heidi Umphenour and observed that a sense of place is a key element for Bainbridge conversationalists. “Blackbird Bakery is like the front porch of Winslow,” said one satisfied regular.

All over Bainbridge, the art of conversation is thriving. As one islander noted, “It’s all about community here.” 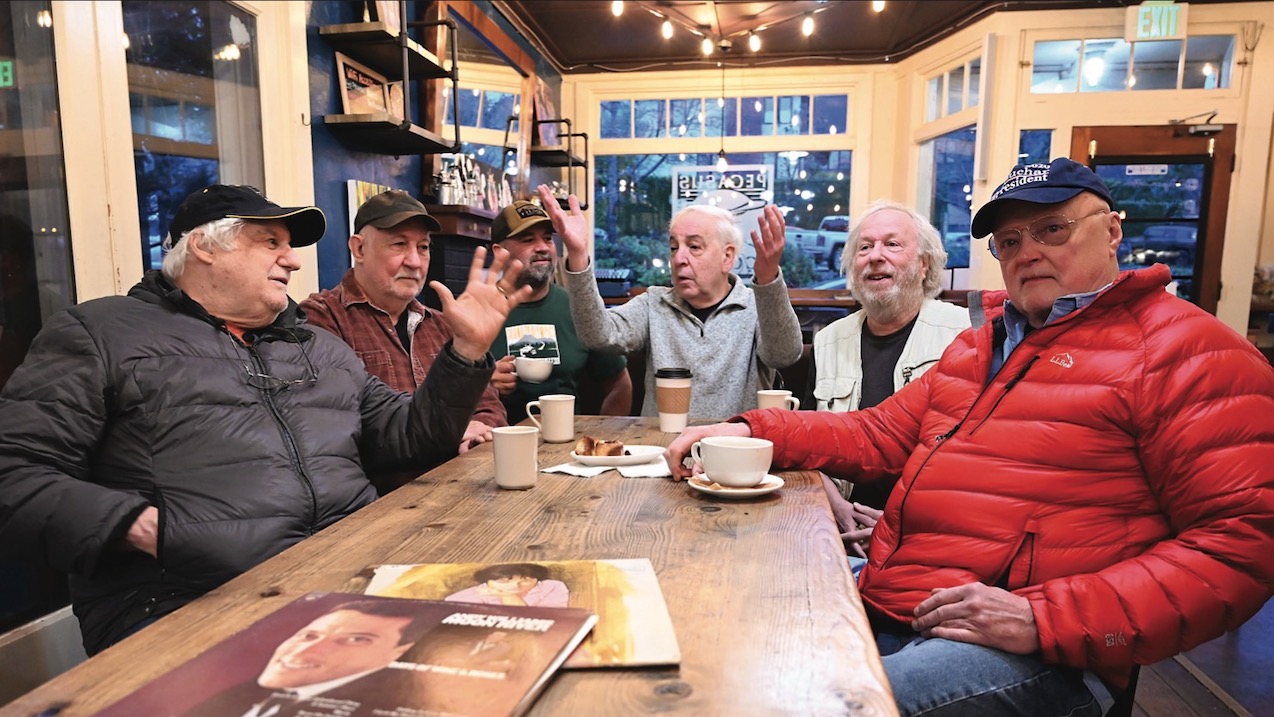