Sailing the Salish // Lessons Learned on the High Seas

She is 61 feet bow to stern with a 13-foot beam, the sleek, white yawl rig called Carlyn. Sails taut with Northwest breeze, she plies the waters of Puget Sound, also known as the Salish Sea, from Olympia to the San Juan Islands.

Salish Sea Expeditions calls the Carlyn their floating classroom, loading her with, among other tools, plankton nets, microscopes, colorimeters, Niskin bottles for taking water samples, and Secchi disks to measure water clarity. All of this to give kids in grades five through 12 the exciting, real-life experience of doing science.

Salish Sea Expeditions was founded in 1994 by Kathy Murphy and Sophy Johnston. The pair passionately believed in the necessity of a real world marine science experience for students around Puget Sound. Since its maiden voyage in 1997, Salish Sea Expeditions has sailed with more than 15,000 students and 1,000 teachers, some from as far away as Colorado, Wyoming and Alaska.

“We want an educated population making informed decisions about the things that we care about. One way to inform them is to encourage them to experience the Sound. Give them the tools to study it and leave them alone to ask their own questions,” said Seth Muir, executive director of the program.

The expeditions begin in the classroom with Salish’s marine educators introducing the students to the inquiry-based scientific method and tools for measuring and testing their theories. They then help the students plan their own expedition, from what question they most want to investigate, to where to go and what to eat.

Once aboard the Carlyn, the young scientists gather the necessary data for their study. Past groups have investigated the implications of a proposed marina on Lopez Island, the distribution of red rock crabs, and the occurrence of the sea star wasting disease in different species of starfish in Puget Sound.

Participants learn how to navigate, steer and sail the boat, raising and lowering her sails as a team. They go ashore to camp one night and sleep onboard the Carlyn the other. On the final day they are given the helm and asked to steer the boat toward home port with Salish’s crew standing by to encourage the young explorers.

“I loved being able to cook and plan meals, and working as a class to figure out what would be a good problem and prediction. It made me feel less like a little kid and more like an adult,” said one seventh-grader. Post-expedition, Salish educators return to the classroom to help the class synthesize the data they gathered and interpret their results.  Each year, Salish publishes the “Journal of Student Research on Puget Sound” and holds the Salish Sea Expeditions Student Science Symposium.

During the symposium, the students are able to present their findings both in poster sessions and brief PowerPoint presentations to an audience of 200 of their peers, science teachers and professional scientists. Tom Armentrout, a retired Bainbridge High School biology teacher, gave his students the Salish experience on numerous expeditions, often through his own private fundraising.

“I was convinced that getting students out on the water when they’re studying marine science, to actually do research in the environment they’re trying to learn about, was vital,” he said. As Salish Sea Expeditions comes up on their 20th year, they are looking to expand their program with the recent acquisition of the 85-foot research vessel Elettra III.

They hope to offer their unique style of STEM programs to seven times as many students around the Salish Sea 300 days a year with partners like the Seattle Aquarium and the Boys & Girls Club. In these times when the average child spends more time in front of a screen than they do outside, Salish Sea Expeditions offers the next generation an invaluable experience the thrill of discovery of the natural world.

Salish Sea Expeditions offers one- to five-day boat-based expeditions, as well as land-based experiences between September and May. Individual or home-schooled students can join an expedition and summer camp options are available. They also offer a public sail twice a year. See salish.org for more info. 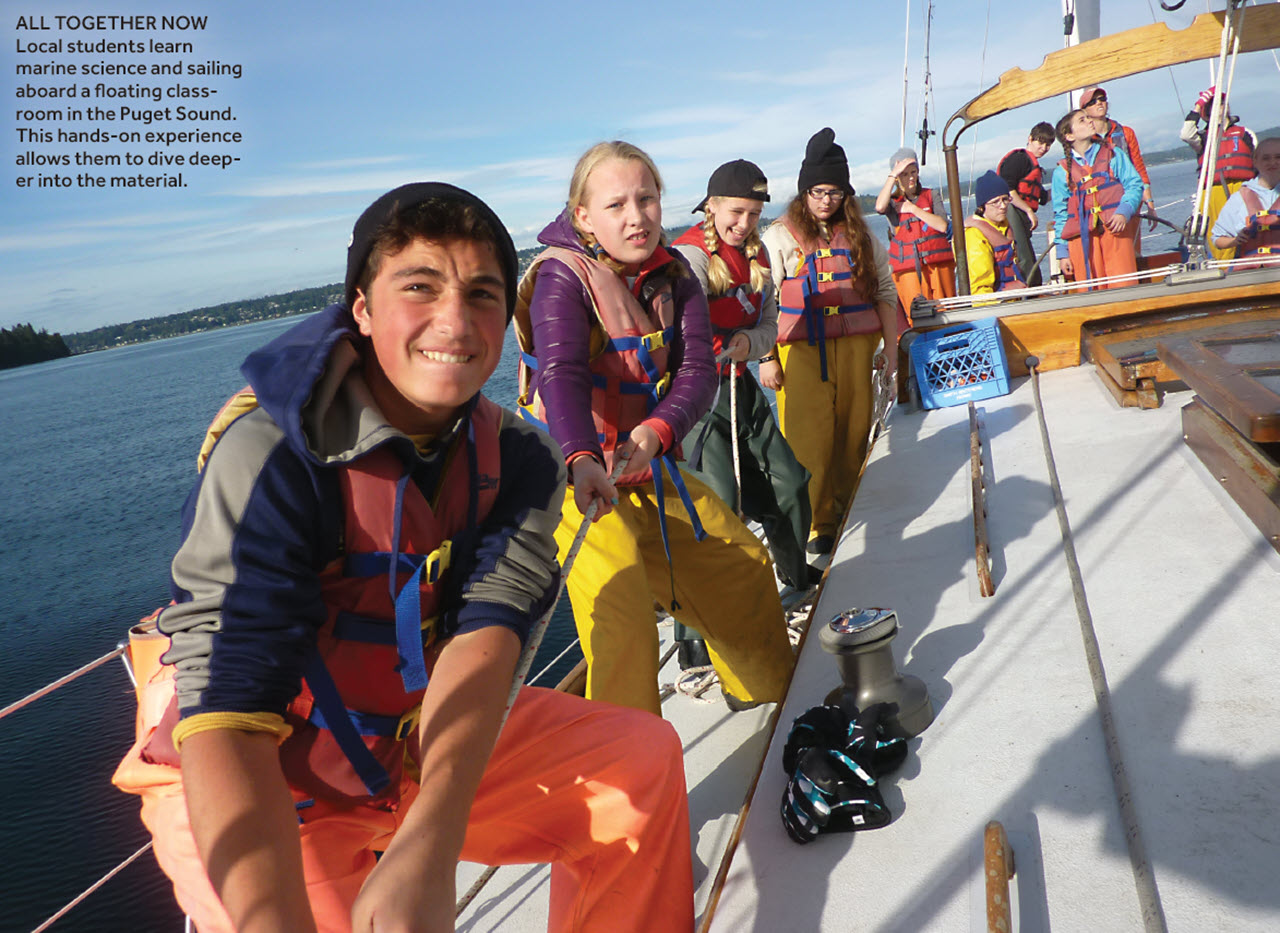