It was newton who asserted that a body in motion would remain in motion. Dr. Erica Saint Clair—physicist, blogger, educator, entrepreneur, science-champion and mom—embodies this first law of motion. And then some.

On the island since 2013, the energetic Saint Clair has paved extensive community inroads advancing her mission to make science accessible and fun.

Saint Clair first began to think of herself as an educator by observing her then preschooler, Isabella. “I thought, maybe we could teach her legitimate science without letting her know that that was what we were doing,” she recalled. She was inspired by her daughter’s intriguing questions like, “What if we could change the color of the moon?”

She and her husband, Evan, whom she describes as “a super history buff who spins the stories,” took the questions to heart and combined forces to answer them—the scientist taking a no-nonsense approach and the storyteller taking a far more imaginative path.

Their lively interplay evolved into a website and blog, “Rosie Research” (rosieresearch.com), which addresses the pressing issue of many more gleefully random questions.

What do comets feel like? What would happen if the earth stopped spinning? Why doesn’t wood melt? Saint Clair said the site also serves up “a ton of free downloads,” including instructions for binary code necklaces, a DIY Luke Skywalker light saber and a make-your-own exoplanet project.

Through her child-friendly approach, Saint Clair hopes to appeal to parents too. “The kids are going to love what we’re doing no matter what, ”she said.

“My goal is to get parents to think about science as something fun to do with their kids.” She acknowledged that most adults she meets did not have a positive science experience at school and, worse, they tend to transmit their ambivalence, if not outright dislike, to their kids.

But Saint Clair recalled it was adults who first excited her about science. Her parents always supported her inquiring mind, as did a favorite high school teacher who “made physics awesome.

”Awesome enough for her to spend the next 13 years studying it, as well as the “squishier” subjects of biology and chemistry. She ultimately earned a Ph.D. in physics from Boston College.

Serendipity an important factor in any true experiment—brought the physicist to the Ritchie Observatory at Battle Point Park, now the scene of many of Saint Clair’s family science programs.

At a public library story time shortly after moving to Bainbridge from Boston, Saint Clair met the spouse of an observatory board member and was invited to join the all-volunteer board of directors soon thereafter.

Seeing an opportunity for the observatory to attract families, she launched BPAstro Kids in 2015, a free monthly program series where families hear from experts and then do hands-on projects.

A recent program featured a scientist on NASA’s Mars 2020 team and then each family built their own Mars Rover “out of popsicle sticks and re-purposed electronics.

”Grants from foundations and from the Rotary Club of Bainbridge Island have helped expand and enrich the program. Last year Saint Clair noticed with delight that Kitsap Regional Library had started circulating telescopes, so she set out to create a spin-off “lending library” of science projects now housed at the observatory.

She dubbed it the BI-STEM (science, technology, engineering and math) library, an all-volunteer operation that readily accepts donations of science materials. A Bainbridge Community Foundation launched the library, purchasing “games, kits and books,” and provided labels and shelving.

“Buy Nothing Bainbridge has been incredible!” Saint Clair said of the local Facebook-based gift economy group as a source for donated materials. The ever-resourceful physicist used an app to establish a checkout system complete with free membership cards. As her daughters, Isabella and Georgia “the guinea pigs for our science units ”grow, Saint Clair says her projects are growing in sophistication with them.

Now that they know they can build light sabers, the girls want some upgrades to the lights and sounds of their homemade laser swords something a little truer to the movie. Saint Clair is determined to deliver: “My mission is to teach real science by doing fun science!”

Combining fierce curiosity with a wicked sense of humor, Lynn Brunelle’s gift is making science come to life. Her light approach to tough concepts has earned her four Emmy awards for “Bill Nye the Science Guy” scripts, and is evidenced by the many children’s science books she has written and edited. “If you laugh, you remember things, ”said Brunelle.

“If it’s fun, you’ll retain it.” 2014 saw the publication of Mama Gone Geek, a sweet and hilarious memoir in which Brunelle tackles topics ranging from head lice to armpit farts. “Kids are born scientists!” she said. “They are constantly manipulating their environment—dropping things, making bubbles. If you see something interests them, pursue it.

”Case in point: When Brunelle’s son, Kai, accidentally swallowed a magnet, she used a compass to track its progress rather than the doctor’s suggested, more odious method. The family learned about the digestive tract and magnetism, which became the basis for her son’s science fair project:

“I Swallowed a Magnet So You Don’t Have To!” “If you want to attract kids to science, make it cool.” Brunelle’s latest, Turn This Book Into a Beehive (April 2018), comes with a cover printed in soy-based inks and made of weatherproof material. After learning about bees, kids can remove it and create their own working hive. More at lynnbrunelle.com 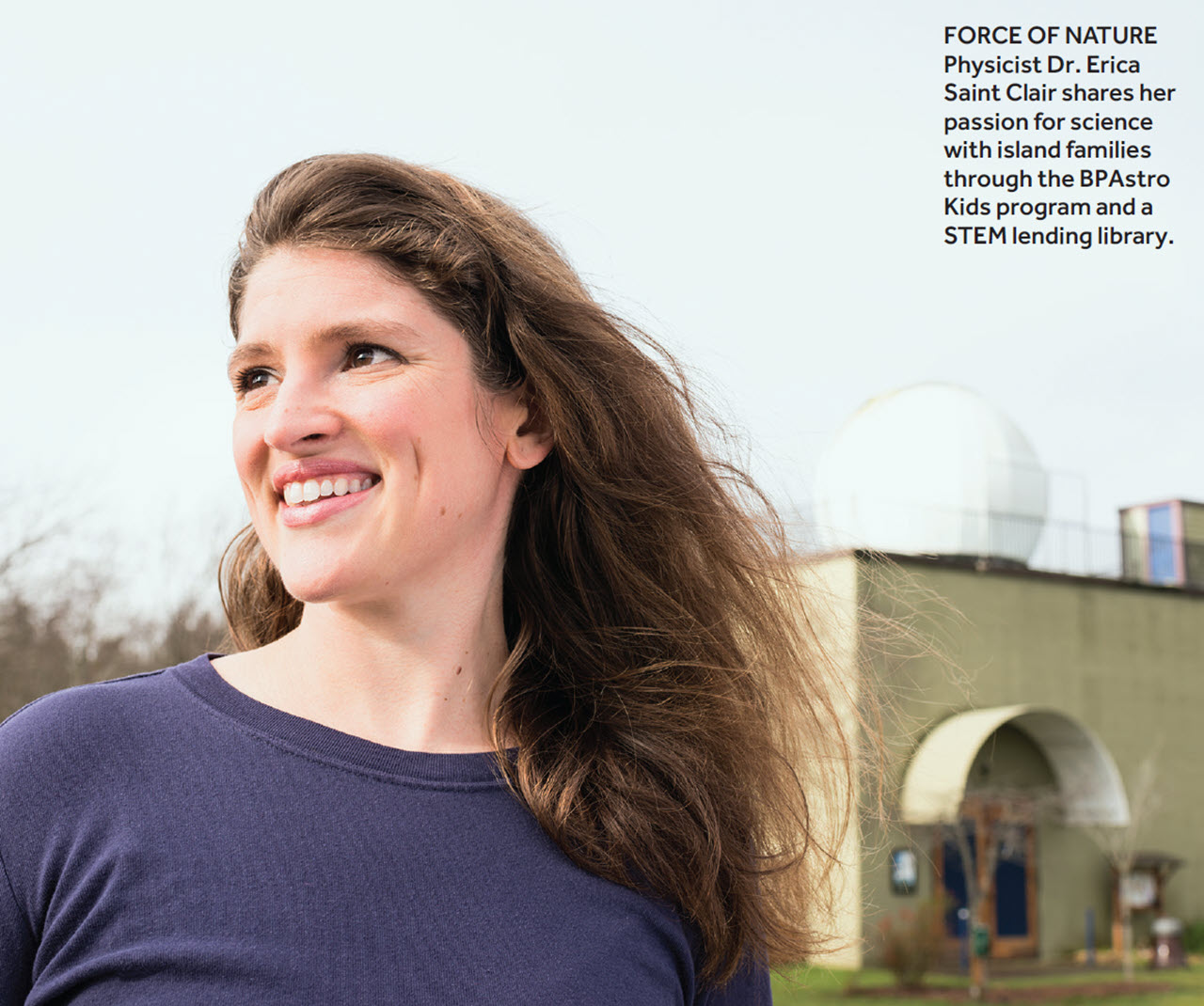