According to BHS associate principal Kristen Haizlip, there is a discernable group of students that find high school discouraging. They either don’t have support at home, don’t feel connected or have learning challenges not eligible for extra assistance at school. Their stories range from having to work to help a single parent support the family, to feeling overwhelmed in classes and not knowing how to catch up.

“If you are in special education, you get a lot of academic support; if you are gifted, you get challenging coursework and parents who are closely involved. But the kids in the middle have to pull themselves up on their own,” Haizlip said.

Some of them can become disengaged from school and have a hard time identifying with the culture of success at BHS. To change the outcome for those students, Haizlip, with the help of an anonymous donor, initiated the Academic Interventionist Program.

BHS doesn’t qualify for this funding, but, according to Haizlip, our high school “still has struggling students that would benefit from this type of assistance.” In the absence of state funding (and prior to the donor’s support), she decided to take on the job herself and started an after-school Spartan Study program in the library.

Haizlip, who would sometimes call students into her office for a chat if she saw they were failing a class, worked with students three times a week and soon enlisted the help of BHS teachers to work with small groups of students or one-on-one. Although Haizlip saw evidence of student success with this model, she still felt students needed more.

It was about that time that a community member approached Bainbridge Schools Foundation (BSF) with a similar vision: to help the most vulnerable and invisible in our community, particularly young people. The donor, who wishes to remain anonymous, had been moved by a young friend and former student that felt disconnected at school.

“His self-esteem suffered tremendously,” the donor recalled. “He was bright, but he wasn’t getting any support at home and no one was holding him accountable. My dream was to find a way to work with students like him on an individual basis.”

The meeting that followed between Haizlip, BHS, the district and the donor affirmed a perfect match between a need, and a need to give. “I was so excited when I met [the donor],” Haizlip said. With the newfound funding, Haizlip knew she could greatly increase the impact she’d made by just helping students on her own with volunteers.

BHS teachers Katherine Zonoff and Kristine Schrutka applied for the jobs and were a natural fit. Aside from teaching their regular classes, they work with individual students to set goals, check grades and conference with parents.

Haizlip said that the ultimate gift to these students has been self-esteem and self-advocacy. Whereas she used to summon students to her office to talk about their poor grades, now she finds they come to her to work on assignments from their interventionists.

The program has allowed Haizlip to be seen as less of a disciplinarian and more of an educator and champion. “Katie and Kristie help students talk to teachers and advocate for themselves,” Haizlip said. The hope is that these positions will be permanent.

They are currently funded for one year and would rely on future BSF donations to be renewed. Schrutka said it has been rewarding to watch these students overcome challenges in and outside the classroom. “I have seen students become more aware of their needs and take ownership of their education. The best part of my job is seeing them succeed by their own personal definition of success.” 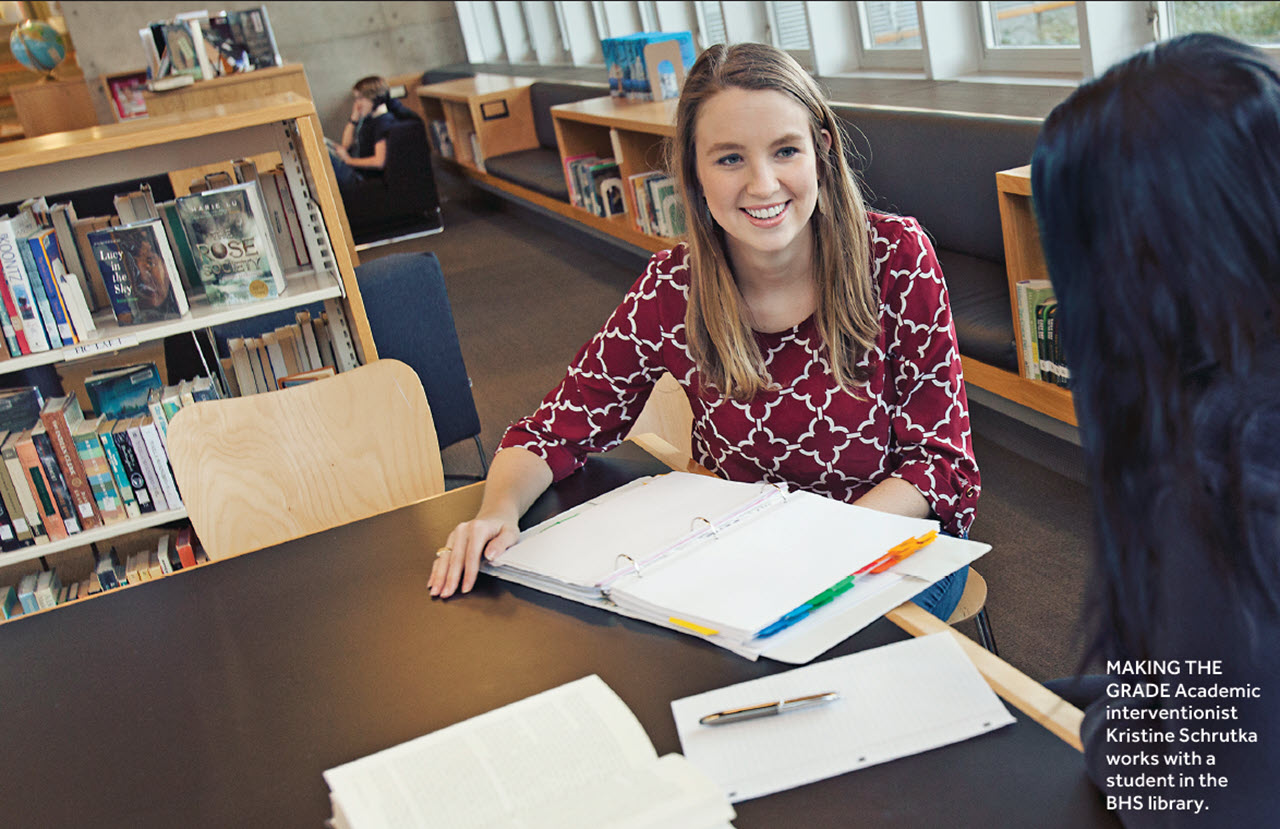