The Grand Forest encompasses 240-acres across three parcels, with approximately 8 miles of trails in an understory of largely second growth forest which was previously a DNR (State of Washington Department of Natural Resources) tract. Interior to the Grand Forest is the Hilltop parcel, being conveyed to the District has part of multi-year grant and Bainbridge Island Land Trust fund-raising campaign. The Grand Forest was purchased through a local bond and grant funds in 1989.

The Grand Forest is a popular destination for trail users on Bainbridge Island. It has a canopy of lush firs, cedars and maples and a few giant conifers. Trails are relatively flat with few inclines and a trail surface of dirt, mulch and gravel. There is no wheelchair accessibility, currently.

The North Grand Forest (39-acres) is a separate non-contiguous park parcel with similar terrain and forest canopy. For more information and partnership cooperation on the Heart of the Forest, a Bainbridge Island Land Trust non-profit campaign to link the two park tracts, see http://www.bi-landtrust.org/news.asp. 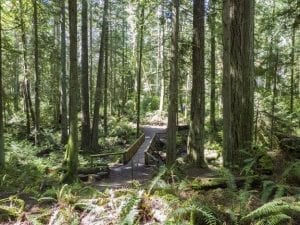 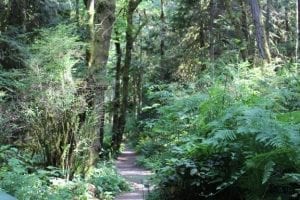