Picture This // Island Artist Draws on Her Singular Point of View

Cameron Snow admits she sees the world differently than most. That became apparent in fourth grade when she was asked on a science test to explain how a vacuum works. In response, Snow sketched a landscape with a deer on a cliff.

Today, as a professional artist and documentary filmmaker, Snow knows that her un- conventional perspective is a gift that can help others see differently, perhaps more expansively.

Her latest collaborative project is Natural Bainbridge: Working Together to Protect Our Island, a coffee-table worthy book, published this year in honor of the 30th anniversary of the Bainbridge Island Land Trust. The book represents “what it is that we love and treasure about the island; the magic we feel,” said Snow, who contributed detailed illustrations to the work. On nearly every page, her art complements the captivating photographs of Paul Brians and other locals, and is paired with text contributed by some of the island’s best-known writers. Editor Hilary Hilscher “harmonized it all,” said Snow, who was named an Island Treasure in 2016.

Though she relied on her experience in scientific illustration to execute them, Snow’s images are not so technical that they lack warmth and whimsy. “These are precisely the species you would encounter here,” she said, but her goal was to make the plants and animals relatable. “We needed birds that would look you in the eye.”

Snow’s illustrations of sand dollars or the cutthroat trout are so meticulous you would swear they were photographs. The detail invites you to look more closely, to investigate and appreciate the remarkable biodiversity of our island.

Produced by Land Trust board member Zan Merriman, Natural Bainbridge was four years in the making. Everyone worked without pay to tell the island’s story, incorporating past, present and future into an account of how people and place can co-exist.

It’s a topic familiar to Snow, whose documentaries put Bainbridge into sharp focus, examining how the island has evolved—physically, geologically and culturally. She especially likes to zoom in on the people who have been catalysts for positive change.

In “Forest in the City,” she relates how the people of Bainbridge Island saved the Grand Forest, and in “The Sakai Family of Bainbridge Island,” she tracks the tenacity and graciousness of the Sakais in spite of the injustice they suffered when the family was incarcerated at Manzanar and then Minidoka during World War II. In “Creating an Art Museum” her subject is how “the community created one of the best small art museums in the country,” the Bainbridge Island Museum of Art.

With the same attention to detail she brings to her drawings, Snow uses her camera to single out the way that community values—the subject of her next film—are the impetus for right action.

“There are some values that have been passed onto us: the importance of education, service to community, helping each other, kindness, and inclusiveness,” she said.

She’s also curious about what happens when values collide: “I think there’s a wonderful tension in the community over the preservation of nature and open space,” Snow mused. “People come here because of this. At the same time we want to be welcoming, we want our children to live here, we want affordable housing.”

On her own property at the south end of the island, Snow and her husband, Christopher, have built wooden boardwalks over the wetlands so they can stroll the grounds without damaging them. She pointed out the giant “erratic” granite boulder with glacial striations that anchors her cul-de-sac and the dinner plate dahlias, larger than a human head, in her raised beds.

She explained that her neighborhood was once a place where deer openly grazed, then the houses and streets went in. When she planted a garden, she tried to keep the deer out. Her attitude has shifted now: “After 20 years I’m thinking I should just grow stuff for the deer. And just as I’ve evolved, the community is evolving.”

Even though Snow didn’t answer that elementary school science test question correctly, her vision of wildlife in the modern world was certainly prophetic. In fact, when she returned to visit her beloved teacher years later, there was her science test pinned to the wall in full view. “She hung it up and it was there for years. I think it must have made her smile.” 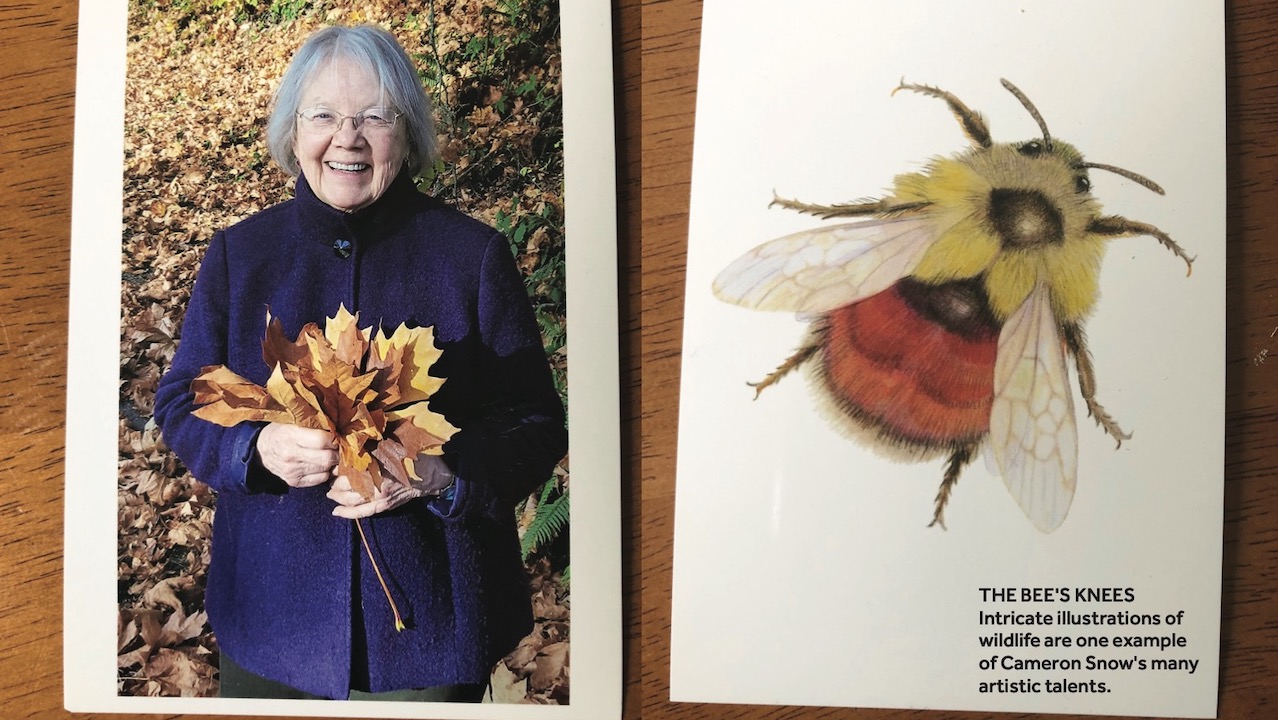