Lost Then Found // One Man’s Rewriting of His Fate

Richard lemieux reached his low point on a rainy Christmas night in 2005. Homeless and living in a van with his dog Willow for the prior eight months, LeMieux stood in the middle of the Tacoma Narrows Bridge and prepared to step off the railing into the darkness below.

LeMieux was an unlikely member of the homeless community. A former Ohio sportswriter and later a successful publisher of medical directories in Bremerton, he suffered a devastating reversal when the advent of the internet rendered his business obsolete. Debts accrued, family gave up on him, depression took a toll, and seemingly overnight he found himself living on the street.

It was ultimately the frantic barking of Willow, left back in the van, that convinced LeMieux to step back from the railing and give life another shot. He decided to chronicle the lives of the other homeless people he encountered every day, whose stories he found just as compelling as the sports stars he had previously covered.

“When I met homeless people on the streets of Kitsap County,” he recalled, “I saw characters. I saw insight. I saw stories. They laughed, they cried, they had interesting conversations, just like Johnny Bench (National Baseball Hall of Fame pitcher) or anybody else did. That inspired me to write about them.” The resulting memoir, “Breakfast at Sally’s” (the title refers to an affectionate nickname for the Salvation Army soup kitchen), was published in 2008. The book garnered glowing reviews and helped to lift LeMieux out of homelessness.

By 2017, LeMieux was a sought-after public speaker; “Breakfast at Sally’s” had undergone multiple reprints; and seven homeless missions, all named after his dog Willow, had been opened across the country by people inspired by his book.

A tooth chipped on an olive pit followed by a trip to the dentist, however, offered a reminder that there were some vestiges of his old life that were especially tough to leave behind. “My teeth were not very good in the first place,” he said, “and being homeless for three years with out seeing a dentist and not brushing for days made them worse.” LeMieux learned that he had a serious infection and that his remaining teeth would have to go.

As it happened, two Bainbridge Islanders were uniquely suited to lend a hand. Mike Brooks, a prosthodontist at Peninsula Prosthodontics in Silverdale, and Sukhi Dhaliwal, an oral maxillofacial surgeon at adjoining Kitsap OMS, are experts in a procedure for people who, like LeMieux, have teeth which are beyond salvage, a condition referred to, rather ominously, as terminal dentition.

Even better, this procedure, called the All-on-4, can be performed in a single day, with Dhaliwal removing the old teeth and affixing implants and Brooks crafting and attaching the new teeth. A simple switch-out for a permanent set of teeth is performed a few months later. “It’s as close to natural teeth as you can get,” said Dhaliwal. “It’s almost an instant transformation.”

There was a catch, however. After being referred to the dental team, LeMieux learned that the procedure would cost over $50,000. “I haven’t made a lot of money off the book,” he said. “When they sell a copy, I only get about 15 cents. I couldn’t even begin to pay for that.”

LeMieux believes his life is a series of miracles. From hearing Willow’s barking over the wind and rain that Christmas night on the Tacoma Narrows Bridge, to homeless friends who came up with a few dollars for gas or dog food at crucial moments, to the thrift store operator who donated the ancient portable typewriter on which he composed “Breakfast at Sally’s,” his redemption story is full of kindnesses, large and small, given and received.

Brooks and Dhaliwal decided to offer up one more, electing to perform the procedure at no charge. “Richard had been through so much and had overcome,” Brooks said. “We felt like a guy who got himself out of homelessness and was now trying to inspire others deserved to receive this help.” Over the course of a day, LeMieux lost a last relic of his homelessness and gained a new smile.

“For me,” said LeMieux, “the miracles just keep on coming.” 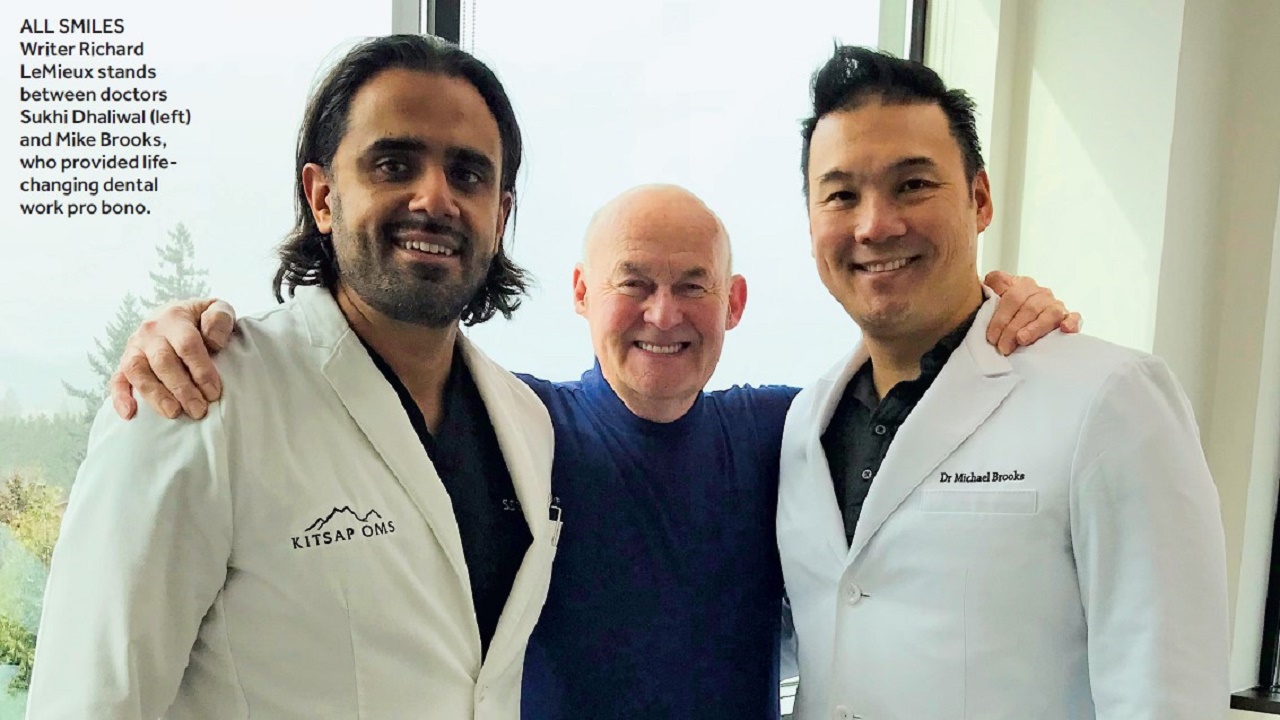