Imagine a ferry en route to Bainbridge that has been boarded by two of every dog breed on the planet, a veritable canine Noah’s ark. The goldies and Labs on the WSF Wagga Wagga would have their noses pointed to the canine couture at the B.I. Barkery dog boutique in downtown Winslow, sniffing out the latest fashions in dog gear, gourmet treats and collectibles. The collies and shepherds would stock up on premium chow and supplies at Paws and Fins pet shop, or they could trot on over to Bay Hay & Feed in Rolling Bay to check out the island’s longest chew toy and biscuit bar, conveniently located at pooch eye-level and flanked by pet accessories and training equipment. The miniature poodles and other diminutive doggies would have made appointments to be coiffed to show-dog standards at the Fluffy Ruff Dog Spa, where their spa treatments might include aromatherapy. And the huskies, terriers and boxers would plan on meeting up at Animal Magnetizm, the island’s popular “doggy daycare” on Fletcher Bay Road, hosting nearly 150 pooches every week. And, if they’ve brought their humans along, they might want to wash up at the self-service Salty Dog Wash (planned for this fall) adjacent to the Humane Society’s PAWS location in Pleasant Beach Village.

The Canary Islands may be named for Canarias (“island of the dogs”) but for doggy habitats—Bainbridge Island wins Best of Breed!

How many lovable canines share our homes and our lives? Gordon Vitig, owner and dog au pair of Animal Magnetizm, has a uniquely Bainbridge metric. By his tally, “one out of every two cars parked outside of Town & Country market contains at least one dog.” How do we all get along?

One way is the creation of new dog parks. In late summer, 14 years after the first dog park was created in Eagledale, the Bainbridge Island Metropolitan Parks and Recreation District opened Strawberry Hill Dog Park, the first centrally located off-leash park with drive-up access in island history. At 2.4 acres, the doggy playground is equipped with a spray-and-go shower, auto-refill water bowls, a perimeter walking trail, and an area for small, shy or recuperating dogs.

Jeremiah Ballou, a firefighter/paramedic for BIFD, loves the park for his three boxers Rusty, Bella and Piper. The longer airlock entrance lets the dogs ease into the pack and lets owners note any potential conflicts. What’s more, Jeremiah can watch his two kids on the adjoining playground while his dogs play on the other side of the fence.

Parks and Rec plans to add at least one more park by next summer. “We don’t want to rush into anything without the opportunity for research,” said Jay Kinney, chairman of the park board of commissioners, “and we’re learning new things from Strawberry Hill.”

Battle Point Park, with its wide-open spaces, is one option under consideration. One design plan for that location calls for camouflaging fences within the high grasses bordering a large football field size area on the north end.

“The [dog parks] committee is tasked with finding the most suitable sites within the district,” said Superintendent of Parks Dan Hamlin. “Most importantly, we want to encourage dog owner responsibility and cooperation on trails and fields to oversee the health and safety, including waste, of their pets.”

Monica Aufrecht, a dog parks committee member, “may be the best example of why keeping dogs on leash is important,” said MaryLou Vibrans, a fellow founding member. “She is simply scared of dogs! Being on this committee has been a catharsis for her.”

Future plans at Strawberry Hill include site amenities like a small shelter, more benches, dog exercise and toy features, and a Webcam. According to Hamlin, the hope is for many of these added features to be financially supported by users through a fundraising effort. Donations are welcome, as are volunteer groundskeepers. Interested pet owners can email [email protected] to find out more. 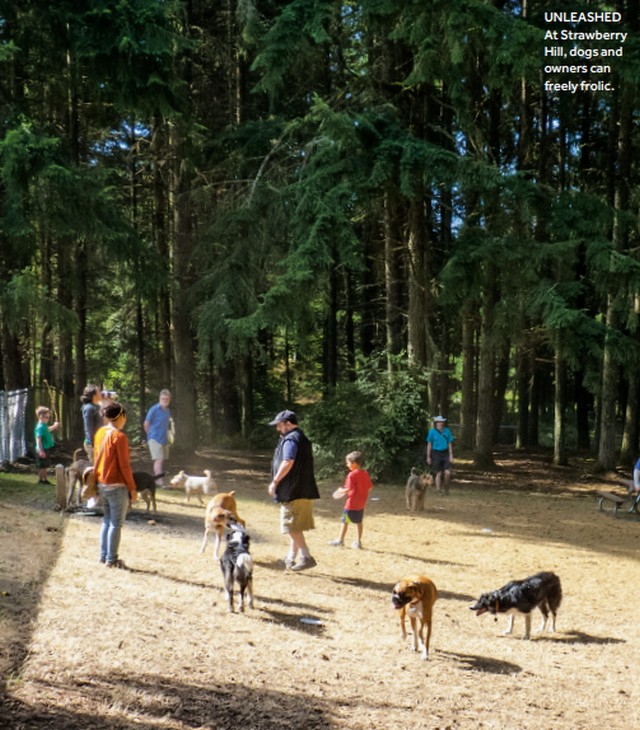 Where Are the Island’s Off-Leash Dog Parks?