Sgt. Trevor Ziemba, a police officer for nearly 30 years, recalls a time when he would get a 911 call for a mental health crisis— “a suicidal subject, a person under the influence, someone having a psychotic episode”—and the best he could do was send the troubled person to a hospital. At worst, he would have to make an arrest.

“Two weeks, two days, two hours later,” he would be called out again for help with the same person, another crisis, but incrementally worse. Without intervention and follow-up, “there would come a point where the situation could not deescalate,” he said.

A crossroads in Bainbridge policing came after a tragic encounter in 2010 with a mentally ill man who was fatally shot. In 2012 a federal jury faulted the City of Bainbridge Island for its inadequate police training but cleared the officer who had fired the shots.

Kimberly Hendrickson was working at the time as the examiner for the city’s Civil Service Commission. “This incident made me understand the need for a better response when people call 911 because of mental health conditions,” she said. Hendrickson envisioned a program that could combine the accessibility and responsiveness of law enforcement with the case management and community networking skills of social services.

Later, working for the City of Poulsbo’s Housing, Health and Human Services, she and Poulsbo Mayor Becky Erickson brought that concept to life with the creation of the Behavioral Health Navigator Program. Borrowing elements from other co-responder models in the state, the program provides follow-up, led by a “navigator,” to people who had a police encounter because of behavioral health issues, connecting them with available services and resources.

Bearing this superhero-like title, Bainbridge’s navigator (who flexes her time with Poulsbo) is the mild-mannered Kelsey Lynch. She doesn’t wear a uniform or badge, her master’s is in social work, and she complements the necessarily brusque formality of the police officers with a gentle, more empathic approach.

Though she doesn’t accompany police on calls, she is the first person officers reach out to after an interaction with someone they believe would benefit from the program.

She immediately circles back with the individual, family members and friends and begins connecting them with the services that seem the most appropriate, a task which requires know-how and perseverance. “The medical and mental health system is exhausting,” she said. “Families will put their toe in the water and then back out.”

True to her superpower, Lynch can navigate those channels, helping with medical language, insurance tangles, treatment plans and transportation and even securing basics like housing and food.

Also, in her unique role, she is able to bring information back to law enforcement. “If there happens to be another situation, then officers have a lot more information when they go out into the field.”

Alongside the navigator program is a robust 40-hour training for every Bainbridge officer—something Ziemba, who now has more than 1,000 hours of training in mental health issues, was instrumental in getting instituted. Officers learn tools to help people get past a crisis, like communication skills, empathy and providing an environment where they feel safe to de-escalate, he said.

Some, like Officer Charles Kazer, are further certified as Crisis Intervention Officers. Their strength is working in delicate situations like extreme mental distress or even negoti- ating for hostages. The point, said Kazer, is “how can we better help people in crisis?”

Lynch remembers a situation that illustrates the new paradigm. A Bainbridge officer struck up a conversation with someone in a local park who, it turned out, was intent on suicide. “They had the means in their hand,” she said. Once the officer put the person at ease and got them temporarily situated, he called Lynch.

“Because the officer had been so helpful and under- standing, this individual was willing to re-engage,” said Lynch. She met with the person the next day and was able to connect them with an island therapist, food services and housing support.

The two-pronged approach—officer training and follow-up from the navigator— has been a formula for more compassionate policing and for getting people out of a vicious cycle of crises.

Ziemba added, “We want people to see law enforcement as … someone they can reach out to. That becomes a success for every person who wears a police uniform.” 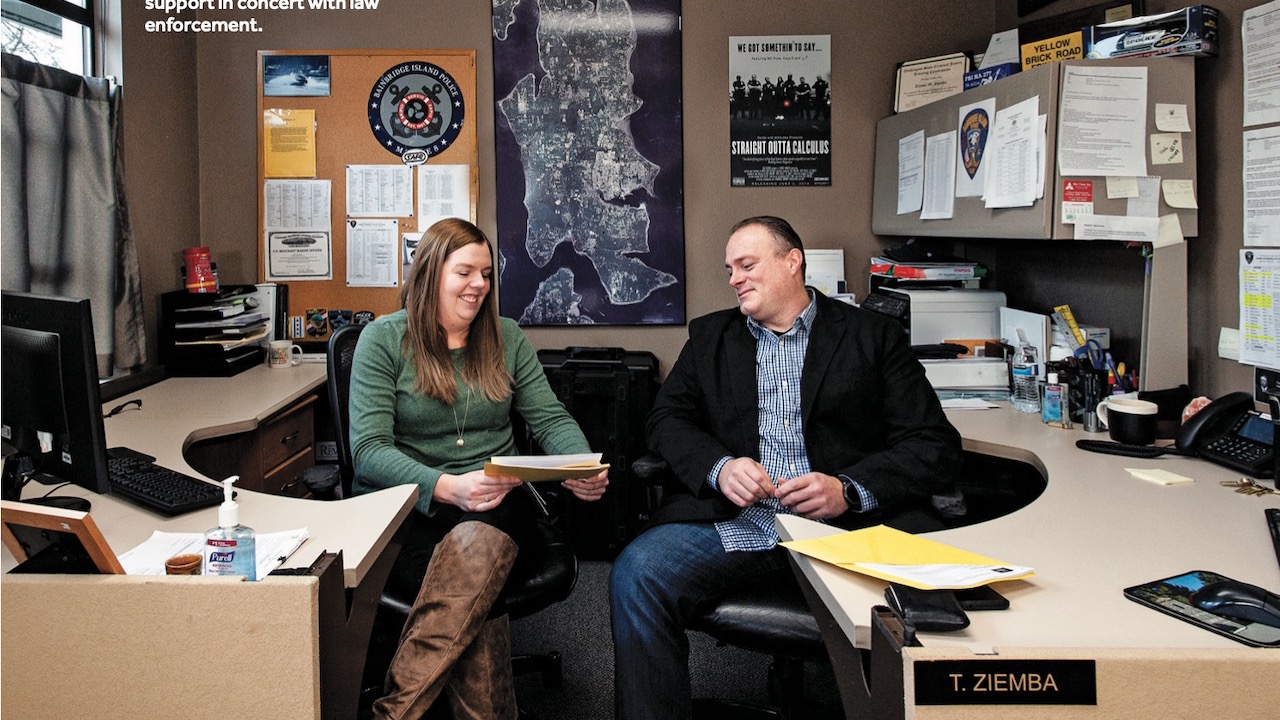 Give and Receive // Nonprofit Serves Bainbridge for 50-Plus Years