Bainbridge High School senior Mitchell Sachs had no idea where things would lead when, back in middle school, he read an article about robot-building competitions in a popular science magazine. He simply thought it sounded like a fun way to get kids together who like constructing things.

At the time he talked the idea over with his dad, John Sachs, a Boeing engineer. There were several roadblocks to starting a team—a team would need at least $10,000 in funding to begin and more than $30,000 for an entire season. Mentors needed to be on board. Kids needed to be interested enough to commit to spending many hours on the project. And there was a lot of catching up to do.

It turned out that there were already thousands of high school teams around the world that create robots to battle in competitions. FIRST (For Inspiration and Recognition of Science and Technology) is an international youth organization that operates a number of robotics contests. Under strict rules, limited resources and time constraints, teams are challenged to fundraise, design a brand, exercise teamwork, and build and program robots to perform in games against competitors.

Although John tried over the years to help his son establish a robotics team, it wasn’t until—at the outset of Mitchell’s senior year— he connected with Greg Moncado, then Bainbridge School district’s STEM (science, technology, engineering and math) coordinator, that the idea really gained traction. Moncado approached BHS physics teacher Enrique Chee, who agreed to lead a team if there was funding.

The community came together. The funding goals, under the leadership of volunteer (and father of two team members) Kevin Hawkins, were reached, and a rookie team of 35 kids and nine mentors hit the ground running. They rolled up their sleeves and tackled the challenge, logging in hundreds of hours.

In January, along with more than 50,000 other students from around the world, the BHS Spartronics received the rules of the 2014 games.
Teams were given six weeks to create a robot that would be able to work with robots of other teams to throw balls through high goals, push balls into low goals and toss balls over a central truss.

The Bainbridge robot was named ATLaS (for Advanced Tele-operated Launcher System). At first the objectives that the rookie team set for ATLaS were modest, but then they added to the list. Could the robot block other robots, shoot a low goal and also over a high goal? The team strategized defense, offense and passing operations.

Success didn’t stop there. They won the second competition, a district tournament in Shoreline, and then moved on to regionals in Portland, Oregon. There they battled 63 teams and won the Rookie Inspiration Award.

The Spartronics eventually were ranked 16th out of more than 150 teams in the Pacific Northwest and qualified in the top 24 teams for the April 2014 World Championships in St. Louis.

“Against all odds, the rookies from Bainbridge made it to the world championships,” said Hawkins, a mentor to the team. “I watched these kids change and grow in their whole approach to life. It was spectacular!”

“Being on this team helped me see what engineering is all about,” Mitchell said. “It’s design, building, strategy, working with materials and working together as a team. I realized you don’t have to have the best robot out there. You just have to be smart and know how to work together as a team and with other teams. This was the best part of the whole year for me. I fully intend to be a mentor and stay involved.” Mitchell heads to Colorado School of Mines this fall to study engineering.

This year Bainbridge will add a middle school robotics team to its ranks.

“If you like building things, this is the team to join,” said Spartronics teammate Ben Warkentin. “You gotta like to build things, you gotta love learning new things and working with people…and you gotta love pizza.” 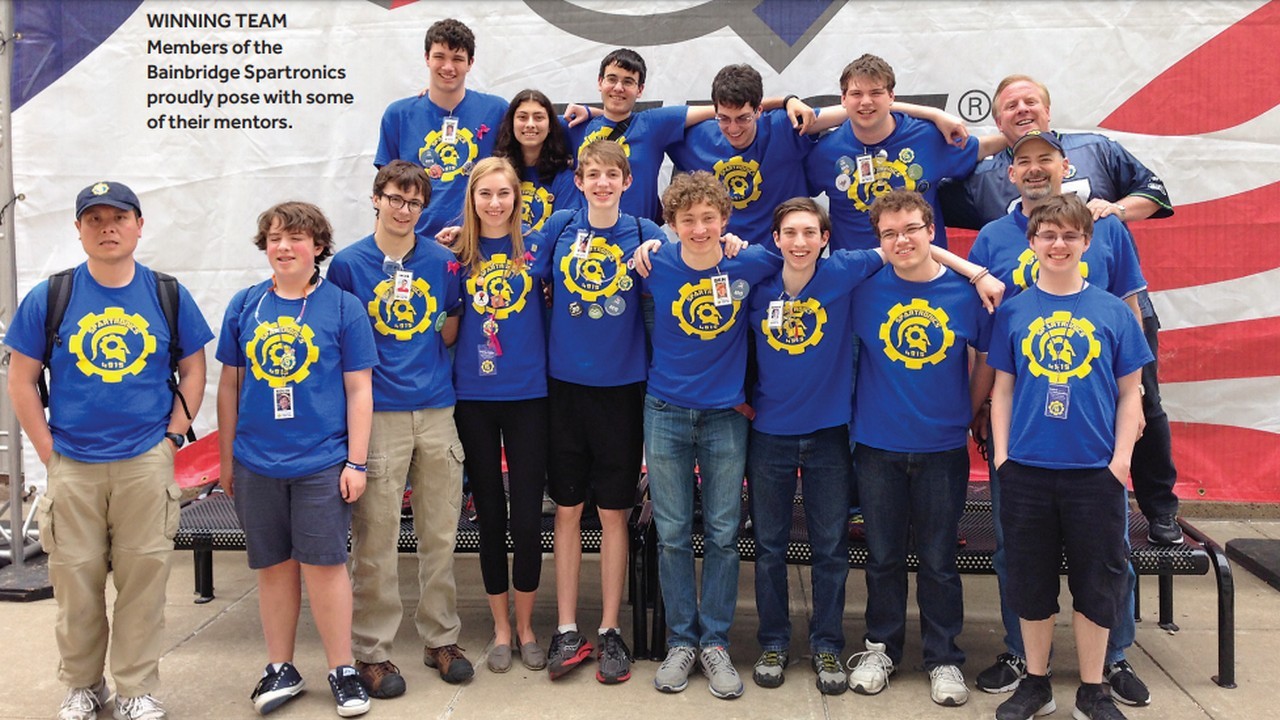 Are We There Yet? // Destination Imagination Drives Creative Teamwork