It’s 9:15 p.m. Inside the comfort of your Bainbridge Island home, you suddenly feel a sharp pain in your chest. Is this indigestion? A gallstone? An ulcer? A heart attack? You draw a deep breath and dial 9-1-1.

After-hours care has long been a pivotal issue on Bainbridge, and how you pivot can make a vital difference. For many years the Winslow Clinic of Virginia Mason provided a freestanding emergency room, seeing patients at nights and on weekends. These days, linking up with 24/7 access to your doctor for “urgent care,” a level below emergency care, on the island is accessible only via Virginia Mason’s premium Dare Center concierge program or through the less costly Member Plus Family Health, a membership-based practice in Winslow.

The Doctors Clinic offers walk-in urgent care weekdays 3 p.m. to 6 p.m. and Saturday mornings, but not in the dark of night. Even a well-staffed North Kitsap Urgent Care Center, at the intersection of Route 305 and Bond Road in Poulsbo, is closed after 8 p.m.

For emergency treatment, the golden rule is the “golden hour,” the window of time during which intervention is critical. In a race by car or ambulance, Harrison hospital is a 35-minute drive to its Silverdale campus, or 45 minutes to its Bremerton hub. No worries for a less severe sports injury or infrequent labor contractions. The Bainbridge-Seattle ferry run might land you in a city bed sooner, if docking time is on your side.

9-1-1 will send island paramedics or EMTs to your door. “That’s what your taxes pay for,” said B.I.F.D. Fire Marshal Luke Carpenter. Thanks to a 2013 Medic One grant, our island’s EMTs are now equipped with defibrillators that can transmit EKG heart data while you’re en route to Seattle’s Harborview Medical Center, a Level One regional trauma facility, or to the cardiovascular center at Bremerton’s Harrison hospital.

If this is a life-threatening emergency, the lifeline call goes out to Airlift Northwest, part of UW Medicine, which will send a pilot, two flight nurses and a chopper to your rescue. A little more than six minutes is all it takes from the helipad at the Madison fire station to Pill Hill in Seattle. The cost? A mere $13,000. Some islanders plan ahead for this possibility and subscribe to a separate membership program that covers the gap between their current health insurance benefits and total airlift costs. Each year more than 100 flights cross safely from Bainbridge to Harborview and Children’s Hospital, among other destinations.

The after-hours concierge health care concept is an idea that was minted in Seattle. In its purest form, these programs are tantamount to having a private physician; members pay fees in the neighborhood of $10,000 annually to be part of a tiny practice where personal service and everything but catastrophic care is included. Offering extra flexibility in scheduling, concierge health care is generally considered a luxury.

Member Plus Family Health, founded by Dr. Greg Keyes, brings this concept down to earth by offering health care that includes longer appointments, same-day scheduling and more immediate access to doctors at an economical price point of $10 to $65 per month. The doctors at Member Plus stay late, come in early and see patients on weekends if needed.

Both Keyes and Dr. Bruce Nitsche of the Dare Center make house calls, including to island senior centers and nursing homes.

This November, Harrison hospital broke ground on the island’s first 24- hour urgent care center, scheduled for opening in November 2014. The facility, designed by Bainbridge architect Matthew Coates, features a circular hub-and-spoke design in which patient exam rooms are situated like pods in the spokes and the medical team is stationed at the central core. The facility is in direct proximity to the island’s helipad. Harrison Silverdale also offers heliport access along with a state-of-the-art orthopedics wing featuring DaVinci robotic surgeons and spacious birthing suites in its maternity wing.

It’s comforting to know that we’re not just marooned out here in the Puget Sound and that we do have options—even though we hope we never need them. Member Plus’ Dr. Blain Crandell explained it this way: “Our number one goal is to practice preventative medicine that is designed to avoid medical emergencies in the first place.” 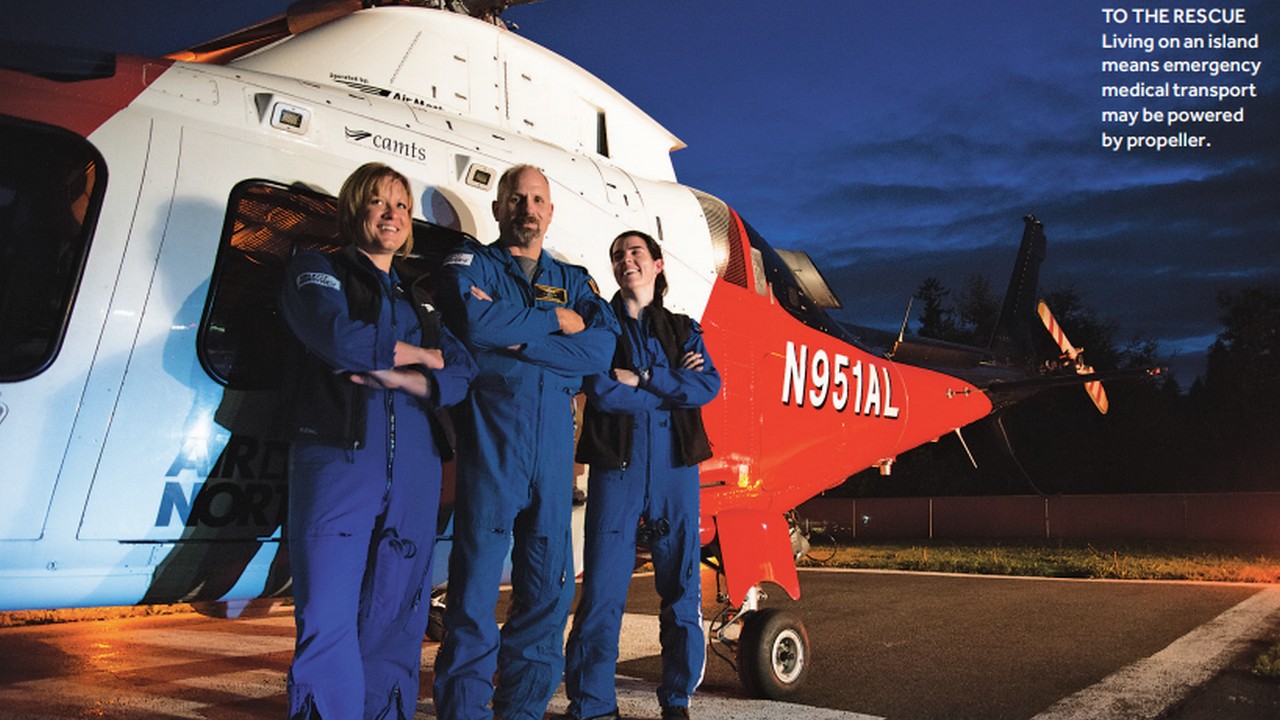 Is There a Hospital on Bainbridge Island?