Trips To The grocery store or library may seem like run-of-the-mill outings for most people. But for a growing number of Bainbridge Island residents who cannot drive, those errands would be impossible if not for the help of Island Volunteer Caregivers. “Most of the requests our volunteers fill surround transportation issues—trips to the doctor, to the Senior Center,” said IVC program manager Robin Gaphni, “but we’re getting more and more companionship requests from people who need social interactions.” And like transportation requests, companionship requests run the gamut: a weekly coffee date, a standing game of gin rummy or reading aloud to someone whose eyesight is failing.

IVC began in 1996 as a resource to fill unmet needs in the community. It was previously known as Interfaith Volunteer Caregivers, but recently changed its name to better reflect those they serve. “We were hearing from a lot of people who said they were reluctant to call us for assistance because they didn’t belong to a faith community,” said executive director Rita Elsberry. “We didn’t want our name to be a barrier to anyone. Our name change hasn’t changed who we are or what we do, but it has helped us reach more people.”

Right now IVC’s roster has 140 volunteers caring for 200 care receivers. Each month volunteers donate more than 600 hours to assist local islanders. “As the population ages, we are bringing on care receivers at a faster rate than we are volunteers. We are trying to recruit more volunteers so we don’t burn out our exiting ones,” Gaphni said. And while IVC predominately serves the older population, there are a number of younger care receivers who need assistance as well.

Here’s how it works: Each week IVC emails a needs list to its volunteer base. For example, “Monday’s requests are: 8 a.m. ride to water aerobics, 11 a.m. blood draw in Poulsbo, 2 p.m. hair appointment in Winslow.” Then, volunteers match the needs to fit their own schedules. If, for instance, a volunteer was planning to go to Poulsbo on Monday anyway, it’s easy enough to drop off someone for blood work. IVC volunteer Catheryn Oakland said volunteering with IVC is very flexible. “You don’t have to commit to weekly time blocks or certain days,” she said.

“Do what you can, when you can. If one week you can’t do something, that’s okay.” Oakland finds volunteering with IVC tremendously rewarding. By interacting with various folks and driving them to the pharmacy or the dentist, she’s heard interesting stories and forged strong connections she might not otherwise have made.“I have been so inspired by the people I’ve met through IVC. I’ve often said that this is a gift I give myself,” Oakland said. Both volunteers and care receivers are vetted through IVC.

Volunteer screening includes review of an applicant’s driving record, a background check and calls to references. Care receivers are interviewed by IVC staff to make sure volunteers are entering a safe environment. And along with the safety precautions, IVC staff get to know the volunteers and the care receivers to better facilitate relationships. “We really try to match volunteers with the care receivers. When we bring on new people, we find out their interests, their backgrounds and we try to make a good fit,” Elsberry said. As a result, bonds are made, for example, over a mutual love of baseball or a fondness for jazz.

Care receiver George Friese’s face lights up when he talks about Susie Borne, the caregiver who visits Friese and his dog Bowser. Borne comes three times a week to walk Bowser, but you can tell by the way Friese speaks of her, she’s much more than just a dog walker. She’s a constant in Friese’s life and provides a sense of stability. “IVC has offered a great deal of relief to me and lessened a degree of anxiety,” Friese said. “It’s comforting to know there is a community of people who can be of assistance.”

Oakland encourages people to become a volunteer with IVC. “This is a ‘many hands make light work’ situation and what IVC does is so important. I am often humbled by the very basic needs I’m able to assist with—like driving someone to Helpline House for their weekly groceries,” she said. “That’s an urgent need and I’m happy to help fill it.” 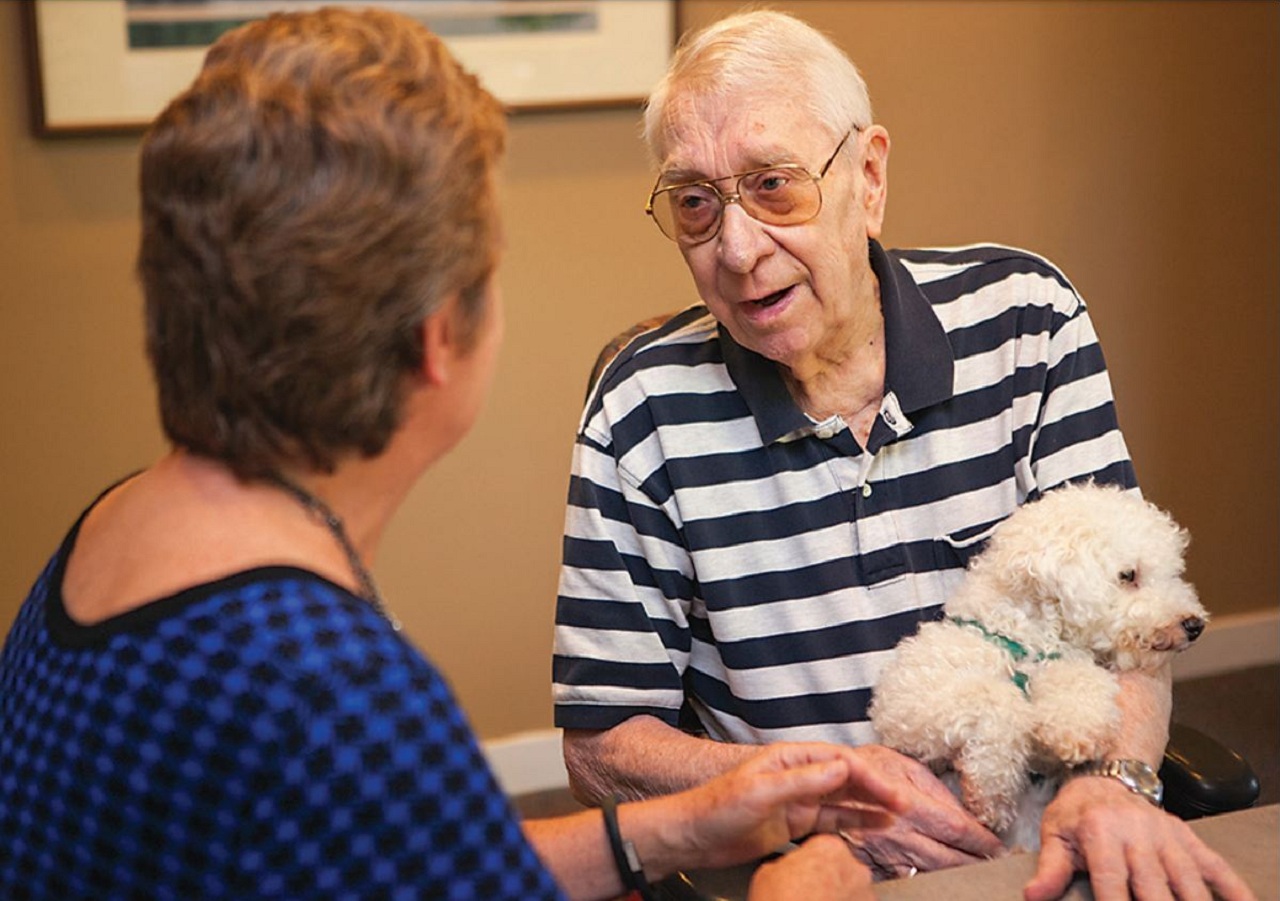 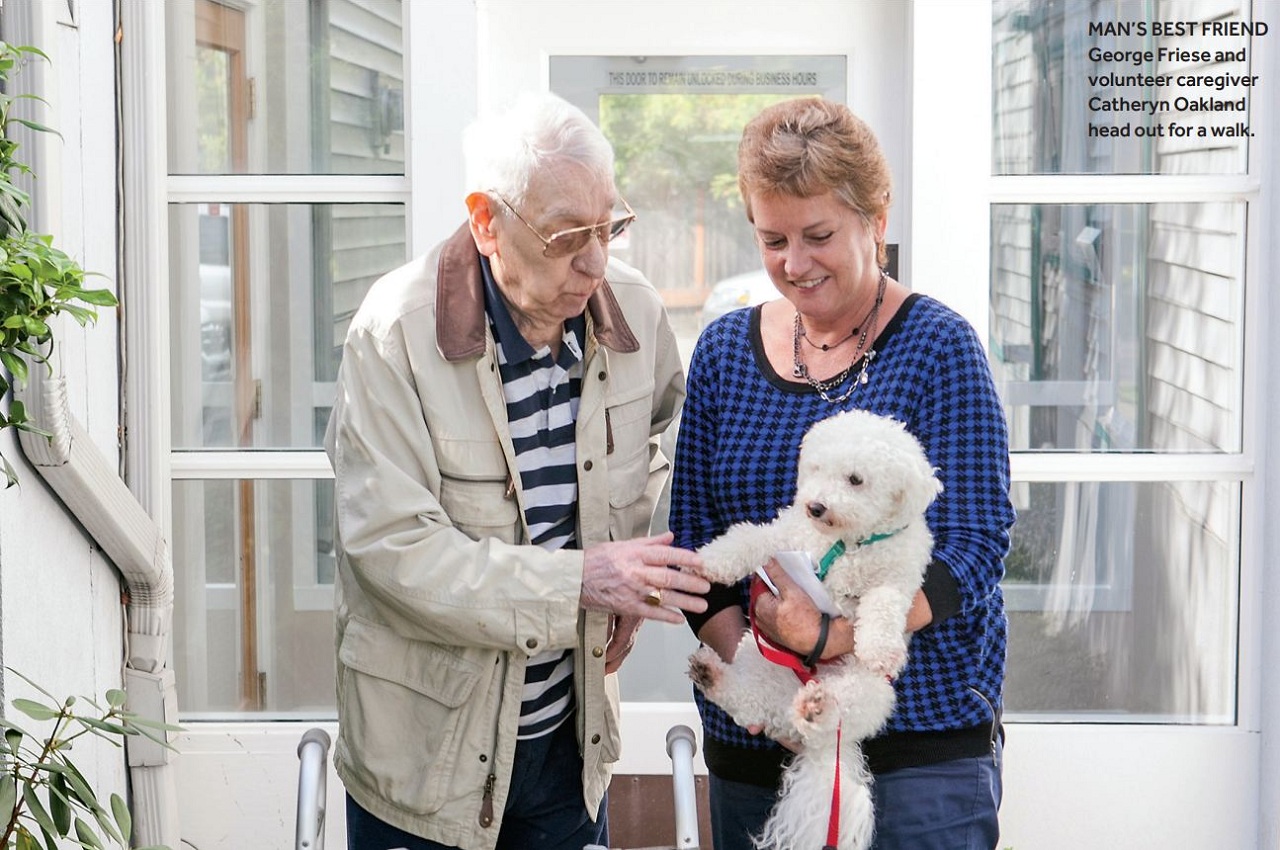