Do the Write Thing // Celebrating the Magic of Pen and Ink

When was the last time you received a handwritten letter? Not a scribbled sticky note or a few words on a birthday card, but a heartfelt, timeless message created by putting pen to stationery? Years? Maybe decades? Annabella Serra, owner of The Lost Quill boutique, which offers handwriting workshops and supplies, wants to change that. “Our whole history is handwritten,” she said. “It pains me to see that people cannot read handwriting. Not only that they can’t write, but they can’t even read it.”

Some school districts in the state (not Bainbridge Island) have abandoned teaching cursive writing, and a bill last year to mandate cursive instruction in Washington schools did not even get a committee vote. Serra’s daughter, now a senior in high school, had cursive instruction in school and loved it, but some of her friends didn’t have that opportunity. “In fact, it was my daughter who inspired me to open the shop,” added Serra, who began teaching calligraphy and handwriting workshops at The Old Boar (a tutor-supported drop-in study hall) in 2013.

When a space opened up in the little alley off Winslow Way two years ago, Serra took it on. “It felt like the timing was right,” she said. “I can’t be so pretentious as to say there was a need for this. No, there was no need. People didn’t even know that handwriting is fabulous. But they’re starting to embrace it.” Asked why, in this digital age, we should write by hand, Serra explained, “There’s an important connection to the brain that’s formed when the hand physically writes that doesn’t exist when you use a computer. It keeps the brain engaged, so you retain much more. Typing on a computer allows the brain to get lazy.”

An intimate and beautiful space, The Lost Quill is filled with classical music, charming art and antique furniture. The centerpiece of the room is a large wooden worktable. Here, Serra teaches workshops in handwriting, calligraphy and Sumi-e, traditional East Asian brush painting. Often, families come for a workshop, said Serra. “The largest I’ve had is eight people, three generations together. It’s wonderful to see the chemistry come alive in the family.” For handwriting and calligraphy, she teaches with dipping pens exclusively. “The kind you dip in an inkwell,” she explained, adding that she carries more than 140 colors of ink.

She also maintains an inventory of quality fountain pens and takes the time to help her customers find the best one within their budget. “You should let the pen do most of the work,” she said. “I can spend over an hour with somebody looking for the right pen. They don’t have to be expensive.” But don’t expect to go home with a ballpoint. “I think that cheap plastic ballpoint pens are one of the worst things that have happened to handwriting. You start trying to follow the ink. There’s no weight, so your hand cramps up just trying to get the pen not to fly off.” Because she loves to write letters, she also carries a small selection of fine Italian and Spanish stationery.

Fountain pens at The Lost Quill range from $5 to $3,500. The good news is she likely has a pen for around $20 that’s just right for writing that letter to your grandchild. “When grandparents come in, I say, ‘Write to your grandchildren! Write a letter. Don’t respond to text messages. Write them a letter because they will write back,’” said Serra. “It’s wonderful to unearth a pack of letters that were written by somebody. It’s a treasure, emotionally and intellectually.” Serra treasures the island community and wants to be certain she can continue to serve her customers to her own exacting standards. “I keep pretty quiet,” said Serra. “I don’t cater to the casual visitors or the tourist crowd. I don’t have things to offer them; it’s very specialized. But I want to keep handwriting alive.” 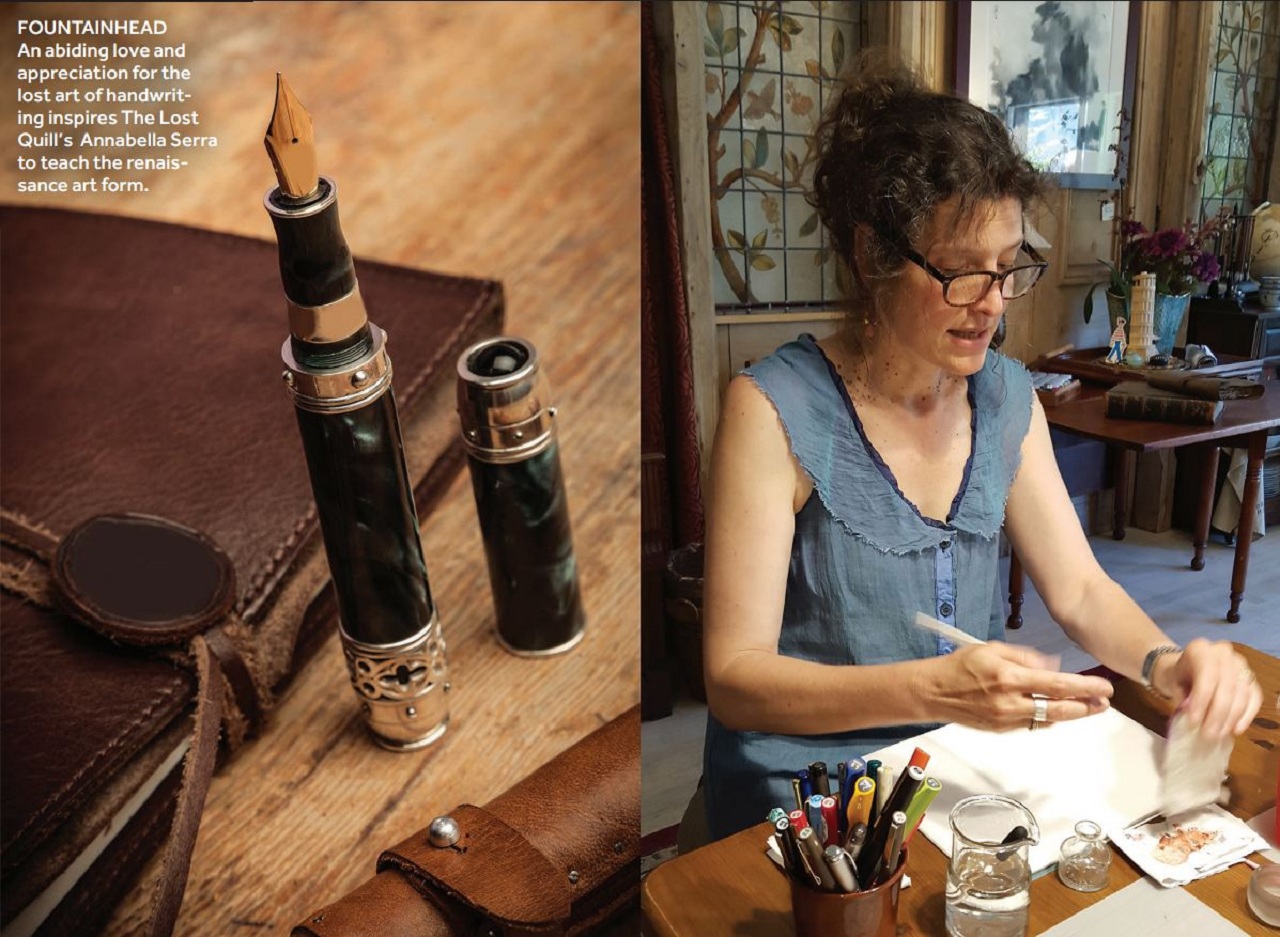 Mind Games // The Modern Relevance of an Ancient Practice

What’s in the Water? // Seniors Who Keep On Keepin’ On