Mind Games // The Modern Relevance of an Ancient Practice

Anne Tilly has been meditating for a long time. For a really long time. On a sunny Thursday morning, Tilly, at 102 years old, is the senior member of a group of seven residents gathering for their weekly meditation session on the fourth floor of Madrona House.

The participants, some in wheelchairs, others with adjacent walkers, sit in a circle as their leader, Steve Parsons, takes them through some preliminary foot exercises. Then, after a few deep breaths and a ring of the “meditation bowl,” he instructs them to sit up straight, close their eyes and focus on their breathing.

As ambient noises arise—someone loudly preparing coffee in a nearby kitchen, a TV playing a game show in an adjacent room—Parsons reminds the group to acknowledge the sounds, then return their attention to their breath. A long-time meditation instructor, Parsons gives the same advice for thoughts, emotions or sensations that arise during the meditation. Simply note them, then refocus on breathing. After 20 minutes, a second gong sounds and the seven open their eyes and re-engage with the world around them.

After the session is complete, Tilly explained that she has been meditating, in one form or another, for most of her life, long before she knew a name for the practice. “I get the satisfaction of being very close to family and to the powers that we can’t understand yet,” she said. “Very close—I can feel their arms around me.” For as long as she has been meditating, Tilly still feels that she has much to learn. “I was thinking someday now, before too long maybe, I’ll know what it’s all about.”

Elsa Wetzler, a fifth grader at Sakai Intermediate School, is a bit newer to the concept of mindfulness. Periodically during the school day, her homeroom teacher, Melissa Mann, sounds a wind chime. The students stop whatever they are doing, take a seat in a chair or on the floor, close their eyes and simply breathe. Wetzler, 10, explained the benefit she derives from these mindful minutes. “I like it because if you’re really stressed or worried about something, it puts your brain on an off switch so you can breathe and you don’t have to worry about other things.” Her classmate Izzi Pujolar, 11, agreed. “You have so much on your mind with working and you’re thinking a lot of thoughts and when you hear the chime, you sit down on the ground and you just breathe. It helps you calm down.”

Mann’s mindfulness techniques, also practiced in other classrooms across Sakai, grew from a grant from the Bainbridge Schools Foundation. The grant brought Jen Breen, owner of Bainbridge Yoga House, into the school to introduce both students and teachers to the nuts and bolts of meditation. Breen explained that it is important to provide coping strategies for kids growing up in today’s environment of constant stimuli and incoming information.

“In the ’70s, I grew up driving to Idaho in the summers in a big station wagon,” she recalled. “We had no devices and I would stare out the window for hours and I would just breathe and it was a form of meditation. I think there’s not space for that right now. So, the practice of mindfulness meditation is like a breath of fresh air and it’s a way to pull the pendulum in a different direction.”

At Wilkes Elementary, guidance counselor Sue Constan has been working with even younger meditators, using programs such as Mind Up (improbably created by actress Goldie Hawn) to teach students how the different parts of their brains may cause them to respond to the world in positive or negative ways and how they can use breathing exercises, referred to as the “core practice,” to better control their reactions. “The power of this curriculum,” Constan said, “is that kids start to understand their brain. And they start to understand when they have worry or stress or a big emotion—anger or whatever it is—what’s going on in their brain. Once they know that, it’s half the battle.”

Wilkes fourth grade teacher William Covert has seen these programs pay tangible benefits in his classroom. “Throughout the year, but in particular during our testing times, I saw a more relaxed, focused approach in students’ efforts,” he said.

From kindergarteners to centenarians, and for all of us in between, Bainbridge Island offers a rich array of meditation choices. The variety reflects the evolution of a practice once relegated to hippies and flower children to one utilized by such mainstream stalwarts as the military, police departments, professional athletes and Fortune 500 companies.

Husband-and-wife team Sid and Carole Miller have led a meditation group on the island for 24 years. They have seen it grow from four friends meeting in their living room to a large weekly gathering at the Bodhi Center, a meditation facility situated on five forested acres near the Gazzam Lake Nature Preserve. The regular Monday evening meeting includes 30 minutes of silent meditation, a 10-minute walking meditation and a discussion period. Their practice of “I LIKE IT because if you’re really stressed or worried about something, it puts your brain on an off switch so you can breathe and you don’t have to worry about other things.”—Elsa Wetzler, 10 insight meditation, like much of current American teaching, is based on the Buddhist Vipassana tradition. Carole explained, however, that it is compatible with any religion or with no religion at all. “For me, it’s not a religious practice,” she said. “I consider myself f a person who does Buddhist practices.”

Buddhists began touting the benefits of mindfulness and methodically charting the topography of the human mind more than 2,500 years ago. Over the past few decades, modern science has provided powerful evidence that they seem to have been on to something. Medical research has shown the benefits of meditation for diverse conditions including depression, insomnia, chronic pain, high blood pressure, asthma and psoriasis. Studies have also demonstrated that regular meditation improves concentration, calmness under stress and working memory—the immediate memory that guides decision-making and behavior.

Recent advances in imaging, which have allowed researchers to take a peek under the hood and look directly at the brains of meditators, have yielded surprising results. While it was long-held conventional wisdom that our brains stop changing after we reach adulthood, it is now recognized that the brain remains malleable throughout life and that our habits actively effect these changes—a concept known as neuroplasticity. Magnetic resonance imaging (MRI) research has shown that long-term meditators have more gray matter in the parts of the brain associated with working memory and high-level decision making than do non-meditators. Another MRI study proved how rapidly these changes might be achieved, with new meditators bulking up their gray matter after only eight weeks participation in a mindfulness program.

Research using functional MRI, an even newer technology which enables a real-time view of brain activity, showed that meditators are able to significantly dial down the default mode network, the part of the brain associated with mind-wandering and rumination.

And that’s something Anne Tilly has known all along. 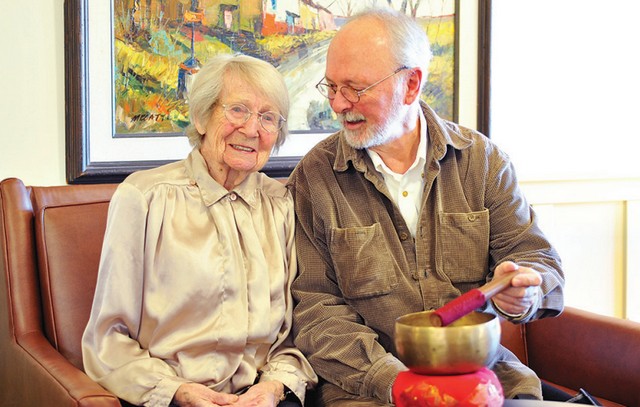 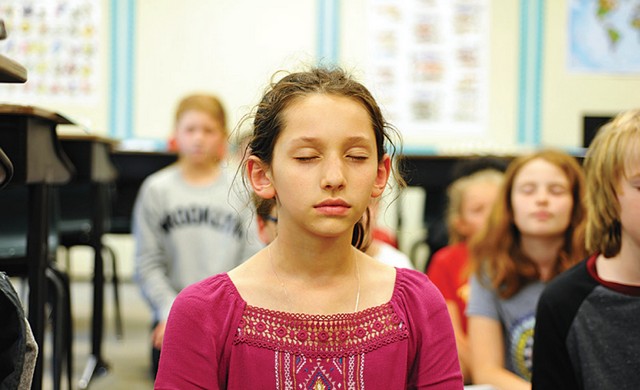